The Carolingian Dynasty (known variously as the Carlovingians or Karlings) was a dynasty of rulers who began as mayors of the palaces and eventually became kings of the Franks (751 C.E.). It is perhaps most noteworthy as the dynasty which resurrected the idea of a Western Roman Empire. The Carolingians succeeded the Merovingian Dynasty and continued to rule in some kingdoms until 987 C.E. The name Carolingian itself comes from Charles Martel (from the Latin Carolus Martellus), who defeated the Moors at the Battle of Tours in 732. The dynasty's most prominent member is Charlemagne, or Charles the Great (in Latin, Carolus Magnus), who was crowned Holy Roman Emperor in 800. The last Carolingian emperor died in 899 C.E., before the title had been in the family for a century. The Carolingian downfall was faster than its rise. However, it was a time of cultural revival and one in which Europe started to recover from the collapse of the Roman Empire. Many people looked to Christianity to make sense of life and to assist in the correct ordering of society.

The dynasty is usually considered to have been founded by Arnulf, bishop of Metz, in the early seventh century, who wielded a great deal of power and influence in the Merovingian kingdoms. His son, Ansegisel, married Saint Begga, the daughter of Pepin of Landen, and their son was Pepin of Heristal. It is from Pepin's grandfathers that the dynasty receives its earlier (pre-Martel) names: Arnulfing or Pippinid. The mayorlty of the palace of the kingdom of Austrasia began in the family with Ansegisel and continued with Pepin of Heristal. Pepin conquered Neustria at the Battle of Tertry in 687, and spread Arnulfing authority over all the Franks. Pepin was succeeded by his son, Charles Martel, as mayor, who in turn was the father of Pepin the Short. By this time, the Merovingian rois fainéants (do-nothing kings) had no power which the mayors had not already taken in the preceding century of minorities, regencies, and civil wars. Pepin was crowned king in 751, with the support of the leading Frankish nobles and Pope Zachary, after the last Merovingian king, Childeric III was deposed, tonsured, and put up in a monastery. Charlemagne, Pepin's son, became king of the Franks in 768, and was crowned emperor by Pope Leo III in 800. His son, Louis the Pious, was his sole successor, but upon Louis' death and the end of his unrestful reign, there followed three years of civil war between his sons: Lothair I, Louis the German, and Charles the Bald.

After the division of the empire between the three grandsons of Charlemagne with the Treaty of Verdun in 843, the Carolingians initially continued to hold the throne in all three sections that were created: West Francia, Middle Francia, and East Francia.

The lack of literate persons in eighth century western Europe caused problems for the Carolingian rulers by severely limiting the number of people capable of serving as court scribes. Of even greater concern to the very pious rulers was the fact that not all parish priests possessed the skill to read the Vulgate Bible. An additional problem was that the vulgar Latin of the later Western Roman Empire had begun to diverge into the regional dialects, the precursors to today's Romance languages, that were becoming mutually unintelligible and preventing scholars from one part of Europe being able to communicate with persons from another part of Europe. Alcuin (pictured center) was one of the leading scholars of the Carolingian Renaissance.

To address these problems, Charlemagne ordered the creation of schools and he also attracted many of the leading scholars of his day to his court. Among the learned men drawn to the court were Theodulf from Spain, the Frankish scholar Angilbert, and the Lombards Peter of Pisa and Paulinus of Aquileia. Chief among the scholars drawn to Charlemagne was Alcuin of York, a Northumbrian monk who served as head of the Palace School at Aachen.[1] The later courts of Louis the Pious and Charles the Bald had similar groups of scholars.

One of the primary efforts was the creation of a standardized curriculum for use at the recently created schools. Alcuin lead this effort and was responsible for the writing of textbooks, creation of word lists, and establishing the trivium and quadrivium as the basis for education.[2]

Other contributions from this period was the development of Carolingian minuscule, a "book-hand" first used at the monasteries of Corbie and Tours that introduced the use of lower case letters. A standardized version of Latin was also developed that allowed for the coining of new words while retaining the grammatical rules of Classical Latin. This Medieval Latin became the common language of scholarship and allowed administrators and travelers to make themselves understood across Europe.[3] 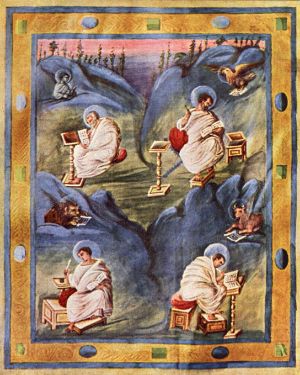 Carolingian art comprises the roughly 100 year period from about 800-900. Although brief, it was an influential period—northern Europe embraced classical Mediterranean Roman art forms for the first time, setting the stage for the rise of Romanesque art and eventually Gothic art in the West. Illuminated manuscripts, metalwork, small-scale sculpture, mosaics, and frescos survive from the period.

Carolingian architecture is the style of North European architecture promoted by Charlemagne. The period of architecture spans the late eighth and ninth centuries, until the reign of Otto I in 936, and was a conscious attempt to create a Roman Renaissance, emulating Roman, Early Christian, and Byzantine architecture, with its own innovation, resulting in having a unique character.

Charlemagne was faced with a variety of currencies at the start of reign. To correct problems theses various currencies cause, he standardized on a system based on a pound of silver (Livre tournois). Deniers were minted with a value of 240 deniers to a pound of silver. A second value, the solidus, was also created as an accounting device with a value of twelve deniers or one twentieth of a pound of silver. The solidus was not minted but was instead used to record values such as a "solidus of grain" which was equal to the amount of grain that twelve deniers could purchase.[4]

Retrieved from https://www.newworldencyclopedia.org/p/index.php?title=Carolingian_Dynasty&oldid=685356
Categories:
Hidden category:
This page was last edited on 3 April 2008, at 18:56.
Content is available under Creative Commons Attribution/Share-Alike License; additional terms may apply. See Terms of Use for details.