Pepin the Short or Pippin (714 – September 24, 768), often known as Pepin the Younger or Pepin III, was mayor of the palace of Austrasia and the King of the Franks, from 751 to 768, and is best known for being the father of Charlemagne, or "Charles the Great." His rule, while not as great as either his father's or son's, was historically important and of great benefit to the Franks as a people. It can certainly be argued that Pepin's assumption of the crown, and the title of Patrician of Rome, were harbingers of his son's imperial coronation, which is usually seen as the founding of the Holy Roman Empire. Charlemagne certainly made the Carolingians de jure what his father had made them de facto—the ruling dynasty of the Franks and the foremost power of Europe. While not known as a great general, he went undefeated militarily during his lifetime. 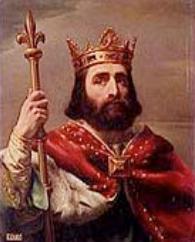 Pepin was born in 714, in Jupille, close to the city of Liège, in what is today Belgium, where the Carolingian dynasty originated. That territory was then a part of the kingdom of Austrasia. His father was Charles Martel, mayor of the palace and duke of the Franks, and his mother was Chrotrud. Pepin and his older brother, Carloman, were education by the monks of St. Denis. The monks greatly influenced the brothers during their formative years, heavily impacting their relationship with the church.

In 740, Pepin married Bertrada of Laon, his second cousin. Her father, Charibert, was the son of Pepin II's brother, Martin of Laon. Of their children, two sons and a daughter survived to adulthood.

On the death of Pepin's father, Charles Martel, in 741, power was passed down to Charles' legitimate sons, Carloman and Pepin as mayors of the palaces of Neustria and Austrasia respectively. Power may also have been intended for Charles' illegitimate son, Grifo, but he was imprisoned in a monastery by his two half-brothers. Carloman, who by all evidence was a deeply pious man, retired to a monastery in 747. This left Francia in the hands of Pepin as sole mayor of the palace and dux et princeps Francorum, a title originated by his grandfather and namesake Pepin of Heristal.

Under the reorganization of Francia by Charles Martel the dux et princeps Francorum were the commanders of the armies of the Kingdom, in addition to their administrative duties as mayor of the palace, and specifically commander of the standing guard, which Martel had begun maintaining year-around since Toulouse, in 721.

Upon their assumption, Pepin and Carloman, who had not proved themselves in battle, in defense of the realm, as their father had, installed the Merovingian Childeric III as king, even though Martel had left the throne vacant since the death of Theuderic IV. Childeric had the title of king, but he was a puppet. As time passed, and his brother bowed out of the picture, Pepin became discontent with the presence of any royal power but himself.

At the time of Carloman's retirement, Grifo escaped his imprisonment and fled to Duke Odilo of Bavaria, who was married to Hiltrude, Pepin's sister. Odilo was forced by Pepin to acknowledge Frankish overlordship, but soon died. Pepin invaded Bavaria and installed Tassilo III as duke under Frankish overlordship. 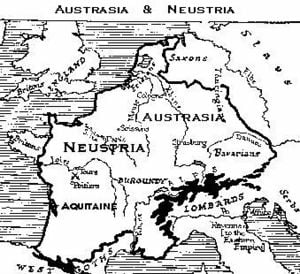 The locations of Austrasia and Neutrasia shown in a demographic Map of Eighth century Europe.

Since Pepin had control over the magnates and actually had the power of the king, he decided it was time to do what his father had never bothered to do, make the Carolingian name royal in law as well as fact. Pepin asked Pope Zachary who the royal ruler should be: The person with the title of King, or the person who makes the decisions as King. Since the Pope depended on the Frankish armies for his independence, and had depended on them for protection from the Lombards since the days of Charles Martel, and Pepin, as his father had, controlled those armies, the Pope's answer was determined well in advance. The Pope agreed that the de facto power was more important than the de jure power. Thus, Pepin, having obtained the support of the papacy, discouraged opposition to his house. He was elected King of the Franks by an assembly of Frankish leading-men (it must be noted he had a large portion of his army on hand, in the event that the nobility inclined not to honor the Papal Bull) and anointed at Soissons, perhaps by Boniface, Archbishop of Mainz, who, along with his niece, Saint Leoba, was a court adviser. Meanwhile, Grifo continued his rebellion, but was eventually killed in the battle of Saint-Jean de Maurienne, in 753.

Childeric III was deposed, his hair was shaved off, and he was confined to a monastery. He was the last of the Merovingians.

Expansion of the Frankish realm

Pepin added to his power after Pope Stephen II traveled all the way to Paris to anoint him in a lavish ceremony at Saint Denis Basilica, bestowing upon him the additional title of patricius Romanorum (Patrician of the Romans). As life expectancies were short in those days, and Pepin wanted family continuity, the Pope also anointed Pepin's sons, Charles (eventually known as Charlemagne) and Carloman.

Pepin's first major act was to go to war against the Lombard king Aistulf, who had a policy of expansion into the ducatus Romanum, as a partial repayment for papal support in his quest for the crown. Victorious, he forced the Lombard king to return property seized from the Church and confirmed the papacy in possession of Ravenna and the Pentapolis, the so-called Donation of Pepin, whereby the Papal States was founded. In 759, he drove the Saracens out of Gaul with the capture of Narbonne and then consolidated his power further by integrating Aquitaine into the kingdom. In taking Narbonne, and formally annexing Aquitaine (whose status was always dependent on the strength of her suzerains), he completed the work of his father save for one last task: Fully subduing the Saxons. He was preparing for war against them when his health began to fail, and thus, this final task was left for his son, Charlemagne.

Pepin died at Saint Denis in 768, and is interred there in the basilica with his wife, Bertrada. Pepin was buried "outside that entrance (of St. Denis basilica), face down, for the sins of his father, Charles Martel."[1] Historical opinion often seems to regard him as the lesser son and lesser father of two greater men, though a great man in his own right. He continued to build up the heavy cavalry which his father had begun and maintained, the standing army that his father had found necessary to protect the realm and form the core of its full army in wartime. Pepin not only maintained his father's policy of containing the Moors, he drove them over and across the Pyrenees with the capture of Narbonne. He continued his father's expansion of the Frankish church (missionary work in Germany and Scandinavia) and the infrastructure (feudalism) that would prove the backbone of medieval Europe.