Gamete is a reproductive cell, normally haploid (one set of chromosomes), that is specialized for fusion with another gamete during fertilization (conception) in organisms that sexually reproduce. These gametes that are fusing may be of similar size (isogamy) or they may be different in size (anisogamy or heterogamy), with the female gamete larger and nonmotile and referred to as the egg or ovum and the male gamete smaller and motile and referred to as sperm or spermatozoon.

Through the process of creating gametes (gametogenesis) and their fusion, new organisms are created that are different from the two parents, resulting in increasing genetic diversity.

Sexual reproduction is a process of biological reproduction whereby organisms create offspring that have a combination of genetic material contributed by two different gametes. A gamete is a mature reproductive or sex cell.

In most cases, this gamete or reproductive cell is haploid, while the somatic or body cell of the organism is diploid. That is, a somatic cell has a paired set of chromosomes; the haploid reproductive cell has a single set of unpaired chromosomes, or one half the number of chromosomes of a somatic cell. When the haploid gametes fuse, they form a diploid organism. However, in some cases, a gamete may be diploid (Crouch et al. 1998; Foyn 1962) or exhibit polyploidy. For example an organism may be a tetraploid (having four sets of chromosomes) and one way that such a tetraploid can be created is when there is a union of diploid (2n) gametes (Elrod and Stansfield 2002). (Tetraploids also may be produced by a somatic doubling of chromosome number or other means.) There also can be the fusing of diploid gametes and haploid gametes to give triploid organisms, and so forth.

Depending on the species, gametes may be of the same size or of different sizes. In species that produce two morphologically distinct types of gametes, and in which each individual produces only one type, a female is any individual that produces the larger, generally non-motile type of gamete—called an ovum (or egg)—and a male produces the smaller tadpole-like type—called a sperm. This is an example of anisogamy or heterogamy, the condition wherein females and males produce gametes of different sizes. (This is the case in humans; the human ovum is approximately 20 times larger than the human sperm cell). In contrast, isogamy is the state of gametes from both sexes being the same size.

Gametes carry half the genetic information of an individual. In humans, where males have an X and a Y chromosome and females have two Y chromosomes, an ovum can only carry the X chromosome (of the X and Y chromosomes) whereas a sperm can carry either an X or a Y. Hence, the gender of any resulting zygote depends on whether the fusing sperm carries the X or the Y chromosome. In other words, due to the presence of the Y chromosome exclusively in the sperm, it is that gamete alone which can determine that an offspring will be a male.

The name gamete was introduced by the Austrian biologist Gregor Mendel. It comes from the Ancient Greek γαμέτης, which is translated gamete, meaning "wife," and gametes, meaning "husband."

The production of gametes is termed gametogenesis. In diploid organisms, it is a process by which diploid or haploid precursor cells undergo cell division and differentiation to form mature haploid gametes. Depending on the biological life cycle of the organism, gametogenesis occurs by meiotic division of diploid gametocytes into various gametes or by mitotic division of haploid gametogenous cells. For example, in vertebrates, meiosis in diploid organisms reduces the number of sets of chromosomes from two to one (i.e., produces haploid gametes from diploid gametocytes). On the other hand, plants may produce gametes through mitosis in gametophytes. The gametophytes grow from haploid spores after sporic meiosis. The existence of a multicellular, haploid phase in the life cycle between meiosis and gametogenesis is also referred to as alternation of generations.

Organs that produce gametes are called gonads in animals, and archegonia or antheridia in plants. 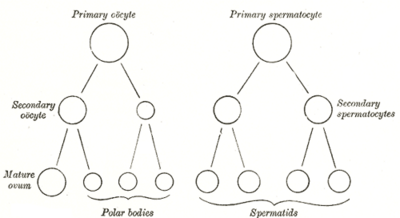 Scheme showing analogies in the process of maturation of the ovum and the development of the spermatids, following their individual pathways. The oocytes and spermatocytes are both gametocytes. Ova and spermatids are complete gametes.

Animals produce gametes directly through meiosis in the organs called gonads. Males and females of a species that reproduces sexually have different forms of gametogenesis:

However, before turning into gametogonia, the embryonic development of gametes is the same in males and females.

From gametogonia, male and female gametes develop differently—males by spermatogenesis and females by oogenesis. However, by convention, the following pattern is common for both:

Fungi, algae, and primitive plants form specialized haploid structures called gametangia where gametes are produced through mitosis. In some fungi, for example zygomycota, the gametangia are single cells on the end of hyphae and acting as gametes by fusing into a zygote. More typically, gametangia are multicellular structures that differentiate into male and female organs:

A gamete of one generation ultimately creates gametes in the next generation, while retaining the same quantity of genetic information.

Gametes typically are haploid cells; that is, they contain one half a complete set of chromosomes (the actual number varies from species to species). When two gametes fuse (in animals typically involving a sperm and an egg), they form a zygote—a cell that has two complete sets of chromosomes and therefore is diploid. The zygote receives one set of chromosomes from each of the two gametes through the fusion of the two gamete nuclei. After multiple cell divisions and cellular differentiation, a zygote develops, first into an embryo, and ultimately into a mature individual capable of producing gametes.

In contrast to a gamete, the diploid somatic cells of an individual contain one copy of the chromosome set from the sperm and one copy of the chromosome set from the egg; that is, the cells of the offspring have genes expressing characteristics of both the father and the mother. A gamete's chromosomes are not exact duplicates of either of the sets of chromosomes carried in the somatic cells of the individual that produced the gametes. They can be hybrids produced through crossover (a form of genetic recombination) of chromosomes, which takes place in meiosis. This hybridization has a random element, and the chromosomes tend to be a little different in every gamete that an individual produces. This recombination and the fact that the two chromosome sets ultimately come from either a grandmother or a grandfather on each parental side account for the genetic dissimilarity of siblings.