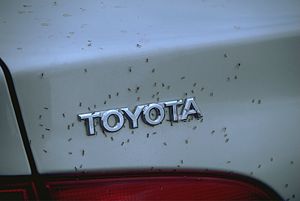 Midges on a car

Midge is the common name for a small, fragile, flying insects belonging to the order Diptera ("true flies"). They are generally grouped as non-biting midges (family Chironomidae), biting midges (family Ceratopogonidae), and gall midges (family Cecidomyiidae). Like other dipterans (mosquitoes, flies), midges have a single pair of true wings, which are used for flight, while the hind wings are reduced into a pair of small knob-like structures called the halteres.

Non-biting midges are generally harmless, while the females of most species of biting midges require a blood meal and can be especially annoying pests or even vectors of disease. The vicious reputation of some biting midge species has even hurt tourism. Gall midges can cause plant galls, a tissue swelling induced by the chemicals injected by the larvae or the adults. After the galls are formed, the larvae develop inside until fully grown, at which time they leave, sometimes as adults. As such, some species can cause significant crop damage.

However, midges also provide important ecological and economic values as well, contributing to the ecosystem and directly or indirectly to human well-being. Some species, including the males of some biting midges, are important pollinators, such as for cacao crops. Even some of the species of the gall midges, known for crop damage, are natural enemies of other crop pests, consuming or parasitizing aphids, spider mites, scale insects and so forth. Likewise, bloodworms, the blood-red, aquatic larvae of some of the members of the midge family Chironomidae, are an important food source for fish and other aquatic animals, as are larvae of other midges. Some larvae are indicator organisms in terms of aquatic pollutants and the orange wheat blossom midge is a standard research animal used for the testing of pesticides.

Midges are at their worst on still, damp cloudy days. They do not like direct sunlight or high winds because their flight speed is less than human walking pace. This is why midges cannot immediately follow a person when running, although they can quickly gather again if a person stops moving.

A flightless midge species, Belgica antarctica, holds the distinction of being the largest land animal found on the continent of Antarctica.

Chironomidae, known informally as chironomids or non-biting midges, are a family of mosquito-like dipterans with a global distribution. Although many species superficially resemble mosquitoes, they lack the wing scales and elongate mouthparts of the Culicidae.

Chironomidae is a large group of insects with over five thousand described species and seven hundred species in North America alone. Males are easily recognized by their plumose antennae.

Larvae can be found in almost any aquatic or semiaquatic habitat, including treeholes, bromeliads, rotting vegetation, soil, and in sewage and artificial containers. Larvae of some species are bright red in color due to hemoglobin; these are often known as "bloodworms." Larvae are important as food items for fish and other aquatic organisms. They are also important as indicator organisms; for example, the presence or absence of various species in a given body of water can give a good idea of what kinds of pollutants may be present and in what quantities.

Adults can be pests when they emerge in large numbers. They can damage paint, brick, and other surfaces with their droppings, and when large numbers of adults die they can build up into malodorous piles. They also can provoke allergic reactions in sensitive individuals.

Ceratopogonidae, known informally as biting midges (or, in the United States, no-see-ums, sand flies, punkies, and others), are a family of small flies (1-4 millimeters long) in the order Diptera. They are found in almost any aquatic or semiaquatic habitat throughout the world.

While male biting midges only feed on nectar, females of most Ceratopogonidae species are adapted to suck blood from some kind of host animal, requiring protein to produce eggs. Members of the genera Culicoides, Forcipomyia (Lasiohelea), and Leptoconops suck vertebrate blood. Some Atrichopogon and Forcipomyia are ectoparasites on larger insects. Dasyhelea feed exclusively on nectar. Species in some other genera are predatory on other small insects.

Adult midges fly in swarms and usually do not stray too far from their breeding grounds.

Larvae are always found in some damp location, such as under bark, in rotten wood, compost, mud, stream margins, tree holes, or water-holding plants (i.e., phytotelmata).

Many of the blood-sucking or blood-feeding species are pests in beach or mountain habitats. Some are vectors of disease-causing viruses, protozoa, and filarial worms. However, some are likewise important pollinators of tropical crops, such as cacao.

The Highland midge is found in large numbers in the Scottish Highlands. They are famously vicious and have become something of a cultural icon in Scotland, as well as a detriment to tourism. They were also a favorite subject of author Vladimir Nabokov. Irish midges have a similarly fearsome reputation.

Cecidomyiidae (sometimes misspelled Cecidomyidae), known informally as gall midges or gall gnats, are a family of very fragile, small, hairy-winged insects in the order Diptera. As the common name implies, the larvae of most gall midges feed within plant tissue, creating abnormal plant growths called galls. Gall midges are usually only 2-3 millimeters in length and many are less than one millimeter long. Their characteristic hairy wings are unusual in the order Diptera and have long antennae.

Worldwide there are over three thousand known species of Cecidomyiidae, but since 1,100 are from well-studied North America, it is clear this is an underestimate.

Curiously, a large number of species are natural enemies of other crop pests. The larvae of some of these species are predaceous and some are reported as parasites. The most common prey are aphids and spider mites, followed by scale insects. Other small prey include whiteflies and thrips and many eat the eggs of other insects or mites.

Because the tiny larva are incapable of moving considerable distances, there usually has to be a substantial population of prey present before the adults will lay eggs and Cecidiomyiidae are most frequently seen during pest outbreaks. One species Aphidoletes aphidomyza is an important component of biological control programs for greenhouse crops and is widely sold in the United States of America.

Cecidomyiidae are also known for the strange phenomenon of paedogenesis in which the larval stage reproduces without maturing first. Even stranger in some species, the daughter larvae produced within a mother larva consume the mother and in others the reproduction occurs in the egg or pupa.

In South Africa, midges are universally known as "miggies," the Afrikaans word for midge, while in Singapore, they are known commonly as sandflies. In the United States, regional terminology for adult, non-biting midges includes "muffleheads" and "muckleheads" in northern Ohio and "blind mosquitoes" in Florida. Adult non-biting midges are known as "lake flies" in parts of Canada.

Retrieved from https://www.newworldencyclopedia.org/p/index.php?title=Midge&oldid=1086518
Categories:
Hidden category:
This page was last edited on 9 November 2022, at 17:34.
Content is available under Creative Commons Attribution/Share-Alike License; additional terms may apply. See Terms of Use for details.