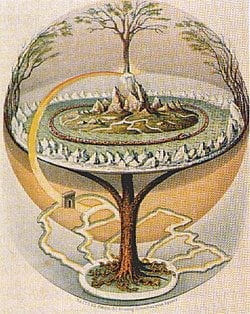 This illustration shows a nineteenth-century attempt to visualize the world view of Norse cosmology as described by the Prose Edda.

Midgard (an Anglicized form of Old Norse Miðgarðr) is the old Germanic name for the mortal realm, whose name literally means "middle enclosure." This etymology could reflect the fact that Midgard was understood to reside at the approximate mid-point of Yggdrasill (the world tree), where it was completely surrounded by an impassable sea.

The interconnection between the sacred and profane world, termed the axis mundi by noted scholar of religion Mircea Eliade, undergirds a profound religious truth: namely, that the world of the Divine is accessible to mortals. In this way, the idea of an axis mundi (represented, in this case, by Yggdrasill) provides a potent metaphor for understanding the relationship between earthly matter and divine substance. The image of an interconnected cosmos represents one culture's historical attempt to conceptualize such a theologically complex relationship. The centrality of the notion to the early Germanic and Scandinavians is attested to by the linguistic commonalities in representations of this term.[1]

Midgard in a Norse Context

As one of the major realms in the Norse cosmology, Midgard belonged to a complex religious, mythological and cosmological belief system shared by the Scandinavian and Germanic peoples. This mythological tradition developed in the period from the first manifestations of religious and material culture in approximately 1000 B.C.E. until the Christianization of the area, a process that occurred primarily from 900-1200 C.E.[2]

Within this framework, Norse cosmology postulates a universe divided into nine interrelated realms, some of which attracted considerably greater mythological attention. Of primary importance was the threefold separation of the universe into the realms of the gods (Asgard and Vanaheim, homes of the Aesir and Vanir, respectively), the realm of mortals (Midgard) and the frigid underworld (Niflheim), the realm of the dead. These three realms were supported by an enormous tree (Yggdrasil), with the realm of the gods ensconced among the upper branches, the realm of mortals approximately halfway up the tree (and surrounded by an impassable sea), and the underworld nestled among its roots. The other realms included Alfheim, world of the elves; Svartálfheim, home of the dark elves; Nidavellir, world of the dwarves (tiny men who were incomparable miners and goldsmiths), Jotunheim, world of the Jotun (giants), and Muspelheim, the hellish fire-realm that was home to Surt, a flame giant who would fight against the Aesir at Ragnarök.

As mentioned above, Midgard is the "middle-realm" in the Norse cosmos, situated in the branches of Yggdrasill between Asgard (the home of the gods) above and Niflheim (the frigid home of the dead) below. It is encircled by the enormous form of Jormungandr, the Midgard Serpent, whose body is so gigantic that it wraps around the entire human plane, allowing it to grasp its own tail.

As residents of this realm, humans are under the protection of Thor, who is occasionally referred to by the kenning "Defender of Ásgard and of Midgard,"[3] and under the watchful eye of Odin, who surveils the land each day with the help of his two supernatural ravens:

O'er Mithgarth Hugin and Munin both
Each day set forth to fly.[4]

It should be noted that some of the Norse mythic sources feature some ambiguity concerning the precise referent of the term "Midgard." While some authors use it to describe the mortal realm (as discussed), others use it to denote an impassable mountain range that circumscribes the human world—a barrier purposefully erected by the gods to prevent hostile incursions by the Jotun. To add additional confusion, Orchard notes that "in many places in Snorri's works, however, the term Midgard appears to refer less specifically to the dwelling of men than that of men and Aesir toghter, as opposed to the dwelling of the giants."[5]

As in many mythological traditions, the creation of the cosmos was not accomplished ex nihilo. Instead, the mortal realm was understood to have been created by the Son's of Bor (Odin, Vili, and Vé) from the flesh of Ymir, the primordial giant (who, in some accounts, was the first living being in the universe). Further, this origin point remains constant, regardless of whether Midgard is being interpreted as the human world (as a whole) or simply as the mountain range bounding it.

The Völuspá provides an account of the creation of the entire mortal realm:

Then Bur's sons lifted | the level land,
Mithgarth [Midgard] the mighty | there they made;
The sun from the south | warmed the stones of earth,
And green was the ground | with growing leeks.[6]

Conversely, Snorri Sturluson's Gylfaginning provides a description of the creation of a boundary around the world of the primeval humans:

But on the inner earth they made a citadel round about the world against the hostility of the giants, and for their citadel they raised up the brows of Ymir the giant, and called that place Midgard.[7]

This second perspective is also echoed in the Grimnismol:

Mithgarth the gods | from his eyebrows made,
And set for the sons of men;
And out of his brain | the baleful clouds
They made to move on high.[8]

According to the Eddas, Midgard will be destroyed in Ragnarök, the apocalytpic battle at the end of time. First, Jormungand will rise from the ocean, poisoning the land and sea with his venom and causing the sea to rear up and lash against the land. More significantly, Surtr (the fire giant) will end the conflict by razing the earth with a hellacious deluge of flame:

The sun turns black, | earth sinks in the sea,
The hot stars down | from heaven are whirled;
Fierce grows the steam | and the life-feeding flame,
Till fire leaps high | about heaven itself.[9]

However, after the proverbial dust has settled, Midgard will again emerge, and will in fact be more hospitable and fertile than ever before:

Now do I see | the earth anew
Rise all green | from the waves again;
The cataracts fall, | and the eagle flies,
And fish he catches | beneath the cliffs.[10]

Although most surviving instances of the word refer to spiritual matters, it was also used in more mundane situations to refer to the human world. For example, the runestone Sö 56 depicts two brothers (Holmsteinn and Hásteinn) who called themselves the "most skilled in runes in all of Midgard".[11] The Eddic poem Hyndluljoth uses the term in a similarly general way:

Who are the free-born, | who are the high-born,
The noblest of men | that in Mithgarth [Midgard] dwell?"[12]

The noun "middangeard" occurs half a dozen times in the Anglo-Saxon epic poem Beowulf, and is the same word as "Midgard" in Old Norse. The term is equivalent in meaning to the Greek term Oikoumene, and can be glosssed as "orbis uel cosmus ("world or cosmos")."[13] The term remains common in extant Middle English texts. Though the definition did not change, writers began to equate the term with a "Middle Earth" instead of a "Middle Enclosure" or "Middle Realm" (as was the case in the Norse texts). An early example of this transformation can be seen in the Ormulum (the writings of a twelfth-century Christian theologian):

that our Lord wanted / be born in this middle-earth.[14]

Mittilagart is mentioned in the ninth century Old High German text, Muspilli. In this work as well, the term is understood to denote "the earthly world," as opposed to the sea and the heavens:

Retrieved from https://www.newworldencyclopedia.org/p/index.php?title=Midgard&oldid=723040
Categories:
Hidden category:
This page was last edited on 31 May 2008, at 16:50.
Content is available under Creative Commons Attribution/Share-Alike License; additional terms may apply. See Terms of Use for details.