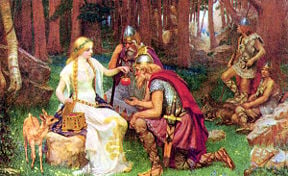 The Norse gods were mortal, and only through Iðunn's apples could they hope to live until Ragnarök (J. Penrose, 1890)

The Vanir are one of the two groups of gods in Norse mythology, the other being the comparatively better-known Aesir. However, while Aesir is occasionally used as a blanket term to describe all Norse deities, Vanir is not.[1] It refers to an explicitly separate sub-section of the pantheon, with ties to fertility, sexuality, and worldly prosperity (which, in turn, is a dramatic divergence from the general Norse mythological obsession with raiding, battle, and physical prowess). The term "vanir" likely derives from the Proto-Indo-European root *wen, which is related etymologically "to words in other [Indo-European] languages meaning 'pleasure' or 'desire.'"[2] The best known members of the Vanir are Njord, Freyr, and Freyja.

As Norse deities, the Vanir belonged to a complex religious, mythological and cosmological belief system shared by the Scandinavian and Germanic peoples. This mythological tradition, of which the Scandinavian (and particularly Icelandic) sub-groups are best preserved, developed in the period from the first manifestations of religious and material culture in approximately 1000 B.C.E. until the Christianization of the area, a process that occurred primarily from 900-1200 C.E.[3] While the tales recorded within this mythological corpus tend to exemplify a unified cultural focus on physical prowess and military might, the Vanir were seen to provide a valuably different perspective.

The Vanir in Norse Mythology

Within this framework, Norse cosmology postulates three separate "clans" of deities: the Aesir, the Vanir, and the Jotun. The distinction between Aesir and Vanir is relative, for the two are said to have made peace, exchanged hostages, intermarried and reigned together after a prolonged war. In fact, the most significant divergence between the two groups is in their respective areas of influence, with the Aesir representing war and conquest, and the Vanir representing exploration, fertility and wealth.[4] The Jotun, on the other hand, are seen as a generally malefic (though wise) race of giants who represented the primary adversaries of the Aesir and Vanir. The gods (both Aesir and Vanir), though immortal, were somewhat more "perishable" than their Indo-European brethren. Not only was their eternal youth maintained artificially (through the consumption of Iðunn's golden apples), they could also be slain (for instance, many were preordained to perish at the cataclysmic battle of Ragnarök).

The multifarious forms of interaction between the Aesir and the Vanir present an oft-addressed conundrum for scholars of myth and religion. Unlike other polytheistic cultures, where families of gods were typically understood as "elder" or "younger" (as with the Titans and the Olympians of ancient Greece), the Æsir and Vanir were portrayed as contemporary. The two clans fought battles, concluded treaties, and exchanged hostages. Given the difference between their roles/emphases, some scholars have speculated that the interactions between the Aesir and the Vanir reflect the types of interactions that were occurring between social classes (or clans) within Norse society at the time.[5]

According to another theory, the Vanir (and the fertility cult associated with them) may be more archaic than that of the more warlike Aesir, such that the mythical war may mirror a half-remembered religious conflict.[6] Another historical perspective is that the inter-pantheon interaction may be an apotheosization of the conflict between the Romans and the Sabines.[7] Finally, the noted comparative religion scholar Mircea Eliade speculated this conflict is actually a later version of an Indo-European myth concerning the conflict between and eventual integration of a pantheon of sky/warrior/ruler gods and a pantheon of earth/economics/fertility gods, with no strict historical antecedents.[8]

The Vanir and the Elves

The Poetic Edda suggests a possible identification between the Vanir with the elves (Alfar), frequently interchanging "Aesir and Vanir" and "Aesir and Alfar" to mean "all the gods."[9] As both the Vanir and the Alfar were fertility powers, the interchangeability suggest that the Vanir may have been somehow associated with the elves. It may also be that the two groups reflected a difference in status, where the elves and the Vanir were minor and major fertility (respectively).[10] This identification is further attested to by un-elaborated connection between Freyr and Álfheim (the world of the elves), which is described in the Eddic Poem Grimnismol:

And Alfheim the gods | to Freyr once gave
As a tooth-gift in ancient times.[11]

The Vanir in Norse Cosmology

The Vanir, as a group, are thought to hail from Vanaheimr (which is also called Vanaland).[12] However, this realm is often subsumed into Asgard (the realm of the Aesir) in Norse cosmology.

One exception to this general tendency can be seen in the twelfth-century Icelandic historian Snorri Sturluson's euhemeristic Ynglinga Saga, which assumes that the Vanir were once a human tribe corresponding to a particular territory:

The country of the people on the Vanaquisl was called Vanaland, or Vanaheim; and the river separates the three parts of the world, of which the eastermost part is called Asia, and the westermost Europe.[13]

In general, the Vanir were differentiated from the Aesir by their patronage of (and association with) certain realms of embodied experience, most notably fertility, maritime life (especially navigation), and material success. Further, they (especially Freyja) were associated with prophecy and the magical arts. Their differences with the Aesir also include sexual behaviour, as they were said to have practiced endogamy and even incest.[14] As DuBois notes,

The deities of the earth—the Vanir of Scandinavian texts—were on the whole a passionate, lascivious lot. Within the worldview of early agriculturalists, the magic of natural regeneration—the very basis of agriculture—leads naturally to magic of other types. The Eddaic poem Völuspá depicts Vanir magic as a redolent, intoxicating force, wielded with might and success against the weapons of the Aesir. In his discussion of Vanir gods Freyja, Freyr, and Njord in the Prose Edda. Snorri portrays the deities as exotics, possessed of their own strange customs, such as incest, and given to fits of rage and desire.[15]

Further, the gods Njörd and Freyr appear in Snorri's Ynglinga saga as euhemerized Kings of Sweden. For this reason, their mythological descendants on the Swedish throne could also be called Vanir. They include:

The initial conflict between the Aesir and the Vanir is described in two primary mythic sources: the Völuspá and the euhemeristic Ynglinga Saga. According to the former source, the initial cause for the hostilities is the Aesir's mistreatment of Gullveig ("Gold-Might"—a possible pseudonym of Freyja):

The war I remember, | the first in the world,
When the gods with spears | had smitten Gollveig,
And in the hall | of Hor had burned her,
Three times burned, | and three times born,
Oft and again, | yet ever she lives.[20]

Conversely, the Ynglinga Saga (which describes the Aesir and Vanir as two contending tribes) simply portrays the conflict as a battle for contested territory:

Odin went out with a great army against the Vanaland people; but they were well prepared, and defended their land; so that victory was changeable, and they ravaged the lands of each other, and did great damage.[21]

Tiring of this constant strife, the two groups sued for peace and agreed to exchange hostages to ensure their mutual compliance with the treaty. In good faith, the Vanir sent the best of their clan (Njord, Freyr, and Freyja). The Aesir, on the other hand, sent the wise Mimir but also the terminally inept Hœnir.

In an intriguing nod to the theorists who speculate that this conflict symbolizes an altercation between religious world-views, the Völuspá seems to suggest that the negotiation process involved a discussion of which group was a fitting subject for worship:

Then sought the gods | their assembly-seats,
The holy ones, | and council held,
Whether the gods | should tribute give,
Or to all alike | should worship belong.[22]

Retrieved from https://www.newworldencyclopedia.org/p/index.php?title=Vanir&oldid=993347
Categories:
Hidden category:
This page was last edited on 15 January 2016, at 17:31.
Content is available under Creative Commons Attribution/Share-Alike License; additional terms may apply. See Terms of Use for details.