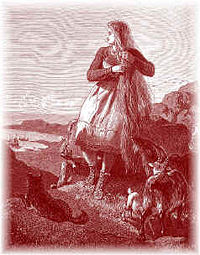 An etching of Skaði, by Frølich.

In Norse mythology, Skaði (Anglicized as Skadi) is a female giant, daughter of Thjazi, wife of Njord, and stepmother of Freyr and Freyja. She is esteemed as a huntress and is known as the "Snowshoe Goddess" for her connection to the frozen wilderness.

Skadi is best known in conjunction with her husband (Njord) and her step-children (Freyr and Freyja). She is a bold and courageous female character in the Norse epics, who challenged male-dominated society by demanding that the Æsir (a clan of gods) compensate her for the death of her father.

Skadi's name means "damage" or "shade," which reflects a possible belief in her status as a frost-giant and a bringer of cold, winter, and death.[1] It is believed by some mythologists that in the early days of Norse mythology, Skaði was venerated as a goddess of the hunt, and rivaled the goddesses Frigg and Freyja in terms of significance and popularity. However, she seems to have faded into the background during the progression of Scandinavian beliefs, and little of her memory survives in lore or artifact. Despite this fact, it is noted that:

Skadi is made to boast [in the mythic corpus] of her temples and sanctuaries. [Further,] a number of place names, particularly in eastern Sweden, are believed to represent an original Skađavé (Skadi's temple), Skađalundr (Skadi's grove) and suchlike.[2]

Both of these factors provide cogent support for the theory of Skadi's erstwhile importance.

Further, since Skadi is a giantess (perhaps of frost-giant stock), her marriage to Njord, which parallels Freyr's marriage to Gerd, presents an intriguing mythological puzzle. What is the meaning of a union between a fertility god and a goddess of winter? Scholarly opinion on this issue varies, with some arguing for a socio-historical perspective (that, "because of their lower hierarchical status, the vanir cannot choose wives from among the aesir and must take them from the giants")[3] and others arguing for a metaphorical perspective (that "in Norse myths, as in others, fertility and death are intimately related").[4]

Skadi in a Norse context

As a Norse deity, Skadi belonged to a complex religious, mythological, and cosmological belief system shared by the Scandinavian and Germanic peoples. This mythological tradition, of which the Scandinavian (and particularly Icelandic) sub-groups are best preserved, developed in the period from the first manifestations of religious and material culture in approximately 1000 B.C.E. until the Christianization of the area, a process that occurred primarily from 900-1200 C.E.[5] The tales recorded within this mythological corpus tend to exemplify a unified cultural focus on physical prowess and military might.

Within this framework, Norse cosmology postulates three separate "clans" of deities: The Aesir, the Vanir, and the Jotun. The distinction between Aesir and Vanir is relative, for the two are said to have made peace, exchanged hostages, intermarried, and reigned together after a prolonged war. In fact, the most significant divergence between the two groups is in their respective areas of influence, with the Aesir representing war and conquest, and the Vanir representing exploration, fertility and wealth. The Jotun, on the other hand, are seen as a generally malefic (though wise) race of giants who represented the primary adversaries of the Aesir and Vanir.

Skadi was best known in conjunction with her husband (Njord) and her step-children (Freyr and Freyja). However, her attested affiliation with hunting and hunters suggests that she may, at one time, have been a more important figure than the surviving literature suggests.

Skadi was known for her familial connections to Njord (and, indirectly, to Freyr and Freyja). However, the giantess was primarily renowned for her devotion to her murdered father (the giant Thjazi)[6] and she is described as continuing to dwell in her father's ancestral keep:

The sixth [heavenly abode] is Thrymheim, | where Thjazi dwelt,
The giant of marvelous might;
Now Skathi abides, | the god's fair bride,
In the home that her father had.[7]

Although Skadi was a giantess, she (similar to Loki) was traditionally counted among the Æsir, as evidenced by poetic kennings that describe her as a goddess and by various lists of Ásynjur (female Aesir) throughout Skáldskaparmál that include her name.[8]

Aside from her familial connections (and her general grouping with female Aesir), Skadi also possessed an interesting and distinctive character. In a "gender-bending" move, the giantess took it upon herself to visit Asgard and demand vengeance for her father's death. Furthermore, she was affiliated with the stereotypically male pursuits of tracking and hunting: "And she goes, for the more part on snow-shows and with a bow and arrow, and shoots beasts; she is called Snowshoe-Goddess or Lady of the Snowshoes."[9]

After the death of Skadi's father (the giant Thjazi), the giantess armed herself and sallied out to Asgard to seek revenge. However, instead of agreeing to battle, the gods demurred, offering her "reconciliation and atonement" for her loss. This reconciliation took two forms: First, they promised the giantess her choice of husbands from among the Aesir (albeit with a peculiar proviso); and, second, they offered to make her laugh (as she was broken-hearted from the death of her father and thought that she would never laugh again).

In fulfilling the first condition, the assembled Aesir stated that she could select "for herself a husband from among the Aesir and choose by the feet only, seeing no [other part of his body to make her decision]."[10] Walking down the line of eligible gods, the giantess selected the most graceful pair of feet—assuming that they belonged to the beautiful Balder. To her surprise, they belonged to the much older Njord, who agreed to be her husband.

Next, in attempting to provoke a response from the giantess, Loki performed a masochistically vulgar (though comedic) act, namely tying one end of a cord around the beard of a goat and the other end around his testicles. The god then goaded the goat to run, and "each gave way in turn, and each of the two screeched loudly; then Loki let himself fall onto Skadi's knee [perhaps causing further damage to his private parts], and she laughed."[11] Thus, the Aesir fulfilled the requirements of the reconciliation. Additionally, to further commemorate the giant's death, it is said that Odin "took Thjazi's eyes and cast them up into the heavens, and made of them two stars,"[12] ensuring that part of him would live forever.

Though the two attempted to make the best of their union, their differences made this difficult. Skadi's mountain homeland was too bleak and desolate for the sea-god, and Njord's seaside abode was too damp for his giant bride. As a compromise, they decided to alternate, first spending nine days in Nóatún, followed by nine in Thyrmheim (Skadi's father's erstwhile abode). Snorri's Gylfaginning describes the response of the couple to this arrangement:

But when Njordr came down from the mountain back to Nóatún, he sang this lay:
Loath were the hills to me, I was not long in them,
Nights only nine;
To me the wailing of wolves seemed ill,
After the song of swans.
Then Skadi sang this:
Sleep could I never on the sea-beds,
For the wailing of waterfowl;
He wakens me, who comes from the deep
The sea-mew every morn.[13]

In some sources, it is suggested that the two ultimately separated and that Skadi returned to Thrymheim.

The euhmeristic account in the Ynglinga saga expands upon the suggestion that Njord and Skadi separated, stating that after leaving Njord (a royal hostage), she married Odin (the king). In this relationship, she bore him many sons, some of whom would allegedly go on to found a Scandinavian royal dynasty. These noble offspring were immortalized in many heroic odes, one of which is quoted in the saga itself:

To Asa's son Queen Skade bore
Saeming, who dyed his shield in gore,—
The giant-queen of rock and snow,
Who loves to dwell on earth below,
The iron pine-tree's daughter, she
Sprung from the rocks that rib the sea,
To Odin bore full many a son,
Heroes of many a battle won.[14]

In addition to the accounts described above, Skadi plays a small role in a number of other important tales. For example, she figures into some versions of the Skírnismál, which describes Freyr's yearning for the giantess Gerd. In it, Skadi prompts the god's servant (Skirnir) to involve himself in assuaging his master's heart-sickness.[15]

More significantly, Skadi is also involved the events following Balder's death. After Loki orchestrates the murder of the beloved god, he is punished by being bound to a rock beneath the world with the entrails of his son. As part of this punishment, "Skathi [Skadi] took a poison-snake and fastened it up over Loki's face, and the poison dropped thereon."[16] Perhaps her rage against the trickster god emerged from the fact that he was intimately involved in the death of her father:

Loki spake:
I was first and last | at the deadly fight
There where Thjazi we caught.[17]

Retrieved from https://www.newworldencyclopedia.org/p/index.php?title=Skadi&oldid=990897
Categories:
Hidden category:
This page was last edited on 22 September 2015, at 16:33.
Content is available under Creative Commons Attribution/Share-Alike License; additional terms may apply. See Terms of Use for details.