Apricot is a fruit-bearing deciduous tree, Prunus armeniaca, classified with the plum in the subgenus Prunus of the Prunus genus. The term also refers to the edible fruit of this tree.

The flowers and fruit of the apricot, which are important for the plants reproduction, also provide larger values for the ecosystem and human beings. Ecologically, the flowers and fruits provide a food source for pollinating insects and animals that consume fruits. For humans, the apricot fruits—whether fresh, frozen, canned, or dried—provide a pleasing and nutritionous food source. The kernals of the apricot pits are used in flavoring liqueurs and producing oil. In addition to the taste, the texture and color of apricot fruits, and the beauty of the trees and flowers, add to the human enjoyment of nature.

The apricot is considered to be native to China and spread to Europe and the Caucasus (Loudon 1838); it has been grown in China for over 4,000 years (Herbst 2001). It now thrives in most temperate climates, including North, Central, and South America, North America, and Oceania. Prunus armeniaca or "Armenian plum" (also classified as Armeniaca vulgaris) has long been cultivated in Armenia, where it is known as Ծիրան in the Armenian language. (It is known as 杏子 in Chinese and Meruňka in Czech).

Prunus is a genus of plant in the family Rosaceae. Rosaceae is one of the largest families of flowering plants with about 3,400 species, including apples, berries, peaches, plums, cherries, the hawthorn tree, the mountain ash, and many others. The genus Prunus includes the plums, cherries, peaches, apricots, and almonds. There are around 430 species of Prunus spread throughout the northern temperate regions of the globe.

The Prunus subgenus, which includes the apricots and plums, is distinguished from other subgenera (peaches, cherries, bird cherries, etc.) in the shoots having a terminal bud and the side buds being solitary (not clustered), the flowers being grouped one to five together on short stems, and the fruit having a groove running down one side, and a smooth stone.

Prunus armeniaca is a small- to medium-sized tree with a dense, spreading canopy 8–12 meters tall. The apricot's leaves are alternate and shaped somewhat like a heart, with pointed tips; they are about eight centimeters long and 3–4 centimeters wide. Its flowers are white to pinkish in color.

The apricot fruit appears similar to a peach or nectarine, with a color ranging from a pale yellow to a deep burnt orange and sometimes a red cast; the flesh ranges from a golden cream color to a brilliant orange (Herbst 2001). The fruit's surface is smooth and nearly hairless. Apricots are stone fruit (drupes), so called because the lone seed is often called a "stone." While related to the peach, the apricot is smaller and has an oval, smooth pit that falls out easily when the fruit is cut in half (Herbst 2001).

The name apricot derives from "apricock" and "abrecox," through the French abricot, from the Spanish albaricoque, which was an adaptation of the Arabic al-burquk. This itself is a rendering of the late Greek πρεκοκκια or πραικοκιον, adapted from the Latin praecox or praecoquus (early), possibly referring to the fruit maturing much earlier in the summer than plums. However, in Argentina and Chile the word for "apricot" is "damasco" which probably indicates that to the Spanish settlers of Argentina the fruit was associated with Damascus in Syria.

The Turkish idiom "bundan iyisi Şam'da kayısı" (literally, the only thing better than this is apricot in Damascus) means "it doesn't get any better than this" and is used when something is the very best it can be; like a delicious apricot from Damascus.

The apricot fruit may be eaten fresh, or pitted and dried, frozen, or canned. They may be used in desserts, in juices, and for flavoring. The fresh fruit is highly perishable and seasonal (Herbst 2001).

The seeds or kernals of the apricot pits, which are poisonous until roasted, are used in confections and to flavor liqueurs (Herbst 2001). Seeds or kernels of the apricot grown in central Asia and around the Mediterranean are so sweet that they may be substituted for almonds. The Italian liqueur Amaretto and amaretti biscotti are flavored with extract of apricot kernels rather than almonds. Oil pressed from these cultivars has been used as cooking oil.

Cyanogenic glycosides (found in seeds, bark, and leaves of most stone fruits) are found in high concentration in apricot seeds (TC 2007). Laetrile, a purported alternative treatment for cancer, is extracted from apricot seeds. As early as the year 502, apricot seeds were used to treat tumors, and in the seventeenth century apricot oil was used in England against tumors and ulcers (TC 2007). However, in 1980 the National Cancer Institute in the United States claimed laetrile to be an ineffective cancer treatment (TC 207).

In Europe, apricots were long considered an aphrodisiac and were used in this context in William Shakespeare's A Midsummer Night's Dream, and as an inducer of childbirth labor, as depicted in John Webster's The Duchess of Malfi.

The Chinese associate the apricot with education and medicine. Chuang Tzu, a Chinese philosopher in fourth century B.C.E., had told a story that Confucius taught his students in a forum among the wood of apricot. In the second century, Tung Fung, a medical doctor, lived in Lushan. He asked his cured patients to plant apricots in his backyard instead of paying consultation and medical fees. Those cured of serious illness planted five, and the rest planted one. After some years, a hundred thousand apricot trees were planted and the wood become the symbol for doctors and medicine. 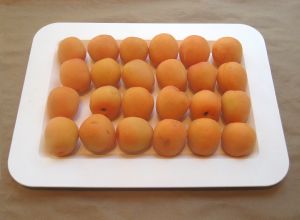 Fresh apricots on display for sale in a produce shop in Boston.

The apricot is thought to have originated in northeastern China near the Russian border. In Armenia, it was known from ancient times (6,000-year-old seeds have been discovered) and today is the main fruit culture grown in the republic (Morikian 1983). The Roman General Lucullus (106-57 B.C.E.) even exported some trees—cherry, white heart cherry, and apricot—from Armenia to Europe.

While English settlers brought the apricot to the English colonies in the New World, most of modern American production of apricots comes from the seedlings carried to the west coast by Spanish missionaries. Almost all U.S. production is in California (94%), with some in Washington and Utah (AGMRC 2006).

Turkey is one of the leading dried-apricot producers. Other top producers of apricots are as Iran, Italy, and Pakistan. In Armenia, apricots are grown in Ararat Valley.

Apricots also are cultivated in Egypt and are among the common fruits well known there. The season in which apricot is present in the market in Egypt is very short. There is even an Egyptian proverb that says "Fel meshmesh" (English: "in the apricot"), which is used to refer to something that will not happen because the apricot disappears from the market in Egypt so shortly after it has appeared. Egyptians usually dry apricot and sweeten it, then use it to make a drink called "amar el deen."

Although often thought of as a "subtropical" fruit, the apricot is in fact native to a region with cold winters. The tree is slightly more cold-hardy than the peach, tolerating winter temperatures as cold as −30°C or lower if healthy. The limiting factor in apricot culture is spring frosts: These trees tend to flower very early, around the time of the vernal equinox even in northern locations like the Great Lakes region, meaning spring frost often kills the flowers.

Apricot trees do need some winter cold (even if minimal) to bear and grow properly and do well in Mediterranean climate locations, since spring frosts are less severe here but there is some cool winter weather to allow a proper dormancy. The dry climate of these areas is best for good fruit production. Hybridization with the closely related Prunus sibirica (Siberian apricot; hardy to − 50 degrees Cwntigrade but with less palatable fruit) offers options for breeding more cold-tolerant plants (PFAF 2003). 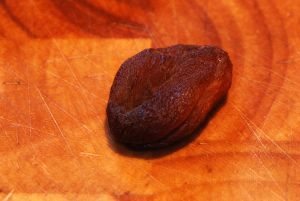 Dried organic apricot, produced in Turkey. The color is dark because it has not been treated with sulfur dioxide (E220).

Dried apricots typically are treated with sulfur dioxide to preserved their color (Herbst 2001).