Fowl is the common name for any of the gamefowl or landfowl comprising the bird order Galliformes, or any of the waterfowl comprising the order Anseriformes. Galliforms or gallinaceous birds include such as pheasants, turkeys, quail, and chickens. Anseriforms include such as ducks, geese, and swans. Based on anatomical and molecular similarities, these two orders are often, but not universally, placed together to comprise the fowl clade Galloanserae. However, the term fowl is not a formal taxonomic grouping and often is used less precisely, including being limited to the various birds in Galliformes or to any wild or domestic birds used as food or hunted as game.

Fowl offer important ecological, commercial, aesthetic, and culinary functions. Many birds that are eaten by humans are fowl, including poultry such as chickens or turkeys, game birds such as pheasants or partridges, wildfowl like guineafowl or peafowl, and waterfowl such as ducks or geese. Some, such as chickens and turkeys, are part of a large international trade, while some, such as ducks, turkeys, and pheasants, are sought after by hunters for sport. Peafowl, such as exemplified by the extravagant tail of the peacock, offer great aesthetic value, as do ducks, geese, and many other fowl. Ecologically, fowl are important components of terrestrial and aquatic food chains.

Most or all birds collectively referred to as fowl belong to one of two orders, namely the gamefowl or landfowl (Galliformes) and the waterfowl (Anseriformes). Galliformes contains more than 250 living species worldwide, including such familiar representatives as turkeys, grouse, chickens, quails, peafowl, and pheasants. They are characterized by stocky built, small head, strong feet, and often short bills and wings, and adult males typically have sharp horny spur on the back of each leg. Anseriformes contains about 150 living species of birds in three extant families: the Anhimidae (the screamers), Anseranatidae (the Magpie-goose), and the Anatidae, which includes over 140 species of waterfowl, among them the ducks, geese, and swans. All species in this order are highly adapted for an aquatic existence at the water surface and all are web-footed for efficient swimming (although some have subsequently become mainly terrestrial).

Interestingly, various studies of anatomical and molecular similarities suggest these two groups were close evolutionary relatives and together have been placed in the clade scientifically known as Galloanserae (initially termed Galloanseri) (Sibley et al. 1998). This clade is supported by morphological and DNA sequence data (Chubb 2004) as well as retrotransposon presence/absence data (Kriegs et al. 2007). Thus, many avian systamatists regard galliformes and anseriformes as sister taxa. However, Ericson et al. (2001) report that morphological and molecular evidence suggests that Galloanserae are not a monophyletic group and that the anseriform-gallifrom relationship is not supported.

While fowl commonly is used for members of Galliformes and Anseriformes, the term poultry typically is used for any kind of domesticated bird or bird that is captive-raised for meat or eggs. For example, ostriches are sometimes kept as poultry, but are neither gamefowl nor waterfowl. However, in colloquial speech, the term "fowl" often is used nearly interchangeably with "poultry" or even "bird," and many languages do not distinguish between "poultry" and "fowl." If Galliformes and Anseriformes are considered to form a monophyletic group then the distinction between "fowl" and "poultry" gains greater support. Sometimes the term poultry or fowl also is included in the term livestock; however, livestock generally refers to any domesticated mammal intentionally reared in an agricultural setting for the purposes of profit or subsistence, whether for food, fiber, dairy, draft, breeding, sport purposes, or other product or labor. As such, livestock typically includes animals such as cattle, horses, sheep, and fur-bearing animals, but does not include poulty—farmed birds such as turkeys, chickens, and geese. 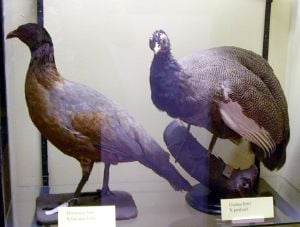 While they are extremely diverse ecologically, morphologically, and ethologically, there are still some features which unite water- and landfowl. Many of these, however, are plesiomorphic for Neornithes as a whole, and are also shared with paleognaths.

Fowl are considered to have been the first neognath lineages to evolve. From the limited fossils that have to date been recovered, the conclusion that they were already widespread—indeed the predominant group of modern birds—by end of the Cretaceous is generally accepted nowadays. Fossils such as Vegavis indicate that essentially modern waterfowl, albeit belonging to a currently extinct lineage, were contemporaries of the (non-avian) dinosaurs. As opposed to the morphologically fairly conservative Galliformes, the Anseriformes have adapted to filter-feeding and are characterized by a large number of autapomorphies related to this lifestyle. The extremely advanced feeding systems of the Anseriformes, together with similarities of the early anseriform Presbyornis to shorebirds, had formerly prompted some scientists to ally Anseriformes with Charadriiformes instead (Benson 1999; Feduccia 1999). However, as strong support for the Galloanserae has emerged in subsequent studies, the fowl clade continues to be accepted as a genuine evolutionary lineage by the vast majority of scientists.

Apart from the living members, the Gastornithiformes are probably a prehistoric member of the Galloanserae.

Retrieved from https://www.newworldencyclopedia.org/p/index.php?title=Fowl&oldid=1096886
Categories:
Hidden category:
This page was last edited on 22 January 2023, at 14:35.
Content is available under Creative Commons Attribution/Share-Alike License; additional terms may apply. See Terms of Use for details.