The Free Soil Party was a short-lived political party in the United States which was active in the 1848 and 1852 presidential elections, and in some state elections. It formed as a breakaway faction of the Democratic party and was later largely absorbed by the Republican party in 1854. Its main purpose was opposing the expansion of slavery into the territories, arguing that free men on free soil comprised a morally and economically superior system to slavery. The Free Soilers were against the expansion of slavery but not the idea of slavery, their goal was to gain the land to the west, and keep the land free of slaves.

Free Soil candidates ran on the platform declaring "...we inscribe on our banner, 'Free Soil, Free Speech, Free Labor and Free Man,' and under it we will fight on and fight ever, until a triumphant victory shall reward our exertions." 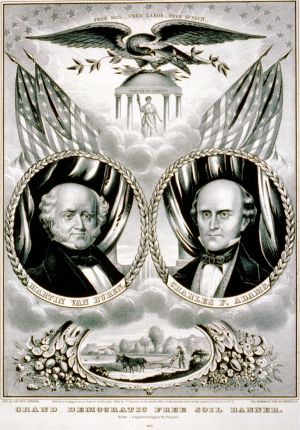 The party called for a homestead act, internal improvements, and a tariff for revenue only. The Free Soil Party attracted mainly abolitionists from the North and other free states. Their main support came from Yankee-settled areas of upstate New York, western Massachusetts and northern Ohio, though other states also had representatives.

In 1848, the first Free Soil Party convention was held in Buffalo, New York, where they nominated former Democratic President Martin Van Buren with Charles Francis Adams as vice president. The main party leaders were Salmon P. Chase of Ohio and John P. Hale of New Hampshire. They won no electoral votes. The nomination of Van Buren had the adverse effect of discouraging many anti-slavery Whig Party supporters from joining the Free Soil Party. 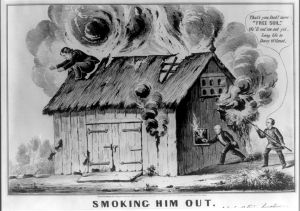 The Barnburners were the more radical faction of the New York Democratic Party in the mid-nineteenth century. The term barnburner was derived from the idea of someone who would burn down his own barn to get rid of a rat infestation—in this case, those who would destroy the Democratic Party over the issue of slavery.

The Barnburners opposed the extension of slavery, expanding public debt, and the power of the large corporations. They were led by former president Martin Van Buren and his son John, and in the 1848 presidential election they bolted from the party, refusing to support presidential nominee Lewis Cass and instead joining with other anti-slavery groups, predominantly the Abolitionist Liberty Party and some anti-slavery Whigs in New England and the upper Midwest to form the Free Soil Party. 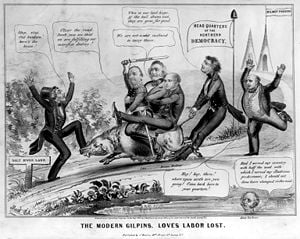 "The Modern Gilpins" - rivalry between the Hunkers and anti-slavery democrats

Their opponents, the conservative Hunkers, favored minimizing the slavery issue, internal improvements, and state banks. The term hunker was derived from someone who "hunkers" (hankers) after a political office. Following the 1848 election, the Hunkers themselves split over the question of reconciliation with the Barnburners, with the "Softs," led by William L. Marcy, favoring reconciliation, and the "Hards," led by Daniel S. Dickinson, opposing it.

While this division occurred within the context of New York politics, it reflected the national divisions in the United States in the years preceding the American Civil War.

The Free Soil Party was a notable third party. More successful than most, it had two senators and fourteen representatives sent to the thirty-first Congress. Their presidential nominee in 1848, Martin Van Buren, received 291,616 votes against Zachary Taylor of the Whigs and Lewis Cass of the Democrats, although he received no electoral votes. The party's "spoiler" effect in 1848 may have put Taylor into office in a narrowly-contested election.

The strength of the party, however, was its representation in Congress. The sixteen elected officials were able to have an influence despite being a small group. Its most important legacy was as a route for anti-slavery Democrats to join the new Republican coalition.