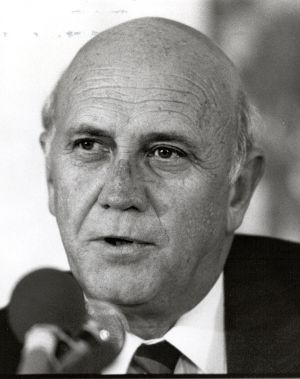 Frederik Willem de Klerk (March 18, 1936 – November 11, 2021) was the last State President of apartheid-era South Africa, serving from September 1989 to May 1994. De Klerk was also leader of the National Party (which later became the New National Party) from February 1989 to September 1997.

De Klerk is best known for engineering the end of apartheid, South Africa's racial segregation policy, and supporting the transformation of South Africa into a multi-racial democracy by entering into the negotiations that resulted in all citizens, including the country's black majority, having equal voting power and human rights. He shared the Nobel Peace Prize with Nelson Mandela in 1993, for his role in the ending of apartheid. Although his party had been the architect of apartheid, he decided to end the system peacefully instead of attempting, as those further to the political right advocated, either to continue to fight or dividing the country between black and white. By embracing a peaceful end to decades of oppression, de Klerk helped to create a climate in which a spirit of reconciliation and forgiveness instead of revenge and recrimination has characterized post-apartheid South Africa. Some may say that the writing for the racist system was on the wall and that it was prudent to negotiate a peaceful transfer of power. Yet to abandon policies his party had long espoused, and to do so in the face of fierce criticism from hard-line Afrikaaners was nonetheless an act of courage. Had he not taken this view when he did, apartheid could have struggled on, despite international opposition, and much more blood would certainly have been spilled.

De Klerk was the Deputy President of South Africa during the presidency of Nelson Mandela until 1996. In 1997, he retired from politics and thereafter lectured internationally until his death in 2011.

Born in Johannesburg to parents Jan de Klerk and Corrie Coetzer, de Klerk came from a family environment in which the conservatism of traditional white South African politics was deeply ingrained. His great-grandfather was a senator, his grandfather stood twice for the white parliament unsuccessfully, and his aunt was married to National Party Prime Minister J. G. Strydom. In 1948, the year when the NP swept to power in whites-only elections on an apartheid ticket, F. W. de Klerk's father, Johannes "Jan" de Klerk, became secretary of the NP in the Transvaal province and later rose to the positions of cabinet minister and President of the Senate. His brother Willem is a liberal newspaperman and one of the founders of the Democratic Party. After completing high school in Krugersdorp, de Klerk graduated, in 1958, from the Potchefstroom University with BA and LL.B degrees (the latter cum laude). Following graduation, de Klerk practiced law in Vereeniging in the Transvaal. In 1969, he married Marike Willemse, with whom he had two sons and a daughter.[1]

"F. W.," as he became popularly known, was first elected to the South African Parliament in 1969, as the member for Vereeniging, and entered the cabinet in 1978. De Klerk had been offered a professorship of administrative law at Potchefstroom in 1972, but he declined the post because he was serving in Parliament. In 1978, he was appointed Minister of Posts and Telecommunications and Social Welfare and Pensions by Prime Minister Vorster. Under Prime Minister P. W. Botha, he held a succession of ministerial posts, including Posts and Telecommunications and Sports and Recreation (1978-1979), Mines, Energy and Environmental Planning (1979-1980), Mineral and Energy Affairs (1980-82), Internal Affairs (1982-1985), and National Education and Planning (1984-89). He became Transvaal provincial National Party leader in 1982. In 1985, he became chairman of the Minister's Council in the House of Assembly. On December 1, 1986, he became the leader of the House of Assembly.

As Minister of National Education, F.W. de Klerk was a supporter of segregated universities, and as a leader of the National Party in Transvaal, he was not known to advocate reform. However, after a long political career and with a very conservative reputation, in 1989, he placed himself at the head of verligte ("enlightened") forces within the governing party, with the result that he was elected head of the National Party in February 1989, and finally State President in September 1989, to replace then-president P. W. Botha when the latter was forced to step down after a stroke.

In his first speech after assuming the party leadership, he called for a non-racist South Africa and for negotiations about the country's future. He lifted the ban on the ANC and released Nelson Mandela. He brought apartheid to an end and opened the way for the drafting of a new constitution for the country based on the principle of one person, one vote. Nevertheless, he was accused by a close friend of Mandela, Anthony Sampson, of complicity in the violence between the ANC, the Inkatha Freedom Party and elements of the security forces. In Mandela: The Authorized Biography, Sampson accuses de Klerk of permitting his ministers to build their own criminal empires.

Did you know?
F.W. de Klerk shared the Nobel Peace Prize with Nelson Mandela in 1993, for ending apartheid in South Africa

His presidency was dominated by the negotiation process, mainly between his NP government and Mandela's ANC, which led to the democratization of South Africa.

In 1990, De Klerk gave orders to roll back South Africa's nuclear weapons program, and the process of nuclear disarmament was essentially complete in 1991. The existence of the program was not officially acknowledged before 1993.[2]

De Klerk shared the Nobel Peace Prize with Nelson Mandela in 1993, for his role in the ending of apartheid.

After the first free elections in South African general election, 1994, de Klerk became Deputy President in the government of national unity under Nelson Mandela, a post he kept until 1996. In 1997, he also gave over the leadership of the National Party and retreated from politics.

In 1998, de Klerk and his wife of 38 years, Marike, were divorced following the discovery of his affair with Elita Georgiades, then the wife of Tony Georgiades, a Greek shipping tycoon who had allegedly given de Klerk and the NP financial support.[3] Soon after his divorce, de Klerk and Georgiades were married and, during their honeymoon, he addressed the Literary and Historical Society in University College Dublin. His divorce and re-marriage scandalized conservative South African opinion, especially among the Calvinist Afrikaners. Then, in 2001, the country was shocked by the violent death of his ex-wife.[3]

In 1999, his autobiography, The Last Trek—A New Beginning, was published.

In 2004, de Klerk announced that he was quitting the New National Party and seeking a new political home after it was announced that the NNP would merge with the ruling ANC. That same year, while giving an interview to U.S. journalist Richard Stengel, de Klerk was asked whether South Africa had turned out the way he envisioned it back in 1990. His response was:

There are a number of imperfections in the new South Africa where I would have hoped that things would be better, but on balance I think we have basically achieved what we set out to achieve. And if I were to draw balance sheets on where South Africa stands now, I would say that the positive outweighs the negative by far. There is a tendency by commentators across the world to focus on the few negatives which are quite negative, like how are we are handling AIDS, like our role vis-à-vis Zimbabwe. But the positives—the stability in South Africa, the adherence to well-balanced economic policies, fighting inflation, doing all the right things in order to lay the basis and the foundation for sustained economic growth—are in place.[4]

In 2006, he underwent surgery for a malignant tumor in his colon. His condition deteriorated sharply, and he underwent a second operation after developing respiratory problems. He recovered and on September 11, 2006, gave a speech at Kent State University's Stark Campus in North Canton, Ohio. In 2006, he also underwent triple coronary artery bypass surgery.[5]

In January 2007, de Klerk was a speaker promoting peace and democracy in the world at the "Towards a Global Forum on New Democracies" event in Taipei, Taiwan, along with other dignitaries including Poland's Lech Walesa.

De Klerk served as the chairman of the pro-peace F. W. de Klerk Foundation. He was an Honorary Patron of the University Philosophical Society and Honorary Chairman of the Prague Society for International Cooperation. He also sat on the Advisory Board of the Global Panel Foundation.

The peaceful transition of power in an atmosphere of reconciliation and forgiveness, in large measure generated by the personal generosity of spirit of Nelson Mandela, is the legacy that de Klerk left his nation. The far right Arfrikaaners regard him as a traitor. The right-wing Freedom Front supports a separate Volkstaat for Afrikaaners, probably along the Orange River. However, South Africa is being transformed into a truly multi-racial state, or the rainbow nation, under its present leadership.