Not to be confused with Cavalry (horse or armored troops). 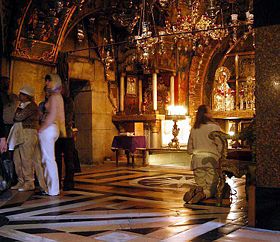 Calvary (originally known as "Golgotha" meaning: "place of the skull") is the English-language name given to the hill on which Jesus was crucified. The word “Calvary” comes into the English Bible only from the King James Version (Luke 23:33). The hill is described as being outside Jerusalem, but its actual location is still debated. The Roman Empire typically crucified criminals along roadways so that they would be widely seen by the population to deter criminal behavior. The crucifixion hill by Jerusalem was known in Latin as Calvariae Locus, in Greek as Κρανιου Τοπος (Kraniou Topos) and Gûlgaltâ in Aramaic. While all of these terms mean "place of [the] skull," it is not clear whether they refer to a hill containing a pile of skulls, or to a geographic feature resembling a skull.

The New Testament describes Calvary as being located close to Jerusalem (John 19:20), and outside of its walls (Hebrews 13:12). This is in accordance with Jewish tradition, since Jesus was also buried near to the place of his execution. Calvary is mentioned in all four accounts of Jesus' crucifixion in the Christian canonical Gospels:

And they came to a place called Golgotha, which is called the Place of the Skull. (Matthew 27:33)

And they took him up to the place Golgotha, which is translated Place of the Skull. (Mark 15:22)

And carrying his cross by himself, he went out to the so-called Place of the Skull, which is called in 'Hebrew' Golgotha. (John 19:17)

Luke's Gospel does not give the local, Aramaic name, Golgotha. John's Gospel somewhat misleadingly labels the name as 'Hebrew', indicating the 'language of the Hebrews', which was Aramaic at that time.

According to Christian legend, the Tomb of Jesus and the True Cross were discovered by the Empress Helena, mother of Constantine in 325 C.E. The Roman Emperor Constantine the Great built the Church of the Holy Sepulchre in 326-335 C.E. on what was thought to be near the location of Calvary. Today, the Church of the Holy Sepulchre is now within Jerusalem's Old City walls, but it was beyond them at the time in question. The Jerusalem city walls were expanded by Herod Agrippa in 41-44 C.E. and only then enclosed the site of the Church of the Holy Sepulchre. Professor Sir Henry Chadwick (Dean Emeritus of Christ Church Oxford University) comments: "Hadrian's builders replanned the old city, incidentally confirming the bringing of the hill of Golgotha inside a new town wall (a fact implicit in a Good Friday sermon "On the Pascha" by Melito bishop of Sardis about 30 years later). On this site, already venerated by Christians, Hadrian erected a shrine to Aphrodite. [1] Writing in 333 C.E., the Pilgrim of Bordeaux stated, "There, at present, by the command of the Emperor Constantine, has been built a basilica, that is to say, a church of wondrous beauty. On the left hand is the "little" hill of Golgotha where the Lord was crucified. About a stone's throw from thence is a vault (crypta) wherein his body was laid, and rose again on the third day."[2]See also [3] Other descriptions of Calvary can be found in the writings of Eusebius (338), Bishop Cyrillus (347), pilgrim Egeria (383), Bishop Eucherius of Lyon (440), and Breviarius de Hierosolyma (530).

Church of the Holy Sepulchre

Inside the Church of the Holy Sepulchre is a pile of rock about five meters high, believed to be what now remains visible of Calvary. During restoration works and excavations inside the Church from the years 1973-1978, it was discovered that the hill was originally a quarry for white "Meleke limestone." This little hill could possibly have looked like a skull from the city of Jerusalem. In 1986, a ring was found of 11.5 cm diameter, struck into the stone, which could have held a wood trunk of up to 2.5 meters in height. The church is accepted as the Tomb of Jesus by most historians and the little rock nowadays inside the present church as the location of Calvary. 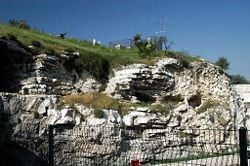 After time spent in Palestine in 1882-1883, Charles George Gordon suggested a different location for Calvary since it was not then known that the location of the Church of the Holy Sepulchre was actually outside of the city walls at the time of the crucifixion. The Garden Tomb is to the north of the Holy Sepulchre, located outside of the modern Damascus Gate, in a place of burial certainly in the Byzantine period. The Garden has an earthen cliff that contains two large sunken holes that people say to be the eyes of the skull. This might be linked to an ancient Christian tradition according to which the skull of Adam is buried at Golgotha. [4]

Other uses of the word Calvary

The name Calvary often refers to sculptures or pictures representing the scene of the crucifixion of Jesus, or a small wayside shrine incorporating such an image. It also can be used to describe larger, more monumental constructions, essentially artificial hills often built by devotees.

Churches in various Christian denominations have been named Calvary. The name is also given to some cemeteries, especially those associated with the Roman Catholic Church.

Two Catholic religious orders have been dedicated to Mount Calvary.