A retrovirus is a type of RNA virus that contains the enzyme reverse transcriptase, which allows its genetic information to be integrated into the host DNA. Retroviruses have a genome consisting of two RNA molecules, which may or may not be identical, from which they code for DNA. The genome of the retrovirus is then inserted into the DNA of a host cell with the help of an integrase enzyme.

The process of transcribing RNA to DNA, which is accomplished by reverse transcriptase, is referred to as reverse transcription and it renders retro-viruses their name. Classically, according to a central dogma of molecular biology, transcription was thought to only occur from DNA to RNA, and then into proteins.

The finding of the same endogenous retroviral sequences in the same positions on chromosomes of two different species offers support for the idea that evolution involved common ancestors and descent with modification, emphasizing a fundamental harmony among all organisms. Such retroviral sequences are evidences of a past viral infection of germ cells, which is then passed on to descendants.

Retroviruses form by budding off of the cell membrane of host cells. They have an outer layering and are consequently described as enveloped viruses. A common retrovirus is the Human Immunodeficiency Virus, commonly known as HIV and formerly known as HTLV-III. Human T-lymphotropic virus (HTLV), of which there are several species, is a human, single-stranded RNA retrovirus that causes T-cell leukemia and T-cell lymphoma in adults.

A virus (Latin, poison) is a submicroscopic particle that can infect the cells of a biological organism. A virus stores its nucleic acid genome and serves as a means of delivery of that genome into cells it targets to serve as obligate parasites and constitutes an infection. The genome of an organism is defined as the hereditary information of that organism, which is encoded in the DNA or RNA and which serves as the template for translation of genes into proteins. An obligate parasite is an organism that cannot live independently of its host. 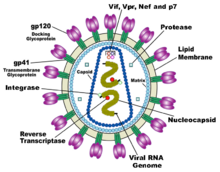 Diagram of HIV, a retrovirus, with viral envelope and surface proteins

Retroviruses are enveloped viruses, meaning they have an outer layering derived from the membrane of its host cell. This outer lipid layer is studded with proteins coded for by the viral genome and host genome, although the lipid membrane itself is host-coded. It offers protection from harmful agents and the proteins may include glycoproteins that help healthy cells to recognize the invaders as "friendly," helping their uptake. Characteristics of the outer envelope have a major effect on what types of cells the virus can attack. Antibodies, which are created to prevent and fight viruses, are produced against the envelope and are found in vaccines. Retroviruses have a diameter of approximately 100 nanometers.

Retrovirus genomes commonly contain these three genes, among others, that encode for proteins that can be found in the mature virus:

Several genera of retroviruses exist, as listed below.

These were previously divided into three subfamilies (Oncovirinae, Lentivirinae, and Spumavirinae), but with our current knowledge of retroviruses, this is no longer appropriate.

While transcription was classically thought to only occur from DNA to RNA, reverse transcriptase transcribes RNA into DNA. Reverse transcriptase activity outside of retroviruses has been found in almost all eukaryotes, enabling the generation and insertion of new copies of retrotransposons (mobile genetic elements) into the host genome.

Because reverse transcription lacks the usual proofreading of DNA transcription, this kind of virus mutates very often. This enables the virus to grow resistant to antiviral pharmaceuticals quickly, and impedes, for example, the development of an effective vaccine against HIV.

Thus far, four human retroviruses—HTLV 1 and 2, in conjunction with HIV 1 and 2—have been found to attack helper T cells, which "help" the immune response.

Endogenous retroviruses inserted into a host genome offer molecular remnants of a past viral infection. When inserted in the germ line, it is inherited by descendants. As this process is considered to be rare and random, finding the same endogenous retroviral sequence in identical positions on chromosomes of two different species is taken by researchers as evidence of common descent. For example, such common molecular sequences are found between chimpanzees and humans, suggesting an ancestor common to both family trees— that is, ancestors of both chimps and humans had such a sequence in their genome prior to the splitting into these two species. (In general, chimpanzee and human DNA shows great similarity, with greater than 98 percent identity between genomes in terms of various measurements—chromosomal correspondence, nucleotide matches, protein sequences, etc. Most studies show slightly over one percent difference.)

Studies of retroviruses led to the first demonstrated synthesis of DNA from RNA templates, a fundamental mode for transferring genetic material that occurs in both eukaryotes and prokaryotes. It has been speculated that the RNA to DNA transcription processes used by retroviruses may have first caused DNA to be used as genetic material. In this model, cellular organisms adopted the more chemically stable DNA when retroviruses evolved to create DNA from the RNA templates.