Cell church refers to a church structure based on the regular gathering of small groups. Rather than focus on a large Sunday service, cell churches focus on developing close relationships between members by meeting regularly in houses or smaller meeting places. A meeting may consist of a number of elements including reading of scripture, discussion, sharing, prayer, and worship.

Cells provide spiritual nourishment for members and encourage church growth by inviting guests. As with cells in the human body, when a cell grows beyond a normal size, the cell multiplies into two cells, and the cycle continues.

The Essence of a Cell Church

Any viable community, including cell churches, is bound together by love, support, loyalty of members, and a shared sense that it fulfills an essential need in the life of its members. Traditional families normally provide these elements of community stemming from the natural biological dependence of children on their parents and the sense of love and responsibility parents feel towards their children. The cell church is like a family unit except its membership is voluntary rather than biological. It must provide essential community and spiritual nourishment or it will dissolve.

The name cell church comes from the Christian Church in China that developed during the time of Mao Tse Tung. The communists in China used a cell structure to underpin the social order. Small groups of citizens, comprising a few families or a small village, would organize for decision-making. These groups would be staffed by one or two party members who would ensure community decisions were in line with government policy. The Christian Church was forbidden in Communist China, so Christians organized in small groups that met privately, and these groups became known as cell churches.

In reality, many of the first Christian churches in the days of Saint Paul may have been small communities more like cell churches than the traditional churches of today, and small spiritual communities have existed in many times and in many religions under other names. However, the rapid expansion of Christianity in China despite official persecution inspired ministers of other churches to develop cell churches as spiritual support for members and local community outreach. 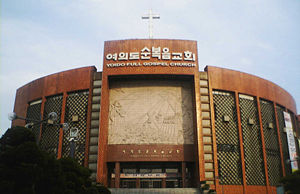 The first modern cell church was developed in South Korea by Dr. Yonggi (David) Cho, whose Full Gospel Revival Center in SeoDaeMun had grown to 7,750 members in 1967, when the cell system was introduced to help the spiritual development of members and expand the church. In 1973, with membership at over 10,000 the church reorganized as Yoido Full Gospel Church (YFGC). There were 100,000 members by 1979 and, in 1981, when there were 200,000 members, satellite churches were established throughout Korea. In 2005, there were 800,000 members.

In 1973, the 10th Pentecostal World Conference was held at YFGC, and 5,000 visitors from around the world marveled at the accomplishments of the church. In September of 1992, Pastor Cho Yonggi was elected as the chairman of the Executive Committee of the World Pentecostal Assemblies of God Fellowship now known as the World Assemblies of God Fellowship, which had a membership of 30,000,000 members among 60 nations of the world. He was the first leader outside America to head this large religious denomination.

In the United States, pilgrims returning from YFGC began to emulate Dr. Cho's pattern [1]. Results were varied. Some experienced success; others saw the development of in-grown cliques or challenges to authority and were shut down. One of the first successful models was developed at New Hope Community Church by Pastor Dale Galloway in Portland, Oregon. In 1990, a new wave of cell group experiments in every denomination resulted from the publication of Where Do We Go From Here? by Dr. Ralph W. Neighbor who was involved in highly successful cell group ministries in Houston, Texas, and in Singapore. While particularly successful in urban areas and in modern megachurches, cell churches are being promoted everywhere.

Communities of three to fifteen people are a size in which people can experience close personal interaction, share with one another, support one another, and develop open and honest communication. Traditional natural communities are rooted in the extended family, and among neighbors in sparsely inhabited areas. Large population shifts to urban areas lead to a breakdown of these traditional communal bonds because individuals migrating to cities for work find themselves alone and without traditional community support. A cell group in an urban area can therefore become a substitute for natural community.

In many parts of the world, cell churches have developed where public worship is highly controlled or forbidden. Christianity in Maoist China is an example of where the number of Christians spread in the country even while churches were officially forbidden and repressed. Underground churches also flourished in Eastern Europe under communism.

Official state churches are often a source of religious intolerance as well. Monopoly on religious doctrine is frequently used in collusion with government officials in an effort to perpetuate a status quo. In some cases only the official religion is allowed to hold public worship services. In other cases the state funds the official churches and enacts laws that make it very difficult for other religions to operate. This is the case in much of Europe.

In Latin America in the 1970s, base communities, a form of a cell church, were organized among the poorest groups of people by priests desiring to lift people out of dire poverty. The liberation theology used by some of these base communities was frequently condemned by political regimes in Latin America. Cardinal Joseph Ratzinger, the theological guardian of the Roman Catholic faith (he became Pope Benedict XVI in 2005), condemned liberation theology as heretical.

When traditional churches fail to provide community and spiritual resources to members, they will seek alternative sources. In areas where several cell churches are active, the members may hold a Sunday service as an extension of the cells, thereby creating a new traditional-type church.

Traditional churches that have experienced tremendous growth due to the success of their ministry become too large to provide a community experience. Such churches include those which broadcast services over wide areas like Robert Schuler's Crystal Cathedral, or the Yoido Full Gospel Church. People want to remain members of these churches because they identify with the mission or the minister, yet they need the community found in traditional churches or the cell churches. Cell churches form a necessary and integral part of the overall structure of a successful megachurch.

Megachurches that work on a traditional worship pattern with one or more weekly services, including the Sunday morning service, operate cell churches as an extension of these worship activities. These cell church meetings are primarily Bible study meetings with discussion and sharing, but can work as a group-focused evangelism program, or other activities based on a common interest.

Cell churches are small communities of members which can either be democratic or led by a lay member. An elder or member of a pastoral team supervises groups of several, perhaps five, cell churches. A pastor will serve several subgroups, perhaps 25 cell churches.

There are a number of structures used to organize multiple cells within a church. Each megachurch develops the structure that best fits its ministry. For example, the G-12 Structure is one of the ways cell churches care for cell leaders. It consists of a leadership cell ideally consisting of 12 people who each facilitate their own cell, traditionally a group of four to seven people.

In societies where religion is suppressed, cells are often isolated for reasons of security and develop in independent and varied ways because of that isolation.

The Future of Cell Churches

As urbanization continues to increase around the world, larger churches will form in densely populated areas around successful and charismatic ministers. Mass society creates social conditions that will promote an increasing number of megachurches via satellite and the Internet. These large churches will require cell churches to provide community and personal guidance for individual members. As a result an increase in cell churches is expected.

Retrieved from https://www.newworldencyclopedia.org/p/index.php?title=Cell_Church&oldid=1002846
Categories:
Hidden category:
This page was last edited on 20 January 2017, at 21:21.
Content is available under Creative Commons Attribution/Share-Alike License; additional terms may apply. See Terms of Use for details.