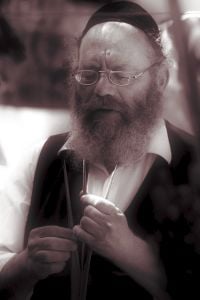 Generation after generation of rabbis study the gemara.

The Gemara (also Gemorah) ('גמרא' - from gamar: Hebrew (to complete); Aramaic (to study) is the part of the Talmud that contains rabbinical commentaries and analysis of its predecessor, the Mishnah, which was finalized by Rabbi Judah the Prince (c. 200 C.E.) and studied exhaustively by generation after generation of rabbis in Babylonia and the Land of Israel. Their discussions were written down in the series of books that became the Gemara, which when combined with the Mishnah completes the Talmud.

There are two recensions of the Gemara, one compiled by the scholars of the Land of Israel (primarily in the academies of Tiberias and Caesarea) and completed c. 350-400 C.E., and the other by those of Babylonia (primarily in the academies of Sura, Pumbedita, and Mata Mehasia), completed c. 500 C.E. In general, the terms "Gemara" or "Talmud," without further qualification, refer to the Babylonian recension.

The "Gemara" shows an emphasis on analysis and reasoning in order to clarify scripture that ranks among the highest examples of discursive reasoning about God found in the world's religions.

The Gemara and the Mishnah together make up the Talmud. The Talmud thus comprises two components: the Mishnah - the core text; and the gemara - analysis and commentary, which “completes” the Talmud (from gamar גמר,: Hebrew "[to] complete"; Aramaic "[to] study"); see Structure of the Talmud.

The analysis of the Amoraim is generally focused on clarifying the positions, words and views of the Tannaim. These debates and exchanges form the "building-blocks" of the gemara; the name for a passage of gemara is a sugya (סוגיא; plural sugyot). A sugya will typically comprise a detailed proof-based elaboration of the Mishna. Every aspect of the Mishnaic text is treated as a subject of close investigation. This analysis is aimed at an exhaustive understanding of the Mishna's full meaning.

In the Talmud, a sugya is presented as a series of responsive hypotheses and questions—with the Talmudic text as a record of each step in the process of reasoning and derivation. The Gemara thus takes the form of a dialectical exchange. (By contrast, the Mishnah states concluded legal opinions—and often differences in opinion between the Tannaim. There is little dialogue.) The disputants here are termed the makshan (questioner, "one who raises a difficulty") and tartzan (answerer, "one who puts straight").

The gemara records the semantic disagreements between Tannaim and Amoraim. Some of these debates were actually conducted by the Amoraim, though many of them are hypothetically reconstructed by the Talmud's redactors. (Often imputing a view to an earlier authority as to how he may have answered a question: "This is what Rabbi X could have argued…") Rarely are debates formally closed.

The distinctive character of the gemara derives largely from the intricate use of argumentation and debate, described above. In each sugya, either participant may cite scriptural, Mishnaic and Amoraic proof to build a logical support for their respective opinions. The process of deduction required to derive a conclusion from a prooftext is often logically complex and indirect. "Confronted with a statement on any subject, the Talmudic student will proceed to raise a series of questions before he satisfies himself of having understood its full meaning." [1]

Prooftexts quoted to corroborate or disprove the respective opinions and theories will include:

The actual debate will usually center on the following categories:

Why does the Mishna use one word rather than another? If a statement is not clear enough then the Gemara seeks to clarify the Mishna's intention.

Exploring the logical principles underlying the Mishnah's statements, and showing how different understandings of the Mishnah's reasons could lead to differences in their practical application. What underlying principle is entailed in a statement of fact or in a specific instance brought as an illustration? If a statement appears obvious, the Gemara seeks the logical reason for its necessity. It seeks to answer under which circumstances a statement is true, and what qualifications are permissible. All statements are examined for internal consistency.

Resolving contradictions, perceived or actual, between different statements in the Mishnah, or between the Mishnah and other traditions; e.g., by stating that: two conflicting sources are dealing with differing circumstances; or that they represent the views of different rabbis. Do certain authorities differ or not? If they do, why do they differ? If a principle is presented as a generalization, the gemara clarifies how much is included; if an exception, how much is excluded.

Demonstrating how the Mishnah's rulings or disputes, derive from interpretations of Biblical texts. From where in the Torah does the Mishnah derive a particular law?

Retrieved from https://www.newworldencyclopedia.org/p/index.php?title=Gemara&oldid=1083506
Categories:
Hidden category:
This page was last edited on 23 October 2022, at 19:16.
Content is available under Creative Commons Attribution/Share-Alike License; additional terms may apply. See Terms of Use for details.