Book of Thomas the Contender

The Apostle Thomas, known here as "The Contender"

The Book of Thomas the Contender, also known more simply as the Book of Thomas (not to be confused with the Gospel of Thomas), is one of the works of the New Testament Apocrypha discovered in the Nag Hammadi library, a cache of mostly gnostic literature buried in the Egyptian desert until the mid twentieth century. The title derives from the book's first line, "The secret words that the savior spoke to Judas Thomas," combined with a line appended to the end of the text which identifies the author as "the Contender writing to the Perfect."

The Book of Thomas the Contender may have originally been two separate works, one a dialogue, the other a monologue or letter. Its content is clearly gnostic in the sense of conveying secret knowledge from Jesus by which humans can be perfected through spiritual enlightenment, rather than through sacraments or belief in the atoning power of Jesus' death on the Cross. It is also strongly ascetic in character, especially on the question of sexual relations, which it condemns as procreating bodies that are no better than those of animals.

It is difficult to judge how well known or widely read Thomas the Contender may have been. However, scholars believe that it forms part of a wider body of "Thomas" literature that played an important role in the formation of early Christianity.

There are two competing theories as to the composition of the text. The first emphasizes the fact that the actual dialog between Thomas and Jesus lasts only for about three fifths of the text, with the remainder being a monologue by Jesus. The current book may thus have originally been two works, one of dialog, one of monologue or letter. The second theory holds that the work originated as a letter, an Epistle of the Contender, written by a non-Christian Jew who upheld a semi-gnostic Hellenic philosophy. In this theory, the text was later given a Christian setting and converted for the most part into a dialog. An additional consideration is that, since the scribe writing the text is named Matthaias, this work may be the same as the lost Gospel of Matthias referred to in the writings of the Church Fathers, several of whom associate it with gnostic heresy.

The Book of Thomas the Contender was probably composed in the early third century C.E. It appears to be part of the gnostic or proto-gnostic tradition exemplified in the Gospel of Thomas (50-125 C.E.), and the Acts of Thomas, (c. 225 C.E.). 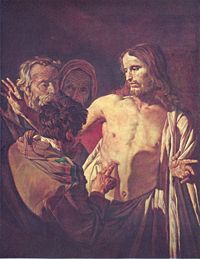 "Doubting Thomas" receives dramatic evidence of Jesus' physical resurrection, a doctrine which plays no part in the Book of Thomas the Contender.

The "Thomas" tradition in early Christianity portrays Judas Thomas as the recipient of special knowledge from Jesus. The tradition speaks of Jesus primarily as a teacher of mystical insight, rather than the Son of God sent to save mankind from sin by dying on the Cross. The physical resurrection of Jesus plays no part in this theology, for the physical body is seen only as the prison of the spirit. Some scholars, such as Elaine Pagels (2003), suggest that the story of "Doubting Thomas"—who refused to believe that Christ had risen until he received proof by touching the resurrected savior's physical wounds—may have been added into the orthodox Gospel tradition to denigrate the "Thomas Christians" who denied the necessity of Jesus' physical resurrection.

The content of Thomas the Contender is gnostic in character, in the sense of Jesus imparting a secret knowledge which emphasizes spiritual enlightenment and the denial of the physical body. It lacks specific references to the elaborate gnostic cosmology of Valentinian Gnosticism, but the outline of such a cosmology may be inferred by the book's emphasis on concepts such as truth versus illusion, resisting the pleasures of the flesh, the body as a prison for the spirit, the heavenly pleroma ("fullness"), and spiritual perfection associated with a secret doctrine which most hearers cannot understood.

A prominent theme in this work is the need to forgo sexual relations between men and women, which it sees as based on the passion for fleshly pleasure, leading to the procreation of physical bodies which are no better than those of beasts. The book is thus related to the doctrine of encratisim, which forbade marriage and followed a vegetarian diet. However, it is not possible to draw a direct connection between the book and the known encratist movements referred to by the Church Fathers. The Book of Thomas the Contender has also been seen as containing elements of Manicheanism, especially in its dualism and asceticism.

In a more modern interpretation, the dialog can also be read as an internal conversation between Jesus and his "lower self," Judas Thomas, sometimes called "the Twin," who is cast as the "contender" for supremacy of the soul. In this view, the New Testament's "Doubting Thomas" and Judas, "the betrayer," could also be descriptive of an internal battle between the Christ Self and "ego identity." 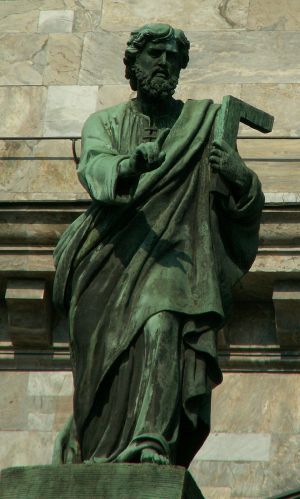 The book opens by identifying its writer as Mathaias, who transcribed the following dialog between Jesus and Thomas. Jesus acknowledges Thomas' reputation as his "twin and true companion" and encourages him to learn his true identity, which cannot be known as long as he remains in ignorance. Jesus identifies himself as "the knowledge (Greek: gnosis) of the truth," and predicts that in the future, Thomas will be called "the one who knows himself."

Thomas implores Jesus to teach him of "the hidden things," so that he can speak of them to his fellow humans after the savior's ascension. Jesus explains that our "visible bodies" survive by devouring other living creatures, and thus become subject to change and decay. "That body is bestial," he explains, originating from sexual intercourse like any lower animal. He therefore instructs his disciples to be "like babes" until they reach perfection.

"Why does this visible light (the sun) that shines on behalf of men rise and set?" Thomas asks. The savior replies that the sun is merely part of a transitory existence, and that "when all the elect abandon bestiality," even the sun will "withdraw up to its essence." The time of the end is close at hand: "Only a little while longer, and that which is visible will dissolve."

He goes on to denounce the "fire" of passion, which makes the minds of both males and females drunk and deranges their souls, "for the males move upon the females and the females upon the males." Jesus advises that truth seekers "make themselves wings" to fly from such lusts.

This, Jesus explains, is "the doctrine of the perfect." Only the foolish are guided by the "fire," which provides the illusion of truth, but in the end imprisons them in "a dark sweetness" and blinds them with "insatiable lust." On the other hand, he declares: "Blessed is the wise man who sought after the truth, and when he found it, he rested upon it forever and was unafraid of those who wanted to disturb him."

Thomas asks how he and the other disciples should deal with those who defend physical life and procreation, since without these things humans cannot know salvation. Jesus gives a harsh reply to this query: "Do not esteem them as men, but regard them as beasts, for just as beasts devour one another, so also men of this sort devour one another."

"How can we go preach to them," Thomas protests, "since we are not esteemed in the world?" Jesus predicts that those who do listen will be persecuted by the rulers of this world, who in turn are under the dominion of powerful evil angels.

At this point Jesus alone speaks for the rest of the book. He begins with a series of curses:

These woes are followed in turn by a series of blessings on those who do receive the truth:

The book closes with an encouragement to avoid association with the flesh and to free oneself from the prison of the body: "For when you come forth from the sufferings and passions of the body, you will receive rest from the Good One, and you will reign with the king, you joined with him and he with you, from now on, for ever and ever."

Retrieved from https://www.newworldencyclopedia.org/p/index.php?title=Book_of_Thomas_the_Contender&oldid=997005
Categories:
Hidden category:
This page was last edited on 17 June 2016, at 15:57.
Content is available under Creative Commons Attribution/Share-Alike License; additional terms may apply. See Terms of Use for details.