Jehoiakim ("he whom Jehovah has set up," Hebrew: יהוֹיָקִים) was one of the last kings of Judah. The son of King Josiah, Jehoiakim succeeded his younger brother Jehoahaz on the throne of Judah as a result of Jehoahaz's being deposed by Pharaoh Necho II of Egypt. Originally named Eliakim, he became king at the age of 25 and reigned between 609 and 598 B.C.E. His name is also sometimes spelled Jehoikim or Joachim.

During Jehoiakim's reign as a vassal of Egypt, Nebuchadnezzar II invaded Judah and forced Jehoiakim to shift his allegiance to Babylon. Jehoiakim was bitterly opposed by the prophet Jeremiah for his apparently liberal religious policy and his misplaced hope in Egypt. As a result, Jehoiakim burned a manuscript of Jeremiah's prophecies, ordered his arrest, and executed one of the prophet's colleagues.

Jehoiakim eventually refused to continue paying tribute to Nebuchadrezzar II, which resulted in the subsequent siege of Jerusalem of 597 B.C.E., just prior to which Jehoiakim died, probably of natural causes. He was succeeded by his son Jehoiachin, who soon surrendered to the Babylonians, resulting in the deportation of many of Jerusalem's nobles, craftsmen, and other leading citizens.

Jehoiakim lived at a time of great crisis for the Kingdom of Judah. His father, Josiah, was considered to be Judah's greatest king since David by the biblical writers, but had been shockingly killed in battle against Pharaoh Necho II at Megiddo.

Josiah's religious reforms, in which he violently suppressed all non-Jewish religions and banned even sacrifices to Yahweh outside of Jerusalem, had been greeted with tremendous enthusiasm by the Temple priesthood, who saw him as a new Joshua. After Josiah's death, Judah found itself sandwiched between two colliding great civilizations: Egypt and Babylonia, with Egypt temporarily winning the tug-of-war over the middle ground of the southern Levant.

Jehoiakim was the eldest son of King Josiah but it was his younger brother Jehoahaz (Shallum) who took the throne after Josiah's death. Pharaoh Necho quickly deposed Jehoahaz and placed Jehoiakim on the throne, changing his name, which was originally "Eliakim," in the process (II Kings 23:4). Jehoahaz, meanwhile, was taken captive and brought to Egypt. In addition to taking unspecified treasures from the Temple of Jerusalem, the pharaoh imposed heavy tribute on Jehoiakim, forcing him to raise taxes in order to obtain the necessary funds.

The chronology of events in Jehoiakim's reign is difficult to reconstruct, since it relies not only on the accounts in the books of Kings and Chronicles, but also from the prophecies of Jeremiah, which are not recorded in chronological order.

"Early" in Jehoiakim's reign, Jeremiah urged the king to return to the strict religious policy adopted by Josiah, saying in God's name:

"If you do not listen to me and follow my law, which I have set before you, and if you do not listen to the words of my servants the prophets, whom I have sent to you again and again (though you have not listened), then I will make this house [the Temple of Jerusalem] like Shiloh and this city an object of cursing among all the nations of the earth." (Jeremiah 26:4-6)

This threat was greeted with a great outcry from those who believed that God would never remove his protection from the Temple—including priests, citizens, and even other prophets. Jeremiah's opponents immediately went to Jehoiakim's officials and demanded Jeremiah's death on grounds of treason. Jeremiah defended himself by assuring the officials that if his words of advice would be heeded, both the Temple and city would be safe, and the cooler heads in this crisis eventually prevailed.

Another critic of Jehoiakim, however, was not so fortunate. When Uriah son of Shemaiah prophesied in a similar vein, the king himself sought his death. Although Uriah fled into Egypt, he was soon retrieved and executed.

Meanwhile, Nebuchadnezzar II of Babylon, against whom Pharaoh Necho had marched when Josiah had attempted to intercept him a few years earlier, was not willing to accept Egyptian suzerainty over the kingdoms of the Levant. In Jehoiakim's fourth year as king, Nebuchadnezzar therefore invaded Judah and compelled Jehoiakim to pay tribute to him instead of Egypt. Some in Judah, notably the prophet Jeremiah, preferred Nebuchadnezzar to Necho, who had killed Josiah and shattered the hope that he would institute a golden age not seen since the times of David and Solomon. Jeremiah became Jehoiakim's most outspoken opponent and urged a policy of cooperation with Babylon.

However, after three years as a vassal to Babylon, Jehoiakim rebelled, a decision which ultimately brought ruin upon himself and upon the country. Jeremiah, meanwhile, became increasingly bold in his criticism against the king. Although banned from speaking openly in the Temple area, Jeremiah dictated a series of stinging prophecies to his scribe, Baruch, and ordered him to read them publicly on his behalf: 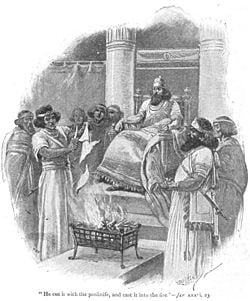 Jehoiakim destroys the writings of Jeremiah

"The king of Babylon will certainly come and destroy this land and cut off both men and animals from it. Therefore, this is what the Lord says about Jehoiakim king of Judah: 'He will have no one to sit on the throne of David; his body will be thrown out and exposed to the heat by day and the frost by night. I will punish him and his children and his attendants for their wickedness; I will bring on them and those living in Jerusalem and the people of Judah every disaster I pronounced against them, because they have not listened.'" (Jeremiah 36:29-31)

When these words reached the king's ears, Jehoiakim cut the scroll on which they were written in pieces and burned them. He then ordered the arrest of both the prophet and his scribe, but Jeremiah and Baruch, safely hidden, only redoubled their efforts. The prophet went even so far as to predict that Jehoiakim would be buried "with the burial of an ass, drawn, and cast forth beyond the gates of Jerusalem." (Jer. 22:19) However, this prophecy went apparently unfulfilled, as the Book of Kings reports only that "he rested with his fathers." (2 Kings 24:6)

In the later years of his reign, Jehoaikim held out against a series of raids by Babylonian, Syrian, Moabite, and Ammonite forces, with the Babylonians playing a coordinating role. Finally, Nebuchadnezzer organized a major invasion force and prepared to lay siege to Jerusalem. Jehoiakim died, apparently of natural causes, after a reign of 11 years, with the Babylonian army either approaching or already at his gates.

He was succeeded by his 18-year-old son Jehoiachin, who resisted the siege for three months before surrendering.

According to rabbinical tradition, Jehoiakim was passed over to become King Josiah's successor because he was deemed unworthy (Seder 'Olam R. xxiv.; Hor. 11b). When, subsequently, Jehoiakim took the government, he showed how little he resembled his pious father. Although the biblical record does not specify his evil deeds, he was, in fact, a godless tyrant, committing the most atrocious sins and crimes.

Some traditions hold that he lived in incestuous relations with his mother, daughter-in-law, and stepmother, and was in the habit of murdering men and then raping their wives. He was so intent on pleasing his Egyptian overlords, that he wore garments forbidden to Jews, tattooed his body, and underwent an operation to reverse his circumcision (Lev. R. xix. 6; Midr. Aggadat Bereshit xlviii.; Sanh. 103b). He even boasted of his greed and idolatry, saying, "All that God gives us is light, and... we have a kind of gold (of idolatry) that shines just like the light. Furthermore, God has given this gold to mankind and is not able to take it back again." (Sanh. l.c.) 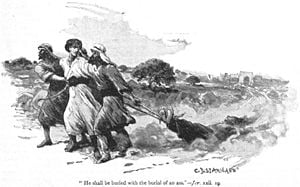 Jehoiakim's body being dragged through the dirt

When Nebuchadnezzar marched with his army toward Judah, the Great Sanhedrin came to pay him their respects; and Nebuchadnezzar demanded that Jehoiakim be delivered to him, in which case he would not disturb the city and its inhabitants. When informed of this, Jehoiakim selfishly refused to sacrifice himself for the good of his nation (Lev. R. xix. 6).

Various opinions have been handed down concerning the circumstances of Jehoiakim's death, due to the difficulty of harmonizing the conflicting biblical statements on this point. According to some, he died in Jerusalem before the Sanhedrin could comply with the demand made by Nebuchadnezzar, who therefore had to be content with the king's body, which was cast to him over the walls. Another version says that he died while being let down over the wall. Still others maintain Nebuchadnezzar killed him and then threw his corpse piecemeal to the dogs, or put it into the skin of a dead ass (Lev. R. xix. 6; Seder'Olam R. xxv).

Notwithstanding his many sins, Jehoiakim is not one of the kings who have no part in the future world (Sanh. 103b). Because his son Jehoiachin later repented of his own sins and lived a pious life in exile, Jeremiah's curse on Jehoiakim's descendants was rescinded by God, and he is thus to become one of the ancestors of the Messiah.

Jehoiakim's son Jehoiachin continued his father's policy of resistance against Babylon for three months. This, put him, like his father, squarely at odds with the prophet Jeremiah, who denounced the young king in the severest possible terms. After the young king was taken in chains to Babylon, Jehoiakim's brother Zedekiah became Judah's king in Jerusalem. At first he collaborated with the Babylonians, but pressure from priests, prophets, and other citizens caused him eventually to reject Jeremiah's advice. His rebellion against Nebuchadnezzar II brought about the destruction of both Jerusalem and its Temple around 586 B.C.E., signaling the demise of the Kingdom of Judah.

Retrieved from https://www.newworldencyclopedia.org/p/index.php?title=Jehoiakim&oldid=1016946
Categories:
Hidden category:
This page was last edited on 7 January 2019, at 21:48.
Content is available under Creative Commons Attribution/Share-Alike License; additional terms may apply. See Terms of Use for details.