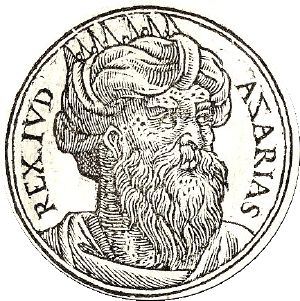 Uzziah of Judah (Hebrew: עֻזִּיָּהוּ‎), also known as Azariah, was the king of the ancient Kingdom of Judah. William F. Albright has dated his reign to 783 B.C.E.-742 B.C.E., while E. R. Thiele offers the dates 767 B.C.E.-740 B.C.E. His dates are uncertain due to the fact that some analysts believe he ruled in place of his exiled father Amaziah for several years before reigning in his own name.

An effective organizer and military leader, Uzziah conquered the Philistines to the west and solidified Judah's suzerainty over the Ammonites and Arab tribes to the east. One of Judah's most effective rulers, the biblical writers indicate that "his fame spread as far as the border of Egypt, because he had become very powerful" (2 Chron. 26:8).

Although he was for many years on good terms with the priests of Jerusalem, at some point Uzziah deeply offended them by entering the Temple of Jerusalem and burning incense there, an act normally reserved to the priests. Thereafter, he was deemed unclean on grounds of leprosy and had to live apart from others, his son Jotham ruling in his place.

Uzziah is one of the kings mentioned in the genealogy of Jesus in the Gospel of Matthew, as well as one of the ancestors of the Messiah to come in Jewish tradition.

Uzziah came to the throne in the midst of palace intrigues over religious and political policy. His grandfather, Joash, had been placed on the throne as a young boy by the high priest Jehoiada, who had engineered the assassination of the Queen Athaliah for the toleration of Baal worship. Joash, too, had later been murdered. Uzziah's father Amaziah faced opposition from Judah's prophetic party, which forced him to break his alliance with the northern Kingdom of Israel. Although Amaziah was able to subdue the land of Edom, he was again condemned by the prophets when, as Edom's lord, he honored the Edomite deities. Hard feelings between Israel and Judah led to Amaziah making war against the north, leading to a disastrous defeat in which Jerusalem was sacked. He died years later at Lachish as a result of a conspiracy which placed his son, Uzziah on the throne in Jerusalem.

Uzziah took the throne at the age of sixteen (2 Kings 14:21). The biblical writers give him a fairly strong endorsement, stating that: "He did what was right in the eyes of the Lord." However, he did not entirely agree with the policy of the Jerusalem priests. Thus, "the high places, were not removed; the people continued to offer sacrifices and burn incense there."

Uzziah was contemporary with the prophets Isaiah, Hosea, and Amos, although they do not prophecy directly concerning him in their works. Amos, however, mentions an earthquake that took place during Uzziah's reign, and this disaster was strong enough that it is mentioned again later by the prophet Zechariah as a warning for future generations.

Amos also prophesied against the peoples whom Uzziah would soon defeat, saying:

"For three sins of Gaza, even for four, I will not turn back my wrath.
Because she took captive whole communities and sold them to Edom,
I will send fire upon the walls of Gaza that will consume her fortresses.
I will destroy the king [e] of Ashdod and the one who holds the scepter in Ashkelon.
I will turn my hand against Ekron, till the last of the Philistines is dead," says the Sovereign Lord…

For three sins of Ammon, even for four, I will not turn back.
Because he ripped open the pregnant women of Gilead in order to extend his borders,
I will set fire to the walls of Rabbah that will consume her fortresses
amid war cries on the day of battle, amid violent winds on a stormy day.
Her king [g] will go into exile, he and his officials together,"

The Book of Chronicles relates that Uzziah indeed conquered the Philistines by breaking down the walls of Gath, Jabneh, and Ashdod. He also defeated certain Arabian tribes who may have lived in the territory of Edom and exacted tribute from the Ammonites (2 Chron. 26).

The Chronicler goes on to detail how Uzziah refortified his country, engaged in agricultural pursuits, and organized and equipped his army with the latest military technology.

Uzziah built towers in Jerusalem at the Corner Gate, at the Valley Gate and at the angle of the wall, and he fortified them. He also built towers in the desert and dug many cisterns, because he had much livestock in the foothills and in the plain. He had people working his fields and vineyards in the hills and in the fertile lands, for he loved the soil. Uzziah had a well-trained army, ready to go out by divisions… an army of 307,500 men trained for war, a powerful force to support the king against his enemies. Uzziah provided shields, spears, helmets, coats of armor, bows and slingstones for the entire army. In Jerusalem he made machines designed by skillful men for use on the towers and on the corner defenses to shoot arrows and hurl large stones (2 Chron. 26:9-15).

His success as king, administrator, and commander-in-chief of the army reportedly made Uzziah ruler over the largest realm of Judah since the days of Solomon. The good will which Uzziah had engendered with the priests of Jerusalem, however, came to an end when he entered the Temple of Yahweh and burned incense there, and act which the priests normally reserved to themselves. Some 80 priests followed him into the Temple and confronted him, their spokesman declaring:

It is not right for you, Uzziah, to burn incense to the Lord. That is for the priests, the descendants of Aaron, who have been consecrated to burn incense. Leave the sanctuary, for you have been unfaithful; and you will not be honored by the Lord God. 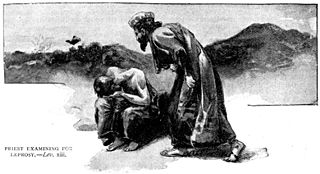 A priest inspects a man for skin disease.

While the author of the Books of Kings knows only that Uzziah had a skin disease throughout his life, the Chronicler dramatically reports that Uzziah was immediately stricken with leprosy for his disobedience. He was subsequently forced to dwell in a leper house until the day of his death (II Chron. 26:21). While he was in this condition Jotham, his son, ruled in his stead.

The prophet Isaiah reported that he had a dramatic vision in which he saw the Lord "in the year that king Uzziah died" (Isaiah 6:1). Uzziah was buried in a separate grave "in the field of the burial which belonged to the kings" (2 Kings 15:7; 2 Chr. 26:23).

Whether Uzziah was truly struck with leprosy upon inappropriately attempting to burn incense in the Temple is a matter of controversy. Since the (earlier) Book of Kings knows nothing of this event, one theory holds that the priests of Jerusalem used the occasion of Uzziah's attempt to usurp their role as a basis for declaring his previously-existing skin condition a grounds for banishment. It may be noted that the Temple priests had been extremely active in Judean politics previous to this, placing Joash on the throne after orchestrating the assassination of Athaliah, and probably being involved in subsequent palace intrigues involving both Amaziah, who incurred the opposition of prophets and priests for honoring the Edomite gods and was later assassinated, and Uzziah himself, who was brought to the throne as Amaziah's heir at 16. In any case, the glowing account of Uzziah's kingship suddenly ends after he offends the priests, and he disappears into obscurity.

Both 2 Chronicles (26:21, 27:1) and 2 Kings 15:33 state Jotham became king at the age of 25. However, after careful study of the sources, scholars have concluded that Jotham actually became steward at 25, and that he reigned as sole king for another 16 years after that.

The bad blood that had led Judah and Israel to war against each other during the time of Uzziah's father flared up again during Jotham's reign as he battled against King Pekah of Israel, and also against Rezin, king of the Arameans (2 Kings 15:37). The account of 2 Chronicles adds he was able to retain the control which his father had achieved over the Ammonites, which resulted in the their paying Judah tribute of 100 talents of silver and large amounts of wheat and barley (2 Chronicles 27:5).

As one of the Davidic kings, Uzziah is thought to be the ancestor of the future Messiah of Judaism. He is also listed in the genealogy of Jesus in the Gospel of Matthew.

In 1931, an archeological find, now known as the Uzziah Tablet, was discovered by Professor E.L. Sukenik of the Hebrew University of Jerusalem. He came across the artifact in a Russian convent collection from the Mount of Olives. The origin of the tablet previous to this remains unknown and was not documented by the convent. The inscription on the tablet is written in ancient Hebrew with an Aramaic style. This style is dated to around 30-70 C.E., around 700 years after the death of Uzziah. However, the inscription reads: "The bones of Uzziah, king of Judah, rest here… do not open." Some believe the inscription is related to a reburial of Uzziah after the Second Temple Period.

Retrieved from https://www.newworldencyclopedia.org/p/index.php?title=Uzziah_of_Judah&oldid=1087235
Categories:
Hidden category:
This page was last edited on 13 November 2022, at 22:57.
Content is available under Creative Commons Attribution/Share-Alike License; additional terms may apply. See Terms of Use for details.