Zedekiah (Hebrew: צִדְקִיָּהוּ, Tzidkiyahu; Greek: ζεδεκιας, Zedekias) was the last king of Judah. He was a son of King Josiah and the younger brother of kings Jehoahaz and Jehoiakim, but did not become king until after his nephew Jehoiachin had succeeded to the throne before him. In Hebrew, his name means "YHWH (my) righteousness." William F. Albright, archaeologist, and noted biblical scholar, dates his reign from 597 B.C.E. to 587 B.C.E.

Zedekiah became king after his immediate predecessors unsuccessfully rebelled against Babylon. This resulted in the first phase of the Babylonian exile of the Jews. His original name was Mattaniah, but when Nebuchadnezzar II placed him on the throne as the successor to Jehoiachin, his name was changed to Zedekiah.

The prophet Jeremiah urged Zedekiah to not resist the Babylonians, but he eventually listened to the words of other prophets and advisers. He, thus, provoked a second siege of Jerusalem by Nebuchadnezzar, resulting in his own capture, the death of his sons, and the destruction of his kingdom. His demise sealed the doom of the nation of Judah and marked the second phase of the Babylonian exile of the Jews.

A crisis had faced the Kingdom of Judah as a result of the end of the reign of King Josiah in the late seventh century C.E. Josiah is characterized by the Bible as the greatest king since David, yet he was killed in battle against Pharaoh Necho II at the battle of Megiddo. The biblical writers would later blame his demise on the sins of his predecessor, King Manasseh, which were seen as so great that God had already determined to send the Jews into exile.

Josiah had been killed in an effort to confront Egyptian forces who aimed to defeat the armies of the rising Babylonian Empire, and his demise placed Judah under Egyptian control. Jehoahaz, the second son of Josiah, reigned for only three months, after which he was dethroned by Necho II and exiled to Egypt. Josiah's eldest son, known by the throne name of Jehoiakim, replaced him, ruling at Necho's pleasure. However, when Nebuchadrezzar II of Babylon defeated Egypt at Carchemish in 604, Jehoiakim became the vassal of Babylon.

Jehoiakim eventually rebelled against Nebuchadrezzar and died in 598 B.C.E. during the first Babylonian siege of Jerusalem. His son Jehoiachin succeeded him. The prophet Jeremiah, who counseled a policy of non-resistance toward Babylon, had been a bitter opponent of his father, and strongly denounced Jehoiachin as well.

Nebuchadnezzar II's forces soon captured Jerusalem, removing Jehoiachin from office and taking him in chains to Babylon. Most of the royal household and those officials of Judah who had supported the rebellion against Babylon were forced into exile, along with many other leading citizens. The prophet Jeremiah, who had urged cooperation with the Babylonians, was allowed to remain, and Zedekiah—Jehoiachin's uncle—was identified as a suitable replacement as king under Babylonian supervision. 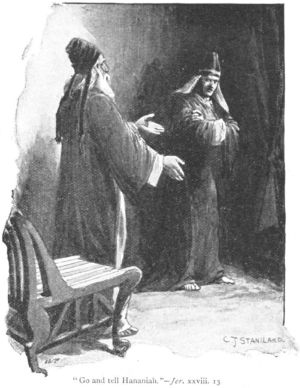 Jeremiah predicts the doom of his fellow prophet Hananiah

Zedekiah was only three years older than Jehoiachin, ascending the throne at the age of 21. Nebuchadnezzer required an oath of fealty from him, which he made in the name of Israel's God (2 Chronicles 36:13). Zedekiah was initially cooperative, lifting the restrictions the previous administration had imposed against the prophet Jeremiah, who was seen as a Babylonian sympathizer.

However, in Zedekiah's fourth year as king, talk of independence from Babylonian vassalage began to circulate once again. In opposition to this, Jeremiah dramatically appeared in the marketplace with a wooden yoke around his neck urging a policy of continued submission. The Temple-affiliated prophet Hananiah, however, prophesied against Jeremiah:

This is what the Lord Almighty, the God of Israel, says: "I will break the yoke of the king of Babylon. Within two years I will bring back to this place all the articles of the Lord's house that Nebuchadnezzar king of Babylon removed from here and took to Babylon" (28:2-3).

Hananiah then grabbed the yoke from Jeremiah's shoulders and broke it. Jeremiah withdrew to consider, and later countered with a prophecy of his own predicting Hananiah's doom within the same two-year period. Jeremiah had come to view Nebuchadnezzar as God's "servant" (Jer. 25:9), who had the mission of executing divine judgment on Judah because of her sins. He, thus, urged a policy of non-resistance to the Babylonians and even wrote those who had been taken into exile instructing them to pray for the Babylonian king and settle permanently into life there (Jer. 29).

As the son of the great King Josiah, the man the Bible calls Judah's greatest king since David, Zedekiah was understandably swayed by the patriotic call of Hananiah and others urging him to throw off the Babylonian yoke. He thus decided to support the rebellion against Nebuchadnezzar, entering into an alliance with Pharaoh Hophra, king of Egypt. This act, however, brought Nebuchadnezzar, "with all his host" (2 Kings 25:1), to conduct a new siege of Jerusalem.

Jeremiah confronted Zedekiah directly, warning that resistance against Babylon constituted rebellion against God and would bring disaster. The distant voice of the prophet Ezekiel, already in Babylonian exile, was added to this warning, but in the current political climate—with other prophets claiming exactly the opposite of what Jeremiah and Ezekiel said—the independence-minded king refused to listen. When the Babylonians temporarily lifted their siege to deal with Zedekiah's Egyptian allies, Jeremiah left Jerusalem on business in the nearby land of Benjamin and was arrested on the pretext of being a deserter. Beaten by palace guards, he was placed in a dungeon, but was soon released at Zedekiah's command, remaining confined within the palace court. The prophet, however, stubbornly refused to keep silence, predicting Jerusalem's imminent doom and affecting the morale of the soldiers, leading the king's officers to silence him by imprisoning him in an empty cistern, where he nearly died until he was rescued by an Egyptian eunuch.

During the siege, which began 589 B.C.E. and lasted about 18 months, "every worst woe befell the devoted city, which drank the cup of God's fury to the dregs" (2 Kings 25:3; Lamentations 4:4-9). In the eleventh year of Zedekiah's reign, Nebuchadnezzar succeeded in conquering Jerusalem. The city was plundered and reduced to ruins. Zedekiah and his followers attempted to escape, making their way out of the city, but were captured on the plains of Jericho, and were taken to Riblah. There, after seeing his sons put to death, Zedekiah's own eyes were put out. Placed in chains, he was carried captive to Babylon, where he remained a prisoner to the day of his death.

After the fall of Jerusalem, the Babylonian general Nebuzaraddan was sent to carry out its complete destruction. The city was razed to the ground, and the Temple of Jerusalem, the crucial center of Judah's religious life, was utterly destroyed.

Did you know?
Zedekiah was the Kingdom of Judah's last king

After the destruction of Jerusalem, the Babylonians established a new capital of Judea in Mizpah, appointing the pro-Babylonian administrator Gedaliah as governor. Jeremiah remained captive in the Jerusalem palace prison until his liberation by the Babylonians, who honored him as a man of God and allowed him to choose his place of residence. He chose to move to the new capital in Mizpah. Gedaliah, however, identified as a Babyonian collaborator was assassinated soon afterward. His successor, Johanan, rejected Jeremiah's counsels and fled to Egypt, supposedly taking the prophet with him.

As for Zedekiah himself, when his sons were killed by the Babylonians, he left no heir. It was to be through another branch of his father Josiah's lineage that the Davidic line continued, in whom the Jewish hope of the coming Messiah, "son of David," would be kept alive. The direct result of Zedekiah's rebellion against Babylon was that Jerusalem was taken, plundered, and burned. Its leading population was deported to Babylon as captives, and the Jewish kingdom perished. His demise, and that of the Kingdom of Judah, marked the beginning of the second phase of the Baylonian exile of the Jews.