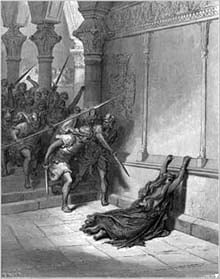 The death of Queen Athaliah

Athaliah (Hebrew: ʻAṯalyā (עֲתַלְיָה), "God is exalted") was the only ruling queen of Judah. She was the daughter of King Ahab and Queen Jezebel of Israel, and the wife of King Jehoram of Judah.

In her youth, Athaliah had been married to Jehoram to seal a treaty between the two sometimes warring nations of Judah and Israel. After Jehoram's death, their son Ahaziah became Judah's king. However, during a state visit to Israel, Ahaziah was murdered by the Yawhist usurper Jehu, along with Athaliah's mother Jezebel, her brother King Joram of Israel, and many other royal family members. Athaliah countered this by staging a bloody coup in Jerusalem, placing herself on the throne and attempting to eliminate any possible royal heir.

She reigned for about six years, continuing her husband's policy of allowing the worship of both Baal and Yahweh. The high priest Jehoiada, meanwhile, had hidden and nurtured Athaliah's young grandson Jehoash. When the time was ripe, Jehoiada overthrew and executed Athaliah, and placed Jehoash on the throne in her place.

William F. Albright has dated Athaliah's reign to 842 B.C.E. – 837 B.C.E., while E. R. Thiele offers the dates 841 B.C.E. – 835 B.C.E. In the biblical tradition, she is second only to her mother Jezebel as a woman of evil. However, recent scholarship in the feminist tradition views her as a victim of male chauvinism and a promoter of religious tolerance, who was no more ruthless as a ruler than her "good" male counterparts.

Athaliah was the daughter of the northern king Ahab and his Phoenician wife Jezebel. Her mother was known to be an ardent worshiper of "Baal," probably Baal Melqart of Tyre. Ahab worshiped the Israelite deity Yahweh but earned the disapproval of the prophets for his toleration and support of Jezebel's Baal worship. Athaliah's own name, however, means "Yahweh is exalted."

Israel and Judah had been at war in earlier generations, but during the time of King Jehoshaphat of Judah, the two nations formed a strong alliance. This resulted in Ahab contracting a marriage between Athaliah and Jehoshaphat's son Jehoram.

After Jehoshaphat's death, Athaliah rose to the position of queen consort as Jehoram became Judah's king. Meanwhile, Athaliah's brother, also called Jehoram (Joram), had become king of Israel following Ahab's death. Athaliah probably had several children with her husband Jehoram, who was 32 when he became king and reigned for eight years. The Book of Kings criticizes his marriage to the "daughter of Ahab" and indicates that he lost control of his Edomite vassals, while Chronicles adds that his kingdom suffered from successful attacks by Philistines and Arabs. In terms of his religious policy, Jehoram "did evil in the eyes of the Lord," (2 Kings 8:18) a reference to his toleration of Baal worship. This policy, no doubt, was at least in part due to Athaliah's influence. 2 Chronicles 21:12-16 preserves the text of a supposed letter from the northern prophet Elijah condemning Jehoram for his religious policy. It also states that "the Philistines and of the Arabs who lived near the Cushites" invaded his kingdom and captured his sons and wives: "Not a son was left to him except Ahaziah, the youngest." Athaliah apparently avoided capture during the raid, and Jehoram's other sons, some of whom we may assume to be Athaliah's children too, were slain (2 Chron. 22:1).

After Jehoram's death, their son Ahaziah became Judah's king at the age of 22. He formed a military alliance with Joram of Israel against the threat of the Syrian empire, a policy which troubled the biblical writers. Indeed, the prophet Elisha supported Syria's future King Hazael's usurpation of the throne, believing that Hazael would punish Israel for its sins. Elisha also engineered one of history's bloodiest coups against Joram of Israel, centering on the ardent Yahwist military commander Jehu.

At this very time, the unfortunate Ahaziah was visiting Joram, who had been wounded in battle against the common Syrian foe. Ahaziah was assassinated along with Joram at Jehu's orders. Thus Athaliah lost both her brother and her son, both of them kings. Her mother, Jezebel, soon also died at Jehu's hands, as did many others members of her extended family, both northerners and southerners.

Learning of these things, Athaliah was not content to let the Yahwist faction in Jerusalem follow Jehu's example. She ordered the assassination of any member of the royal family with a claim to the southern kingship and seized the throne herself. However, Ahaziah's "sister" Jehosheba—who may have been either Athaliah's daughter or the child of a rival wife—succeeded in getting control of the young Jehoash (Joash), the son of Ahaziah. She placed him in hiding under the protection of of her husband, the high priest Jehoiada, at the Temple of Jerusalem.[1]

Athaliah reigned for six years as the only ruling queen of either Judah or Israel. The Bible says little of Athaliah's reign, but it is clear that she followed her husband Jehoram's policy of tolerating both the worship of Yahweh and of Baal. A temple of Baal existed in Jerusalem during her time, but it is not clear whether it was built before her reign or during it. In terms of foreign relations, we can presume that the alliance between Judah and Israel came to an end, and that this was a contributing factor in Israel's subjection to Syria during Jehu's reign, as well as Judah's own later vassalage to Damascus. 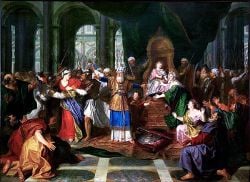 Athaliah cries "Treason!" as Joash is proclaimed king. She is expelled from the Temple and put to death.

In Athaliah's seventh year the stalwart high priest Jehoiada mustered his allies and brought the seven-year-old Joash from his hiding place. Athaliah, being apprised of the attempt to usurp her throne rushed into the Temple, apparently unattended by her guard. As soon as she saw the newly crowned king, she rent her clothes in despair, and cried defiantly, "Treason! Treason!"

Jehoiada ordered that she be taken forth through the ranks, and he also pronounced a death sentence upon any who should espouse her cause. "So they made way for her, and she went to the entry of the horse gate by the king's house: and they slew her there." (2 Kings 11:4-20)

Jehoiada immediately engineered an attack on the Jerusalem's Temple of Baal. A crowd of Yahwist zealots smashed its altars, destroyed its icons and artifacts, and murdered the priest Mattan in front of the altar.

The young king then took his place on the royal throne, although it is certain that the de facto ruler of Judah was now Jehoiada.

Daughter of Ahab, or his sister?

Although most classical rabbinic commentators have regarded Athaliah as the daughter of Jezebel and Ahab, some scholars have argued that she was in fact the daughter of Omri, Ahab's father, and thus Ahab's sister.[2]

The Scriptures that appear to support the brother-sister relationship are the following:

The support for Athaliah being Ahab's daughter comes from two verses, 2 Kings 8:18 and its parallel in 2 Chronicles 21:6. These verses say that Jehoram of Judah did wickedly "because he married a daughter of Ahab." This would seem to settle the question in favor of the daughter relationship, with one precaution: the Syriac version of the 2 Chronicles 21:6 says "sister of Ahab" instead of daughter. This textual support for Athaliah being the sister of Ahab is usually regarded as weak enough to justify translating bath in 2 Kings 8:26 and 2 Chronicles 22:2 as "granddaughter," thus bringing the various passages about Athaliah into harmony: she is presented as Omri's granddaughter and Ahab's daughter.

Athaliah was the only woman ever to have reigned over either Judah or Israel. In the aftermath of the murder of her son Ahaziah, her mother Jezebel, and all of her northern relatives, she fought fire with fire, acting more like a man than women by trying to rid her own kingdom of any possible rivals. She did not completely succeed in this, however. Moreover, her support of Baal worship proved her undoing, as the priests of the rival Temple of Yahweh controlled her grandson and plotted her death. Whatever positive accomplishments she may have achieved during her reign as queen are written out of the biblical record.

Athaliah's grandson, the boy-king Jehoash, remained under the sway of the priests for several years. However, he eventually grew suspicious that the Temple officials had been abusing public money by failing to make needed improvements to the building. Also, by the time he was 30, the lack of cooperation between his kingdom and the northern kingdom of Israel had left both nations vulnerable to Syrian power. Syria's king Hazael, having already made Israel his vassal, succeeded in pressuring Jerusalem militarily, forcing Jehoash to buy him off at a dear price, sending him "all the sacred objects dedicated by his fathers—Jehoshaphat, Jehoram and Ahaziah, the kings of Judah—and the gifts he himself had dedicated and all the gold found in the treasuries of the temple of the Lord and of the royal palace."

Possibly in response to this failure, "his officials conspired against him and assassinated him at Beth Millo, on the road down to Silla." His own son succeeded him and remained more steadfast to the will of the priests.

Although the rest of the house of Ahab had been wiped out by Jehu, Athaliah's royal Davidic lineage survived until the Babylonian exile and beyond. In Christian tradition, though it is rarely mentioned, she is one of the ancestors of Jesus Christ. However, in the biblical tradition she is surpassed only by her mother Jezebel as a woman of evil.

French tragedian Jean Racine wrote a 1691 play about this Biblical queen, entitled Athalie. George Frideric Handel composed a 1733 oratorio based on her life, called Athalia, calling her a "Baalite Queen of Judah Daughter of Jezebel."