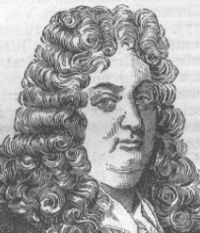 Jean Racine (December 22, 1639 – April 21, 1699) was a French poet dramatist, and one of the most important figures in seventeenth-century French literature along with Jean-Baptiste Molière and Pierre Corneille. Racine was the pre-eminent tragedian of his day—many consider him to be the father of French tragedy, just as Molière is considered the father of French comedy—and he was also the most accomplished practitioner of French classicism.

Like many other playwrights of the era, Racine consciously modeled his works after the Greek and Latin classics of the ancient world, particularly the works of the classic Greek tragedians Aeschylus, Sophocles, and Euripides. Drawing his plots primarily from these authors and Greek mythology, Racine reinvigorated the classics with an entirely new style that focused on the consciousness of his characters almost to the exclusion of typical action. Although it would be an anachronism to call Racine a "psychological" playwright when he lived hundreds of years before the birth of modern psychology, he nevertheless brought new life and new dimensions to the characters of the classical stage, bringing into view—perhaps for the first time in the Western canon—the importance of interior conflict.

In addition to his gifts as a sheer dramatist, Racine is also acclaimed for his mastery of the French language, and in particular for his command of the standard verse-form of seventeenth-century French drama, the Alexandrine line. Moreso than any other author living in France, Racine helped to re-energize the classicist movement in literature, leading to the continued development of classicism well into the eighteenth century. Racine's unique and nuanced sense of character has drawn acclaim from playwrights, novelists, and poets alike, and he has been cited as a major influence from such varied artists as Henrik Ibsen, Henry James, Marcel Proust, and Samuel Beckett. Although his works in recent times have fallen somewhat out of vogue, Racine remains one of the most important figures in the history of early French literature, as well as one of the most important playwrights in the development of European drama.

Born in La Ferté-Milon, in the province of Aisne, Racine's mother died shortly after he was born, and his father died by the time he was two years of age. Taken in by his grandmother, the young Racine was enrolled in the convent school at Port-Royal des Champs, near the outskirts of Paris, at the age of nine. Racine's grandmother was a devout member of the Catholic reform movement known as Jansenism, (which, during Racine's lifetime was condemned as heretical) and Port-Royal des Champs had been founded by a number of Jansenist clergy in order to educate a new generation of Jansenist thinkers and religious scholars. As a result of these unusual circumstances, Racine received an extremely good education in Latin and Greek at a time when most children of his means would have had no access to the classical languages.

Racine's family, and his mentors at Port-Royal, had hoped he would undertake the study of theology. Racine, however, begged to study law, and with the permission of his teachers he was allowed to enroll in the College of Harcourt, in the center of Paris, to pursue his studies. Law school, however, was largely an excuse that Racine used in order to enjoy all the niceties of Parisian life, and while enrolled at Harcourt he began his first forays into literature. His earliest surviving works consist of sonnets and other poems, mostly written in praise of various noblemen whom Racine had befriended in Paris' lively social scene.

Racine, however, knew that he could not make a living writing poetry alone. He failed to obtain a patron who would support his writings while in Paris so, after spending a fruitless two years in the provinces hoping to find financial support from Jansenists, Racine returned to Paris in 1663 to take up the only other option available to a struggling artist in need of money—he began to write plays. His first play, Amasie, was never produced and there is no surviving copy. His next play, La Thébaïde ou les frères ennemis (“The Thebaide, or the Enemy Brothers”), produced in 1664 by Jean-Baptiste Molière's acting troupe, was an immediate success. The play, based on the story of Oedipus, follows the tragedy of Oedipus' twin sons, who fight one another to the death over the rulership of Thebes.

Racine followed this play up immediately with another work based on a Greek legend, Alexandre de large (“Alexander the Great”) in 1665. Although at its premiere the play was performed, once again, by Molière’s company, Racine had secretly made an agreement with another troupe of more talented actors, so a week later Alexandre opened to positive reviews and the new troupe was given Racine's blessing to "re-premiere" the play. Molière was infuriated by Racine's defection, and the two massively talented playwrights never spoke to one another again.

During his growing popularity as a playwright, Racine began to receive increasingly severe reprimands from his former colleagues at Port-Royal. The Jansenists, as a rule, held a very low opinion of the theater, and Racine's activities as a playwright were seen as scandalous. Racine would publicly defend himself against his Jansenist critics, ultimately severing himself from the movement entirely. Moreover, in order to win favor from the relatively small community of Parisian literary critics, Racine began to carry on a public feud with rival tragedian, Pierre Corneille.

The energy Racine had to dedicate to fending off his rivals and critics did not slow down his prolific activity. In 1667 he produced what many consider to be his first true masterpiece, Andromaque (“Andromache”), following it up immediately with his only comedy Les Plaideurs (“The Litigants”). In 1669 and 1670 he returned to tragedy, writing two linked plays set in ancient Rome, Britannicus and Bérénice. Moving away from the classics temporarily, Racine experimented in his next two plays Bajazet and Mithridate, setting his tragedies in the Middle East, exploring nearly contemporary events in Turkish history. Finally, however, Racine returned to the genre that had made him famous with his two late masterpieces, publishing Iphigénie en Aulide (“Iphigenia in Aulis”) in 1674 and, in 1677, the play that would cement his reputation for all time, Phèdre.

Although not taught in French primary schools as frequently as Andromaque and Britannicus, Phèdre is acknowledged by actors, playwrights, directors, and critics alike to be Racine's most accomplished work. The play, based again on a Greek legend, this time Euripides' play Hippolytus, focuses on the young prince Hippolyte, his father, King Thésée, and his step-mother, Phèdre. As the play opens, Thésée has been missing for some time is presumed dead. Taking advantage of his father's absence, Hippolyte is about to flee the kingdom with Aricie, a woman who belongs to a rival clan, in order to marry her. Meanwhile, Phèdre confesses to one of her servants that she has fallen in love with Hippolyte, her step-son. Thésée's death is mistakenly announced and—believing she is free from her husband—Phèdre confesses to Hippolyte that she is in love with him. King Thésée, very much alive, then returns to the city and, in a panic, Phèdre falsely tells him that Hippolyte attempted to seduce her. Thésée promptly has his son executed. The play ends on a note of extreme sorrow, with Phèdre grieving over her decision to sacrifice the man she loves in order to save face, and Thésée in despair over having been coerced into killing his own son.

At the height of his career, Racine abruptly abandoned playwriting. Speculations abound over Racine's reasons, although a number of events in his life appear to have motivated his decision. After years of being a major celebrity, Racine was finally able to secure patronage; King Louis XIV appointed him, along with his friend, Nicolas Boileau, to the position of royal historiographer. Racine also appears at this time to have felt regret over his violent separation from the Jansenists, and in the preface to Phèdre he expresses his desire to reconcile with his religious upbringing. Moreover, playwriting was simply not a very genteel way to make a living in seventeenth-century France and, now that he was a member of Louis XIV's court, it behooved him to distance himself as much as possible from the theater.

Racine continued to write, primarily devoting his time to historical works pertinent to the king, as well to occasional poems and a small book of spiritual songs which was published during his time at court. In 1689 the king's mistress, Madame de Maintenon, urged Racine to return to playwriting; at her request, he wrote two short religious plays Esther and Athalie that were performed by the girls of the convent of Saint-Cyr. Having been appointed in 1696 to the post of secretary to the king, Racine had secured his legacy and fortune; at the end of his life he turned to writing a history of Port-Royal des Champs. This work was left uncompleted at his death in 1699 of liver cancer; he was buried, at his request, in Port-Royal, though his body was moved in 1710 to the tomb of Saint-Étienne-du-Mont, in Paris.

Retrieved from https://www.newworldencyclopedia.org/p/index.php?title=Jean_Racine&oldid=1011228
Categories:
This page was last edited on 1 May 2018, at 20:44.
Content is available under Creative Commons Attribution/Share-Alike License; additional terms may apply. See Terms of Use for details.