Manasseh of Judah (c. 699 - c. 642 B.C.E.) was the king of Judah and the only son and successor of Hezekiah. His mother's name is recorded as Hephzibah.

Beginning his reign at twelve years old, Manasseh ruled Judah longer than any other king. A vassal of the Assyrian Empire, he reversed the monotheistic reforms of his father. He is severely criticized by biblical writers, condemning him as an idolater who killed his religious opponents and brought God's wrath upon the nation.

The Book of Chronicles, however, reports that Manasseh later repented of his idolatry after being taken captive by the Assyrians. The deuter-canonical Prayer of Manasseh records his supplication to God, in which he begs for forgiveness. At the same time, the Book of Kings insists that Manasseh's sin was so great that God did not relent from punishing the people and kings of Judah. Ultimately, they are brought into Babylonian exile as punishment for their complicity in his crimes.

As one of the Davidic kings, in Jewish tradition, Manasseh is thought to be an ancestor of the coming Messiah and a forefather of Jesus Christ in Christianity. 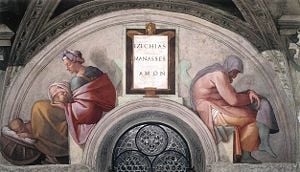 Michelangelo's Hezekiah-Manasseh-Amon. Manasseh is probably the man on the right, pictured in meditative remorse, while the woman on the left is thought to be his wife, the mother of Amon and the unnamed son whom Manesseh offered as a sacrifice. Hezekiah is depicted outside of the current frame.

In the time of Manasseh's father Hezekiah, Sennacherib, the king of Assyria, conquered in the northern kingdom of Israel and also captured every city of Judah except Jerusalem. Judah thus became a tribute-paying vassal of Assyria and remained so during the reigns of the Assyrian kings Esarhaddon and Assurbanipal.

In religious policy, Hezekiah had once tolerated the worship of gods other than Yahweh, but under the influence of the prophet Isaiah, he instituted a major religious reform, not only banning Baal worship in the capital, but also destroying at least some of the Israelite high places outside of Jerusalem and even doing away with the famous bronze serpent constructed by Moses, on the grounds that it had become on object of idolatry.

The Assyrian kings continued to take an active interest in their western domains, as shown by their sending emissaries to visit Hezekiah after an illness (2 Kings 20:12) and their settlement of colonists in Samaria (Ezra 4)m the former northern Kingdom of Israel. Both Esarhaddon and Assurbanipal also carried out military campaigns against Egypt to the south and maintained protracted sieges of the strong cities of Phoenicia to Judah's north. According to 2 Kings 21:1, Manasseh was still a boy of 12 at his father's death. His reign, estimated at 45 years or more, is the longest recorded in the history of Judah.

Though such a long reign as Manasseh's would normally be seen as a sign of God's favor, he is strongly condemned by the biblical writers. He reversed the religious reforms of his father Hezekiah by granting his people the freedom to worship other gods than Yahweh, even in the Temple of Jerusalem (2 Kings 21), the national shrine of Judah. He also reinstated the high places outside of Jerusalem that Hezekiah had closed or destroyed. The writer of Kings accuses him in the most vehement terms, not only of idolatry but of murder and the sacrifice (The phrase "He made his own son pass through the fire" is normally taken to mean a human sacrifice, although it may also be interpreted as an ordeal of fire in which the victim survives.) of one of his own sons: 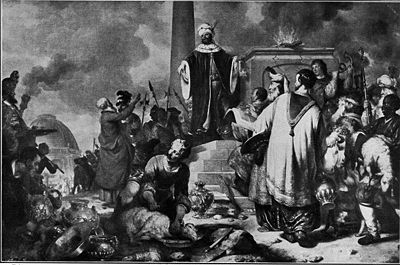 He rebuilt the high places his father Hezekiah had destroyed; he also erected altars to Baal and made an Asherah pole, as Ahab king of Israel had done. He bowed down to all the starry hosts and worshiped them. He sacrificed his own son in the fire, practiced sorcery and divination, and consulted mediums and spiritists… Manasseh led (the people) astray, so that they did more evil than the nations the Lord had destroyed before the Israelites… Manasseh also shed so much innocent blood that he filled Jerusalem from end to end (2 Kings 2-16).

During Manasseh's nearly half-century reign, the popular worship was thus a medley of native and foreign cults, the influence of which was slow to disappear (Ezek. 8). Some of the prophets of Yahweh were reportedly put to the sword (Jer. 2:30), and those who sympathized with prophetic ideas were in peril. An apocryphal tradition preserved in the Lives of the Prophets and rabbinical literature holds that among the martyrs during Manasseah's reign was the prophet Isaiah, who was cut in two with a saw.

The Chronicler declares that as punishment for Judah's sins under Manasseh, God sent "the captains of the host of the King of Assyria," who took Manasseh in chains to Babylon (2 Chron. 33:11). This implies that Manasseh must have engaged in some kind of revolt against Assyria or refused to pay the customary tribute. However, in 2 Kings, written within a century or so of Manasseh's death, there is no hint of revolt or battles between Judah and Assyria nor any mention of his capture.

Chronicles goes on to report that Manasseh then truly repented of his sins. "The Lord was moved by his entreaty and listened to his plea," (2 Chron. 33:13), and Manasseh was thus restored to his throne. He then demonstrated the genuineness of his change of heart by devoting himself to measures of defense, administration, and monotheistic religious reform.

He got rid of the foreign gods and removed the image from the temple of the Lord, as well as all the altars he had built on the temple hill and in Jerusalem; and he threw them out of the city. Then he restored the altar of the Lord and sacrificed fellowship offerings and thank offerings on it, and told Judah to serve the Lord, the God of Israel. The people, however, continued to sacrifice at the high places, but only to the Lord their God (2 Chron. 33:15-17).

The deuterocanonical Prayer of Manasseh purports to be the penitential prayer spoken by Manasseh, in which he declares:

You, O Lord, God of the righteous, have not given repentance for the righteous, for Abraham and Isaac and Jacob, who had not sinned against You, but You have given repentance for me, the sinner. For I have sinned more than the number of sand of the sea… I have set up abominations and multiplied provocations. And now I bend the knee of my heart, begging for Your clemency. I have sinned, O Lord, I have sinned; and I know my lawless deeds. I am asking, begging You: Forgive me, O Lord, forgive me! Do not destroy me with my lawless deeds, nor for all ages keep angry with me, nor condemn me to the depths of the earth, for You, O Lord, are the God of those who repent.

Such accounts, however, are difficult to square with the writing of the prophet Jeremiah who insisted that the crying need in the days of Josiah, Manasseh's successor after the two-year reign of Amon, was religious reform. Jeremiah also declared that Manasseh's sins had yet to be expiated: "I will make (my people) abhorrent to all the kingdoms of the earth because of what Manasseh son of Hezekiah king of Judah did in Jerusalem" (Jer. 15:4).

Despite his reported repentance, Manasseh has gone down in history as the worst of the kings of Judah, for whose sins the nation was punished by the experience of the Babylonian exile.

The Book of Kings (2 Kings 21:11-14) reports a prophecy to the effect that "Manasseh king of Judah has committed… detestable sins. He has done more evil than the Amorites who preceded him and has led Judah into sin with his idols. Therefore this is what the Lord, the God of Israel, says: 'I am going to bring such disaster on Jerusalem and Judah that the ears of everyone who hears of it will tingle… I will wipe out Jerusalem as one wipes a dish, wiping it and turning it upside down. I will forsake the remnant of my inheritance and hand them over to their enemies.'"

Even King Josiah, whom the Bible praises as the greatest king since David, could not turn away God's wrath: "Neither before nor after Josiah was there a king like him who turned to the Lord as he did—with all his heart and with all his soul and with all his strength, in accordance with all the Law of Moses. Nevertheless, the Lord did not turn away from the heat of his fierce anger, which burned against Judah because of all that Manasseh had done to provoke him to anger" (2 Kings 23:25-26).

A similar explanation is given for military raids during Jehoiakim's reign: "The Lord sent Babylonian, Aramean, Moabite, and Ammonite raiders against him… Surely these things happened to Judah according to the Lord's command, in order to remove them from his presence because of the sins of Manasseh and all he had done" (2 Kings 24 24:1-3).

As one of the Davidic kings, Manasseh is to be one of the ancestors of the Messiah in Jewish tradition, and he is also one of Jesus' ancestors according to genealogy of the Gospel of Matthew. Nevertheless, despite the testimony of Chronicles that God heard his prayer of repentance, he is still generally considered the most evil of Judah's kings.