The Jebusites (Hebrew: יְבוּסִי) were a Canaanite tribe who, according to the Hebrew Bible, inhabited the region around Jerusalem prior to the capture of the city by King David. Before that time, Jerusalem was called both Jebus and Salem. The Tanakh contains the only surviving ancient text known to use the term Jebusite to describe the pre-Israelite inhabitants of Jerusalem; according to the Table of Nations (Genesis 10), the Jebusites are identified as a Canaanite tribe, listed in third place among the Canaanite groups, between the Hittites and the Amorites.

The Books of Kings state that once Jerusalem had become an Israelite city, the surviving Jebusites were forced by Solomon to become serfs;[1] though since some archaeologists believe that the Israelites were simply an emergent subculture in Canaanite society, it is possible that this is an etiological explanation for serfs than a historically accurate one.[2] It is unknown what ultimately became of these Jebusites, but it seems logical that they were assimilated by the Israelites. 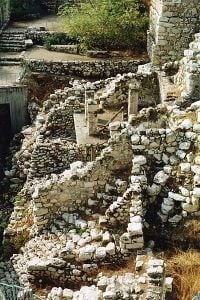 According to some Biblical chronologies, the city of Jerusalem was reconquered by King David in either 1003 B.C.E.,[3] or 869 B.C.E.[4] According to the Books of Samuel, the Jebusites still had control of Jerusalem at the time of King David, but David wished to take control of the city; understandably the Jebusites contested his attempt to do this, and since Jebus was the strongest fortress in Canaan they gloated that even the blind and lame could defeat David's army; an alternative, equally valid, translation of the Jebusite's statement is that they said David would have to defeat the blind and lame before anyone else.[5] In reference to a passage[6] in the Books of Samuel, which refers to a saying about the blind and the lame, Rashi quotes a midrash which argues that the Jebusites had two statues in their city, with their mouths containing the words of the covenant between Abraham and the Jebusites; one figure, depicting a blind person, represented Isaac, and the other, depicting a lame person, representing Jacob.[7] According to the version of the story in the masoretic text, David managed to conquer the city by a surprise attack, led by Joab, through the water supply tunnels (Jerusalem has no natural water supply except for the Gihon spring). Upon its discovery in the nineteenth century, Warren's shaft, part of a system which connects the spring to the city, has been cited as evidence for the plausibility of such a line of attack; however, the discovery, at the turn of the twenty-first century, of a set of heavy fortifications, including towers, around the base of the Warren's shaft system and the spring, has made archaeologists now regard this line of attack as implausible, as it would be an attack against one of the most heavily fortified parts, and hardly a surprise.[8] According to many textual scholars the claim in the masoretic text could simply be a scribal error; the Septuagint version of the passage states that the Israelites had to attack the Jebusites with their dagger[s] rather than through the water shaft.

Prior to modern archaeological studies, most Biblical scholars held the opinion that the Jebusites were identical to the Hittites.[9] However, an increasingly popular view, first put forward by Edward Lipinski, professor of Oriental and Slavonic studies at the Catholic University of Leuven, is that the Jebusites were most likely an Amorite tribe; Lipinski identified them with the group referred to as Yabusi'um in a cuneiform letter found in the archive of Mari, Syria.[10] As Lipinski noted, however, it is entirely possible that more than one clan or tribe bore similar names, and thus that the Jebusites and Yabusi'um may have been separate people altogether.[11] In the Amarna letters, mention is made of the contemporaneous king of Jerusalem was named Abdi-Heba, which is a theophoric name invoking a Hurrian goddess named Hebat; unless a different ethnic group occupied Jerusalem in this period, this implies that the Jebusites were Hurrians themselves, were heavily influenced by Hurrian culture, or were dominated by a Hurrian class.

The Bible describes the Jebusites as dwelling in the mountains, besides Jerusalem.[12][13] According to the Book of Joshua, Adonizedek led a confederation of Jebusites, and the tribes from the neighboring cities of Jarmut, Lachish, Eglon and Hebron against Joshua, but was soundly defeated, and killed. However, the Book of Joshua[14] states that Judah could not dislodge the Jebusites, who were living in Jerusalem. The Book of Judges also portrays the Jebusites as continuing to dwell at Jerusalem, within the territory otherwise occupied by the Tribe of Judah and Tribe of Benjamin.

Certain modern archaeologists now believe that the conquest of Canaan by the Israelites under Joshua simply did not happen, and that the Israelites actually originated as a subculture in Canaanite society;[15] some biblical scholars believe that the accounts in the Book of Joshua are cobbled together from folk memory of disconnected battles, with numerous different aggressors, which occurred over a time period of over 200 years.[16] Nevertheless, this is no reason to conclude that the battle itself did not happen; these scholars simply argue that if it did, then it had different protagonists, and for different reasons; though most of their peers in archaeology and biblical studies strongly reject those conclusions.[17] 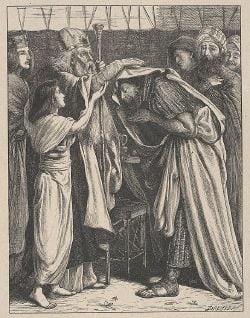 According to the Tanakh, a Jebusite priest-king named Melchizedek ruled the area of Jerusalem at the time of Abraham, and Joshua later defeated another Jebusite king named Adonizedek. The zedek part of these names mean king and lord, respectively, and most biblical scholars believe that it is a reference to a deity named Zedek, who was the main deity worshipped by the Jebusites (making the names my king is Zedek and my lord is Zedek).[18] Scholars are uncertain, however, whether Melchizedek was himself intended by the redactors of Genesis to be understood as a Jebusite, rather than a member of another group in charge of Jerusalem prior to the Jebusites - Jerusalem is referred to as Salem rather than Jebus in the passages of Genesis describing Melchizedek.[19]

Another Jebusite, Araunah (referred to as Ornan by the Book of Chronicles) is described by the Books of Samuel as having sold his threshing floor to King David, upon which David then constructed an altar, the implication being that the altar became the core of the Temple of Solomon. Araunah means the lord in Hittite, and so most scholars, since they consider the Jebusites to have been Hittite, have argued that Araunah may have been another king of Jerusalem;[20] some scholars additionally believe that Adonijah is actually a disguised reference to Araunah, the ר (r) having been corrupted to ד (d).[21] The narrative itself is considered by scholars to be aetiological and of dubious historicity;[22] Melchizedek, as a priest as well as king, was likely to have been associated with a sanctuary, probably dedicated to Zedek, and scholars suspect that the Temple of Solomon was simply a natural evolution of this sanctuary.[23]

According to classical rabbinical literature, the Jebusites derived their name from the city of Jebus, the ancient Jerusalem, which they inhabited.[24] These rabbinical sources also argued that as part of the price of Abraham's purchase of the Cave of Machpelah, which lay in the territory of the Jebusites, the Jebusites made Abraham grant them a covenant that his descendants would not take control of Jebus against the will of the Jebusites, and then the Jebusites engraved the covenant into bronze;[25] the sources state that the presence of the bronze statues are why the Israelites were not able to conquer the city during Joshua's campaign.[26]

The classical era rabbis go on to state that King David was prevented from entering the city of Jebus for the same reason, and so he promised the reward of captaincy to anyone who destroyed the bronzes - Joab performing the task and so gaining the prize.[27] The covenant is dismissed by the rabbis as having been invalidated due to the (defensive) war the Jebusites fought against Joshua, but nevertheless David (according to the rabbis) paid the Jebusites the full value of the city, collecting the money from among all the Israelite tribes, so that the city became their common property.[28]