The Book of Micah (Hebrew: ספר מיכה) is one of the books of the Hebrew Bible and the Christian Old Testament, traditionally attributed to Micah the prophet. It presents the oracles of Micah, who was active in the southern Kingdom of Judah during the late eighth century B.C.E. during the ascendancy of the early Assyrian Empire. Micah decried the social injustice of Judah's rulers and its upper class, as well as the corruption of its priests and even some of his fellow prophets. He warned of the impending Assyrian threat, which he saw as the consequence of Judah's sins.

The Book of Micah is also notable for its more hopeful passages, portraying God's love and mercy for His people and promising the coming of a righteous king from Bethlehem who would establish a just society and make Judah great among the nations. Scholars debate which portions of the book indeed originate from Micah's time, and which may have been added at a later date.

The Book of Micah provided an important contribution in the prophetic tradition of ethical monotheism and the Judeo-Christian commitment to social justice.

Micah reportedly prophesied during the reigns of the Judean kings Jotham, Ahaz, and Hezekiah, roughly 735–700 B.C.E. He was brought up in the small town of Moreseth (likely Moresheth-Gath in the Philistine plain). The prophet’s name, in its elongated form “Micayahu,” is commonly translated “Who is like God?” or possibly, "He who is like God."

The quality of his prophecy has led many scholars to the conclusion that he received a good education and may have been one of the wealthier members of the community. Regardless of his background, he was well aware of the avarice and injustices of the rich.

The book's prologue indicates that Micah prophesied during the reigns of Jotham (742–735 B.C.E.), Ahaz (735–715 B.C.E.), and Hezekiah (715–687 B.C.E.), a maximum period of 55 years, However, it is not likely that he was active during all of that time. Together with Amos, Hosea, and Isaiah, he was among the earliest of the literary prophets—those whose messages were recorded in some length, as books bearing their names, rather than as brief passage included in longer histories such as the books of Samuel and Kings. 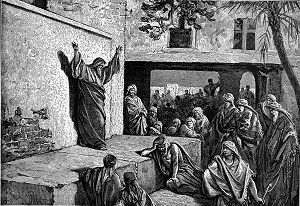 Historically, King Jotham was able build on the success of his father Uzziah and maintained a considerably prosperous reign. Tiglath-Pileser III of Assyria, meanwhile, increased considerably in power, thriving long into the reign of Jotham's son Ahaz. Facing an invasion from the combined forces of Israel and Syria, King Ahaz became Tiglath-Pileser's vassal. After visiting the Assyrian king in Damascus, Ahaz remodeled the Temple of Jerusalem after the pattern of the Temple of Asshur in Damascus and was accused by the prophets of tolerating idolatry. His son Hezekiah came into power around 716, rebelled against Assyria (2 Kings 18), and instituted a strict Yahwistic religious reform. The Book of Jeremiah indicates that Micah may have risked his life in prophesying at the beginning of Hezekiah's reign, but that his prophecies were heeded.

Conservative biblical scholars attribute virtually the entire Book of Micah to his authorship. However, critical scholars attribute much of the material to others. It is generally agreed that Micah composed chapters 1 through 3. Chapters 3-5 are rejected by critical scholars primarily because they foretell specific events in the sixth century B.C.E. long after Micah's death. Chapters 6-7 contain elements of a universalistic religious outlook which was not widely present in Judaism until well after Micah's day and are thus rejected by some while accepted by others. Some of these passages are repeated verbatim in the Book of Isaiah. It is difficult to know which borrows from which. In any case, critical scholars tend to view such passages as originating in exilic times, whose viewpoint they reflect.

The book may be divided into three sections:

Chapters 1–3 mainly consist of oracles of judgment. Judgment in Micah is seen in the destruction of Samaria—the capital of the northern kingdom of Israel—in the coming of an invader (probably Assyria) against Jerusalem, in the loss of the land of the greedy, in their being abandoned by Yahweh, in Judah's future shame over the false prophets, in the siege of Jerusalem, and the purging of the land from idolatry and war.

Chapters 4–5 consist of oracles of hope. The prophet indicates that those conditions which brought on God's anger would not prevail forever. Judgment would come, but a saved, chastened, and faithful remnant would survive. A new king, hailing from "Bethlehem Ephrathah" would replace the present weak king on the throne of Judah. He would reign in the majesty of the name of Yahweh. God's people would dwell securely in the face of the coming Assyrian threat and the "remnant of Jacob will be among the nations, in the midst of many peoples, like a lion among the beasts of the forest, like a young lion among flocks of sheep." (5:8)

Chapters 6–7 begin with judgment and move to hope. God poignantly asks what He has done to offend His people and declares that He only asks of them: "To act justly and to love mercy and to walk humbly with your God." (6:8) God specifies His indictment against the people in 6:9–16. Violence, deception, and crooked business practices were rampant. They would bring desolation and destruction to the land. The prophet accuses Judah of following the statutes of the northern kings Omri and Ahab whose alleged corruption and tolerance of Baal worship brought ruin to their nation. He despairs that "The godly have been swept from the land; not one upright man remains." (7:2) Nevertheless, the book concludes with a prayer of hope for the nation's redemption and that God "will be true to Jacob, and show mercy to Abraham, as you pledged on oath to our fathers in days long ago." (7:20)

Micah was particularly aware of the greed of the wealthy, and he speaks boldly against social injustice. He was also a firm opponent of Ahaz' soft policy toward idolatry, believing instead that Yahweh alone must be worshiped by His people. Micah's prophecies provide a dire warning that Judah will face destruction by the Assyrian menace if it does not repent. The Book of Micah—whether written in total by the prophet himself or added to by later writers—also provides a message of hope for redemption and the coming of a new ruler who would make Judah great among the nations.

After denouncing the northern kingdom of Israel for its toleration of idolatry at its high places, he asks: "What is Judah's high place? Is it not Jerusalem?" (1:5), possibly a denunciation of Ahaz' decision to remodel the Temple along Assyrian lines. Turning to issues of social justice, he curses those in power who “plot evil on their beds,” (2:1) while in verses 3:1-3, he indicts the leaders of Judah, declaring: “you ought to know what is right, but you hate good and love evil.”

Micah recognized power as a God-given responsibility but saw, instead of thanksgiving and acts of love and mercy, the powerful conniving to maintain their wealth and further subjugate those of lesser status. He aimed his criticism not only at the politically powerful but also at the religious establishment. At the time, certain other prophets urged Micah to keep silent on the issue of injustice, but Micah excoriated them for their hypocrisy. Neither prophet, nor priest, nor ruler was exempt from his criticism:

Her leaders judge for a bribe,
her priests teach for a price,
and her prophets tell fortunes for money.
Yet they lean upon the Lord and say,
"Is not the Lord among us? No disaster will come upon us."
Therefore because of you, Zion will be plowed like a field,
Jerusalem will become a heap of rubble,
the Temple hill a mound overgrown with thickets. (3:11-12)

Micah condemned religious practice when it was not combined with ethical performance (3:9–10, 6:3–5, 6–8). The book's middle chapters provide the hope of redemption and the coming of a messianic king. Fervently, yet concisely, it speaks to the issues of the day in terms of the nation's covenant obligations with the God of Israel.

As one of the first of the books of the literary prophets, the Book of Micah left an indelible imprint on the history of Judaism, and later on Western tradition generally. His was one of the first prophetic calls for social justice as opposed to mere religious formalism, as he declared:

Will the Lord be pleased with thousands of rams, with ten thousand rivers of oil?
Shall I offer my firstborn for my transgression, the fruit of my body for the sin of my soul?
He has showed you, O man, what is good. And what does the Lord require of you?
To act justly and to love mercy and to walk humbly with your God. (6:7-8)

The prophetic tradition of social justice lies at the roots of the modern movements for social change based on the Judeo-Christian tradition. The Book of Micah—along with those of Amos, Hosea, Jeremiah and Isaiah—contributed the seminal concepts on which those movements rest.

Micah was also one of the first prophets to promise the coming of a righteous king, later known as the Messiah. The tradition of the Messiah's being born specifically in Bethlehem is found nowhere else in the Old Testament except the Book of Micah.

Retrieved from https://www.newworldencyclopedia.org/p/index.php?title=Micah,_Book_of&oldid=1086492
Categories:
Hidden category:
This page was last edited on 9 November 2022, at 16:52.
Content is available under Creative Commons Attribution/Share-Alike License; additional terms may apply. See Terms of Use for details.