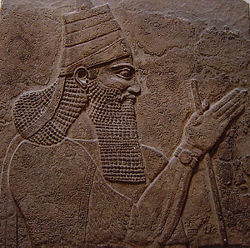 Tiglath-Pileser III—stela from the walls of his palace (British Museum, London)

Tiglath-Pileser III (Akkadian: Tukultī-apil-Ešarra, "my trust is in the son of Esharra") was a prominent king of Assyria in the eighth century B.C.E. (745–727 B.C.E.). He initiated a major phase of Assyrian expansion and is widely regarded as the founder of the Neo-Assyrian Empire.

Taking his throne name from two earlier Assyrian monarchs, Tiglath-Pileser had been the governor a northern province before seizing power from Ashur-nirari V during a period of weakening Assyrian influence. He quickly consolidated power and initiated effective reforms in the empire's military and administrative apparatus. In alliance with King Ahaz of Judah, he succeeded in dominating both Syria and Palestine. Later, he accomplished the merger of Babylonia and Assyria, making his kingdom the most powerful in the world.

The biblical writers viewed Assyria's rise as God's way of punishing the kingdoms of Israel and Judah for their sins. The Bible confirms that Tiglath-Pileser conquered a large portion of the northern Kingdom of Israel and forced many of its inhabitants into exile. The Kingdom of Judah, meanwhile, became his willing vassal and ally.

Tiglath-Pileser is considered to be one of the most successful military commanders in history, bringing most of the world known to the ancient Assyrians under his control before his death. 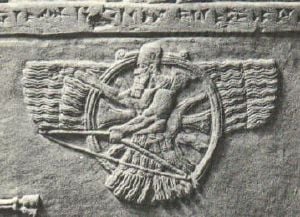 Symbol of the Assyrian god Ashur, whose name is related to the last two syllables of in "Tiglath-Pileser."

Assyria had been relatively weak both politically and militarily at the time of Adad-nirari III (reigned 810–783 B.C.E.), and several former vassal nations had stopped paying tribute formally required by treaty. In 745, the future Tiglath-pileser III, the then governor of the northern Kalhu province, rebelled against Adad-nirari III's son, Ashur-nirari V, and seized the throne.

The name Tiglath-Pileser was a throne-name—given to the king on his accession to the throne, rather than a name given at birth. In translation, it means "My Trust is the Heir of Esharra." The name is related to the Assyrian deity Asshur or his temple and is given in several different forms in historical records. The Bible records him as Tilgath-pilneser (2 Chronicles 28:20) and also as Pul (1 Chronicles 5:26 and 2 Kings 15:19,20). At Babylon, Tiglath-Pileser was known as Pulu.

In his inscriptions, Tiglath-Pileser refers to himself as a son of Adad-nirari III. While it is plausible that he was indeed an otherwise unknown son of Ashur-nirari V's father, the truthfulness of this claim is doubted.

Establishing his capital at the northern city of Nimrud, Tiglath-Pileser III acted quickly to consolidate his power and reorganize the territorial administration of Assyria.

The first of these reforms entailed thwarting the powers of the high Assyrian officials. During the reigns of his predecessors, officials such as the Šamši-ilu—who was turtanu and a prominent official since the time of Adad-Nirari III—often led their own campaigns and erected their own commemorative stelae without mentioning the king at all.[1] Tiglath-Pilesar often appointed eunuchs as governors of newly conquered provinces, thus removing the temptation that governors would gather power on behalf of their descendants. He also diminished the power of his officials by reducing the size of the provinces, thus decreasing their resources, should they have desired to incite a revolt. Subsequently, there were more provinces, more governors (most of which were eunuchs), and less power per governor. This new policy also meant that Tiglath-pileser no longer relied directly on local native kings to abide by treaties of vassalage, but placed Assyrian officials in positions of authority both to support the local ruler and ensure that he remained loyal. By 738, 80 such provincial administrators were reporting directly to Tiglath-Pileser and his secretaries, enabling continuous feedback regarding the situation in outlying lands. The officials were responsible for taxation, storing military supplies, and raising forces for the new, reorganized Assyrian army.

The second reform involved the army itself. Instead of a largely native Assyrian army, which normally campaigned only in the summertime, Tiglath-Pileser incorporated large numbers of conquered people into the army. This force mainly comprised the infantry, whereas the native Assyrians comprised the cavalry and chariotry. As a result of Tiglath-Pileser's military reforms, the Assyrian Empire was armed with a greatly expanded army which could campaign throughout the year. He also organized a new intelligence system, utilizing his increased diplomatic and regional administrative apparatus, with reports transmitted through staging posts strategically located throughout the empire. 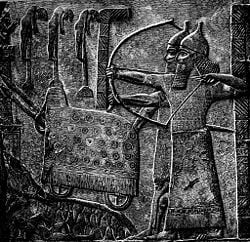 In his first regnal year (745) Tiglath-pileser already claimed to have annexed several cities of Babylonia, subsequently placing his eunuch over them as governor, although he would gain control of the city of Babylon itself until 729. He also quickly defeated his northern neighbor, Urartu (in modern Armenia), whose hegemony under Sarduri II had extended to northern Mesopotamia and Syria and controlled key trade routes on which Assyrian power relied. Soon, he also defeated the Medes and then proceeded against the Neo-Hittites, Syria, and Phoenicia.

In Syria, he took Arpad in 740 B.C.E. after three years of siege, destroying the city and annexing its territory as a province of Assyria. He subjected Hamath, located north of Damascus, to tribute. In the same year, Assyrian inscriptions record a victory over King Azariah (Uzziah) of Judah, although the Bible does not mention this. In 733 B.C.E. his armies conquered Philistia on the Mediterranean coast. They destroyed the key Syrian city of Damascus and occupied most of the ancient kingdom of Israel (732), with its northern regions becoming Assyrian provinces. The Bible speaks in this context of an agreement between Tiglath-Pileser and King Ahaz of Judah in opposition to an Syria-Israel alliance (see below). Royal inscriptions of Tiglath-Pileser confirm the biblical account that many of Israel's inhabitants were deported to other parts of the Assyrian empire, a practice that was commonly enacted by his predecessors and would be repeated by his successors.

To the east, by October 729, Tiglath-Pileser claimed to have assumed total control of Babylon, capturing the Babylonian king Nabu-mukin-zeri and having himself crowned as "King Pulu of Babylon." Map showing Tiglath-Pileser's conquests (green) and his deportation of the Israelites. He also recaptured lands shown in pink which had recently gained independence from Assyrian rule in Syria and Babylonia.

Biblical records, sometimes corroborated by Assyrian ones, shed further light on Tiglath-Pileser's reign and its impact on the history of the region. The Books of Kings indicate that Tiglath-Pileser exacted 1000 talents of silver tribute from King Menahem of Israel (2 Kings 15:19). He later defeated Manahem's successor Pekah (15:29), who had allied with King Rezin of Syria against both Assyria and the Kingdom of Judah.

The Bible preserves part of a purported letter from King Ahaz of Judah to Tiglath-Pileser, asking for aid against the above-mentioned alliance: "I am your servant and vassal. Come up and save me out of the hand of the king of Aram (Syria) and of the king of Israel, who are attacking me" (2 Kings 16:7). The biblical writers portray Tiglath-Pileser's capture of Damascus as resulting from Ahaz' gift of silver and gold to him from the treasury of the Temple of Jerusalem. They also report that Tiglath-Pileser deported the inhabitants of Damascus and put King Rezin to death.

The conquering Tiglath-Pileser received Ahaz of Judah in Damascus to celebrate the victory. There, the Hebrew king was apparently much impressed by the celebration, ordering a new altar constructed in the Temple of Jerusalem based what he saw in Damascus. He used this as the main altar for royal sacrifices and demoted the former bronze altar for use in divination. Ahaz also ordered other changes at the Temple "in deference to the king of Assyria." While the Books of Kings speak mainly of architectural changes, 2 Chron 28:23 accuses Ahaz of worshiping foreign gods upon the new altar. His successor Hezekiah would be much praised by the biblical writers for returning Judah to a more strictly monotheistic rule.

In addition to making Judah his vassal and capturing Damascus, the Bible confirms that Tiglath-Pileser conquered much of the northern kingdom of Israel. He seized the northern half of of the kingdom and deported populations from the tribes of Reuben, Gad, and Manasseh to the Assyrian lands of Halah, Habor, Hara, and the Gozan river (1 Chron. 5:26). Meanwhile, an Assyrian inscription boasts that Tiglath-Pileser had earlier made Hoshea king of Israel after Hoshea's predecessor had been overthrown, leading some scholars to speculate that Hoshea's conspiracy against Pekah, who had rebelled against Assyrian supremacy, received active support from Assyria. Hoshea later withheld tribute from Assyria under Shalmaneser V and was removed from his capital of Samaria, after which the final destruction of Israel commenced. 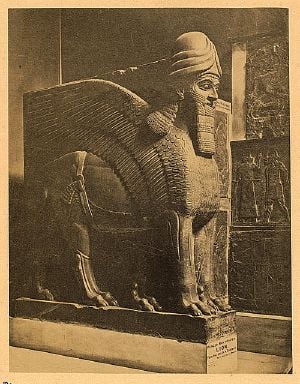 Portal Guardian from Nimrud, now at the British Musuem.

Tiglath-Pileser III's conquests and reforms led to the establishment of the Assyria as the center of a true empire. Assyria would henceforth remain the dominant force in the region for several generations. Tiglath-Pileser built a royal palace in Nimrud (the so-called "central palace"), which was later dismantled by Esarhaddon who reigned from 681 to 669 B.C.E. and who returned the capital to Niniveh. On the sculptured slabs decorating this palace Tiglath-Pileser caused his royal annals to be engraved, across the bas-reliefs depicting his military achievements.

On his death, Tiglath-Pileser III was succeeded by his son Ululayu, known by the throne name Shalmaneser V, who further campaigned in the Levant and conquered the capital of Israel, Samaria. The biblical writers believed that the rise of Assyria under Tiglath-Pileser and his successors was brought about by God's providence to punish Judah and Israel for their sins. The Kingdom of Israel was destroyed by Assyrian forces under Shalmaneser during the reign of King Hoshea, circa 722 B.C.E., while the Kingdom of Judah under Hezekiah lost every city except Jerusalem to the Assyrian army of King Sennacherib.

Retrieved from https://www.newworldencyclopedia.org/p/index.php?title=Tiglath-Pileser_III&oldid=864090
Categories:
Hidden category:
This page was last edited on 24 November 2008, at 20:52.
Content is available under Creative Commons Attribution/Share-Alike License; additional terms may apply. See Terms of Use for details.