Tikal (or Tik’al, according to the more current orthography) is the largest of the ancient ruined cities of the Mayan peoples—a people who built a great civilization that brought about impressive accomplishments in art, architecture, literacy, mathematics, and astronomy. Tikal was one of the major cultural and population centers of this civilization. It is located in the El Petén department of Guatemala. Now part of Guatemala's Tikal National Park, it is a UNESCO World Heritage Site as well as a Biosphere Reserve. The nearest large towns are Flores and Santa Elena, about 18.5 miles (30 km) away.

In addition to the ruins of the Mayan culture, the reserve protects a large area of tropical rainforest with a wide range of unspoiled natural habitat. However, it is considered by many as first and foremost an important historic and cultural site. Many mounds have been covered by a thick layer of jungle for over a thousand years and are thus well-preserved. The ceremonial center of the ruins contains temples and palaces, and public squares accessed by means of ramps. Remains of dwellings are scattered throughout the surrounding countryside.

While Tikal dominated the Maya region politically, economically, and militarily during the Classic Period (ca. 200 C.E. to 900 C.E.), evidence dates the city’s eventual abandonment by the end of the tenth century. Though the cause if its demise is uncertain, it certainly played a significant role in the history of The Americas. Its ruins remain an incredible reminder of a previous culture, one which harmonized the beauty of its natural surroundings with human creativity.

The name Tikal, 'place of the voices' in Itza Maya, is not the ancient name for the site but rather the name adopted shortly after its discovery in the 1840s. Hieroglyphic inscriptions at the ruins refer to the central area of the ancient city as Yax Mutal or Yax Mutul. The kingdom as a whole was simply called Mutal or Mutul, which is the reading of the "hair bundle" Emblem Glyph seen in the accompanying photo. Its meaning remains obscure, although some scholars think that it is the Hair knot of the Ahau or ruler.

It is believed that Tikal was first occupied as a small village in the Middle Formative Period (900–300 B.C.E.). It became an important ceremonial center during the Late Formative Period (300 B.C.E.– 100 C.E.). During this time construction on pyramids and temples was begun. It was not until the Late Classic Period (600–900 C.E.) that it rose as a dominate force, with the building of great plazas, pyramids, and palaces. It was also during this period that hieroglyphic writing and complex systems of time-counting appeared, accompanied by the flowering of Maya art as seen in monumental sculpture and vase painting.[1]

Tikal was a dominating influence during the Early Classic Period (100-600 C.E.), and an important post in a great trading network. Inscriptions tell of alliances and conflict with other Mayan states, including Uaxactun, Caracol, Dos Pilas, Naranjo, and Calakmul. It continued to flourish even after the decline of Teotihuacán, and reached its peak between 600 and 800.

The "Tikal hiatus" refers to a period between the late sixth to late seventh century where there was a lapse in the writing of inscriptions and large-scale construction at Tikal. This hiatus in activity at Tikal was long unexplained until later epigraphic decipherments identified that the period was prompted by Tikal's comprehensive defeat at the hands of the Caracol polity in 562 C.E. after six years of warfare against an alliance of Calakmul, Dos Pilas and Naranjo.

The hiatus at Tikal lasted until the ascension of Jasaw Chan K'awiil I (Ruler A) in 682 C.E. In 695, Yukno’m Yich’Aak K’ahk’ of Calakmul (Kanal), was defeated by the new ruler of Tikal, Jasaw Chan K'awiil I, Nu’n U Jol Chaak’s heir. This defeat of Calakmul restores Tikal’s preeminence in the Central Maya region, but never again in the southwest Petén, where Dos Pilas maintained its presence. Tikal, along with the other Maya centers of the southern lowlands, was abandoned by the tenth century.

The beginning of the Tikal hiatus has served as a marker by which archaeologists commonly sub-divide the Classic period of Mesoamerican chronology into the Early and Late Classic.[2]

The known rulers of Tikal, with general or specific dates attributed to them, include the following: 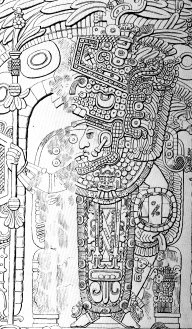 Note: English language names are provisional nicknames based on their identifying glyphs, where rulers' Maya language names have not yet been definitively deciphered phonetically. 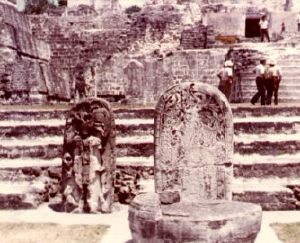 Two stelae on the North Acropolis in 1970.

As is often the case with huge ancient ruins, knowledge of the site was never completely lost in the region. Some second- or third-hand accounts of Tikal appeared in print beginning in the seventeenth century, continuing through the writings of John Lloyd Stephens in the early nineteenth century. Stephens and his illustrator, Frederick Catherwood, reported hearing rumors of a lost city, with white building tops towering above the jungle, during their 1839-40 travels in the region.

Due to the site's remoteness from modern towns, however, no explorers visited Tikal until Modesto Méndez and Ambrosio Tut visited it in 1848. Several other expeditions came to further investigate, map, and photograph Tikal in the nineteenth century (including Alfred P. Maudslay in 1881-82) and the early twentieth century.

In 1951 a small airstrip was built at the ruins, which previously could only be reached by several days travel through the jungle on foot or mule. From 1956 through 1970 major archaeological excavations were made by the University of Pennsylvania. In 1979 the Guatemalan government began a further archaeological project at Tikal, which continues to this day.

The ruins of Tikal sit in the heart of the Guatemalan jungle surrounded by lush vegetation. The ruins were declared a national monument in 1931, and in May 1955 the surrounding area was designated Tikal National Park. The park was declared a World Heritage Site in 1979 and a Biosphere Reserve in 1990. The reserve borders Mexico to the north and west, and is adjacent to the Calukmul Biosphere Reserve in Mexico. Its eastern boundary forms the frontier with Belize, while the southeast is bound by the Usumacinta River. The area exists in one of the most extensive wetlands in Central America.[3]

In addition to the ruins of the Mayan culture, the reserve protects a large area of tropical rainforest with a wide range of unspoiled natural habitat. However, it is considered by many as first and foremost an important historic and cultural site. Many mounds have been covered by a thick layer of jungle for over a thousand years and are thus well-preserved. The ceremonial center of the ruins contains temples and palaces, and public squares accessed by means of ramps. Remains of dwellings are scattered throughout the surrounding countryside. 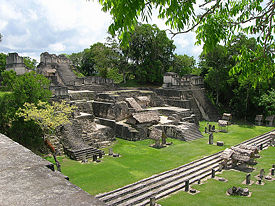 The ruins of Tikal lie on lowland rainforest. Conspicuous trees at the Tikal National Park include gigantic ceiba (Ceiba pentandra) the sacred tree of the Maya; tropical cedar (Cedrela odorata), and mahogany (Swietenia).

The largest of the Classic Maya cities, Tikal had no water source other than what was collected from rainwater and stored in underground storage facilities. Archaeologists working in Tikal during the last century utilized the ancient underground facilities to store water for their own use. The absence of springs, rivers, and lakes in the immediate vicinity of Tikal highlights a prodigious feat: building a major city with only supplies of stored seasonal rainfall. Tikal prospered with intensive agricultural techniques, which were far more advanced than the slash and burn methods originally theorized by archaeologists. The reliance on seasonal rainfall left Tikal vulnerable to prolonged drought, which is now thought to have played a major role in the Classic Maya Collapse. 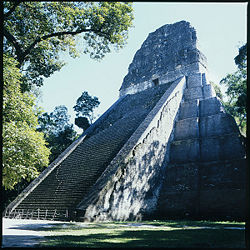 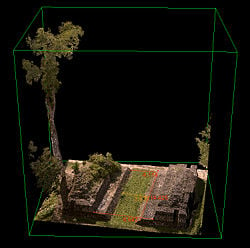 There are thousands of ancient structures at Tikal, with only a fraction of them having been excavated after decades of archaeological work. The most prominent surviving buildings include six very large Mesoamerican step pyramids, labeled Temples I - VI, each of which support a temple structure on their summits. Some of these pyramids are over 200 feet (60 meters high). They were numbered sequentially during the early survey of the site.

The majority of pyramids currently visible at Tikal were built during Tikal’s resurgence following the Tikal Hiatus (between the late seventh and the early ninth centuries). It should be noted, however, that the majority of these structures contain sub-structures that were initially built prior to the hiatus period.

Temple I (also known as the Temple of Ah Cacao or Temple of the Great Jaguar) was built around C.E. 695; Temple II or the Moon Temple in C.E. 702; and Temple III in C.E. 810. The largest structure at Tikal, Temple IV, is approximately 230 feet (70 meters) tall. Temple IV marks the reign of Yik’in Chan Kawil (Ruler B, the son of Ruler A or Jasaw Chan K'awiil I) and two carved wooden lintels over the doorway that leads into the temple on the pyramid’s summit record a long count date (9.15.10.0.0) that corresponds to C.E. 741 (Sharer 1994). Temple V dates to about C.E. 750, and is the only temple where no tomb has been found. Temple VI, also known as the Temple of the Inscriptions, was dedicated in C.E. 766.

The Lost World Pyramid (Str. 5C-54) is in the southwest portion of Tikal’s central core and west of Temple V. A 30 meter high "True Pyramid," with stairways in three sides and stucco masks, dating to the Late Preclassic, this pyramid is part of an enclosed complex of structures that remained intact through, and un-impacted by, later building activity at Tikal.

The ancient city also has the remains of royal palaces, in addition to a number of smaller pyramids, palaces, residences, and inscribed stone monuments. There is even a building which seemed to have been a jail, originally with wooden bars across the windows and doors. There are also seven courts for playing the Mesoamerican ballgame, including a set of three in the "Seven Temples Plaza" a unique feature in Mesoamerica.

The residential area of Tikal covers an estimated 23 square miles (60 sq km), much of which has not yet been cleared, mapped, or excavated. A huge set of earthworks has been discovered ringing Tikal with a six meter wide trench behind a rampart. Only some nine km of it has been mapped; it may have enclosed an area of some 125 square kilometers. Population estimates place the demographic size of the site between 100,000 and 200,000.

Recently, a project exploring the earthworks has shown that the scale of the earthworks is highly variable and that in many places it is inconsequential as a defensive feature. In addition, some parts of the earthwork were integrated into a canal system. The earthwork of Tikal varies significantly in coverage from what was originally proposed and it is much more complex and multifaceted than originally thought.

Retrieved from https://www.newworldencyclopedia.org/p/index.php?title=Tikal&oldid=1033712
Categories:
Hidden category:
This page was last edited on 13 March 2020, at 03:38.
Content is available under Creative Commons Attribution/Share-Alike License; additional terms may apply. See Terms of Use for details.