Odd-toed ungulate is the common name for any of the hoofed, herbivorous, terrestrial mammals comprising the order Perissodactyla, characterized by a pulley-like groove in the proximal surface of the astragalus (a bone in the ankle joint) and an odd number of functional toes (one or three), with the axis of each limb going through the enlarged middle (third) toe. Perissodactyls include such well-known members as horses, zebras, tapirs, and rhinoceroses. Perissodactyla is one of two living orders of ungulates (hoofed mammals), the other being Artiodactyla, the even-toed ungulates, which have a double-pulley astragalus and an even number (two or four) of functional toes.

The extant odd-toed ungulates are usually large, have relatively simple stomachs, and are exclusively herbivorous. In contrast to the ruminant Artiodactyl ungulates, perissodactyls are hindgut fermenters; that is, they digest plant cellulose in their intestines rather than in the first chamber (rumen) of the stomach.

Perissodactyls play key roles ecologically, commercially, and culturally. Ecologically, they provide a function in terrestrial food chains, although the large size and speed of the adults of many species, and the bristly manes of tapirs and horns of rhinoceroses, make them difficult prey as adults for all but the largest predators. Commercially and culturally, the domestication of some species, notably the horse and donkey, has been of great importance for human mobility, warfare, and transportation. Tapirs also are a popular food source and sought for sports hunting as well, and their skins provide leather. Rhinos are harvested, illegally, for their horns and other body parts for traditional Asian medicine. With the exception of the domesticated species, most perissodactyls are threatened with extinction.

The hoofed mammals, or ungulates, are divided into two living orders, Perissodactyla, the odd-toed ungulates, and Artiodactyla, the even-toed ungulates. These two groups are prominently distinguished by the feet, as evident from the origin of the names—Perissodactyla comes from the Greek perissos, meaning "odd" and dactylos, meaning finger or toe, and Artiodactyla comes from the Greek artios, meaning "even numbered" or "entire" and dactylos (Shackleton and Harestad 2004). In addition, the artiodactylas are characterized by a double-pulley astragalus and the perissodactylas have a single pulley astragulus. The astragalus is a tarsal (ankle) bone in the hind limb. In artiodactylas it has deeply arched grooves where it articulates with the limb bones on either side (grooved joints) (Shackleton and Harestad 2004). In perissodactyls, there is a deep pulley-like groove in the proximal surface of the astralagus, which limits the limbs to forward and backward movements (Cerveny 2004).

Perissodactyls are characterized by their single functional toe, or three functional toes together, bearing the weight of the animals, with the axis of the limbs passing through the middle digit, which is enlarged. (This would be the third digit according to the five-toed ancestral plan.) Members of the family Equidae (horses, zebras, etc.) have one functional toe. Members of the Rhinocerotidae (rhinoceroses) have three digits on all four feet. Members of the Tapiridae (tapirs) have three digits on the hind feet, but four digits on the forefeet. All perissodactyls, extinct and extant, have this mesaxonic foot structure, meaning the symmetry of the foot passes through the third digit. Unlike the artiodactylas, the median metacarpals and metatarsal bones in the feet are not fused into a cannon bone (Cerveny 2004).

All perissodactyls are hindgut fermenters. Hindgut fermenters, in contrast to the ruminants, store digested food that has left the stomach in a pouch-like extension of the large intestine called the caecum (literally "cave"), where the food is digested by bacteria. Food passes through the stomach twice as fast as the ruminant foregut fermenters and digestion is less efficient: the efficiency of digestion of the horse is only about seventy percent of that of cattle. Thus, perissodactyls consume more food per unit of weight than ruminants within the even-toed ungulates (Cerveny 2004).

The living perissodactyls are a diverse group, with no generalized appearance. At one extreme are the lithe and graceful horses; on another, the huge, tank-like rhinoceroses; and in the middle, the vaguely pig-like tapirs. All extant perissodactyls are large, from the mountain tapir, which reaches 200 kilograms (485 pounds) to the white rhinoceros, which reaches to over 3500 kilograms (7,700 pounds) (Cerveny 2004).

Extinct perissodactyls possessed a far more diverse range of forms, including the tiny, vaguely tapir-like paleotheres, the monstrous brontotheres, the knuckle-walking chalicotheres, and the gigantic rhinoceros Indricotherium, which dwarfed even elephants.

Perissodactyls are limited to Africa, Asia, and the Americas. They were more widespread just a few hundred years ago, including in Europe, but the wild horses became extinct on that continent in the nineteenth century. They occupy a wide diversity of habitats, including deserts, rainforest, grasslands, and scrublnds (Cerveny 2004).

Today, the equines are the only social perissodactyls still extant. Horses organize themselves into small bands with a dominant mare at the top of the pecking order, as well as a resident stallion. Several bands will share a common territory, with some members of one band joining another band, every so often. These bands, in turn, form a "herd." Huge fossil beds made of the bones of hundreds or thousands of individuals suggest that many of the larger brontothere species, and some prehistoric rhinoceroses, such as Diceratherium were also social animals, which organized themselves into herds. Modern-day rhinoceroses, on the other hand, are solitary animals that maintain territories, often attacking members of their own species when their space has been invaded. Tapirs, too, are solitary animals, though they are shy, retiring creatures, which do not defend or maintain territories. 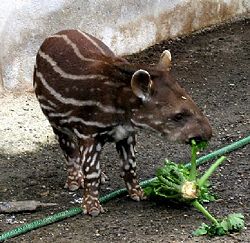 Perissodatyls are slow breeders, with a low reproductive rate. Perissodactyls tend to have one foal or calf at a time. Very rarely, the female may have twins. Gestation is very long, from about 11 months in horses to 16 months for rhinoceroses. The calf or foal is capable of standing within moments of birth, but is very dependent on its mother. The young stays with its mother even after weaned, usually until it is chased off by the mother upon the birth of a new foal or calf. At this time, in horses, the foal will enter into the herd proper, while young stallions are often chased off and join bachelor herds. With rhinos and tapirs, the newly weaned calf wanders away to search for new feeding grounds.

As with the males of many other animal groups, male perissodactyls often spar with each other for the privilege to mate with receptive females. A male which has found a female will attempt to taste her urine in order to see if she is in estrus. The female may also signal that she is in estrus, such as the whistling of cow Indian rhinoceroses and tapirs.

Humans have a historically long interaction with perissodactyls. The wild ass was the first equid to be domesticated, around 5000 B.C.E. in Egypt. Horses were domesticated 1000 years later, in the late neolithic. The original purpose of domesticating the horse may have been for food, but about 4,000 years ago they became a means of transport, a development that caused a revolution in human mobility and in warfare (Cerveny 2004). During the sixteenth century, the Spaniards brought horses with them, and inadvertently reintroduced horses back into North America. While no rhinoceros has been domesticated, they have been captured for zoos and menageries since ancient times. The zebroid, that is, a zebra hybrid, began appearing in zoos and menageries during the nineteenth century.

In addition, wild species of perissodactyls have great importance as food and the skins of tapirs are used to provide good quality leather. Rhinoceroses are illegally hunted for horns and other body parts that are used in traditional Asian medicine (Cerveny 2004). 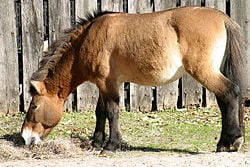 The Przewalski's horse, one of the most endangered equids

The odd-toed ungulates have been among the most important herbivorous mammals. At times, they have been the dominant herbivores in many ecosystems. However, over the course of millions of years, many species went extinct due to climatic change, newer, coarser-leaved plants, predators, disease, and competition from other herbivores, particularly the artiodactyls. The Chalicotheriidae was the most recent family of perissodactyl to become entirely extinct. The perissodactyls' decline continues even today. Most species are listed as threatened species, and although no species are confirmed to be extinct, some subspecies have gone extinct. The quagga was hunted for its meat, the tarpan were hunted for sport, and a subspecies of black rhinoceros was hunted for its horn (as with all other African rhinoceros species).

Perissodactyls tend to do well in captivity, and there are many breeding programs in place to help replenish wild populations. The Przewalski's horse has been recently released back to the wild. Some of the captive breeding programs for some equids are unusual, in that breeders have been carefully selecting specimens in order to recreate various recently extinct equids, such as the tarpan and quagga. Most wild rhinoceroses are monitored, and some have their horns trimmed off in order to discourage horn-poachers. Even so, if conservations do not improve, it may very well be that the only living perissodactyls left will be the domesticated horse and donkey.

Although no certain records are known prior to the early Eocene, the odd-toed ungulates probably arose in what is now Asia during the late Paleocene, less than 10 million years after the Cretaceous-Tertiary extinction event, in which the dinosaurs (and all other large animals) died out (Hooker 2005). By the start of the Eocene (55 million years ago), they had diversified and spread out to occupy several continents. The horses and tapirs both arose in North America (Savage and Long 1986), and the rhinoceroses appear to have developed in Asia from tapir-like animals and then recolonized the Americas during the middle Eocene (about 45 million years ago). About 15 families have been recognized, of which only three survive (McKenna and Bell 1997; Hooker 2005). These 15 families were very diverse in form and size; they included the enormous brontotheres and the bizarre chalicotheres. The largest perissodactyl, an Asian rhinoceros called Paraceratherium, reached 11 metric tons (12 short tons), more than twice the weight of an elephant.

Perissodactyls were the dominant group of large terrestrial browsers right through the Oligocene. However, the rise of grasses in the Miocene (about 20 million years ago) saw a major change: the even-toed ungulates soon rose to prominence, which is probably a function of their more complex stomachs, which were better able to adapt to a coarse, low-nutrition diet. Nevertheless, many odd-toed species survived and prospered until the late Pleistocene (about 10,000 years ago) when they faced the pressure of human hunting and habitat change.

The members of the order fall into two suborders:

The three surviving families of odd-toed ungulate are classified as follows.

It was thought that odd-toed ungulates are closely related to even-toed ungulates. But recent molecular comparisons show that even-toed and odd-toed ungulates may not form a clade. Instead, perissodactyls may be more closely related to carnivorans, bats, and pangolins (and, by default, the Creodonts and Cimolestids). So, some biologists group the orders Perissodactyla, Carnivora, Chiroptera, Pholidota, Creodonta, and Cimolesta as the clade Pegasoferae (Nishihara et al. 2006; see Matthee et al. 2007 and Springer et al. 2007 for alternate views).