Most "wild" horses today, such as the American mustang or the Australian brumby, are actually feral animals, horses that were once domesticated but escaped and reverted to an apparently wild status. Przewalski's horse, on the other hand, has never been successfully domesticated and remains a truly wild animal today. The tarpan, Equus ferus ferus, was also a wild horse, but became extinct in the early twentieth century.

At one point, Przewalski's horse was extinct in the wild, but in the 1990s was reintroduced into the Mongolian steppe from zoos and is now considered endangered in the wild. As a result of its preservation and reintroduction, this unique animal will be able to be appreciated and studied by future generations.

Przewalski's horse is one of ten living members of the Equus genus, a taxon that also includes domestic horses, zebras, donkeys, and onagers. All of the living members of the Equidae family are in the Equus genus. Extant equids are medium to large ungulate mammals, with long heads, and necks with a mane. Their legs are slender and end in a single, unguligrade toe, protected by a horny hoof. They have long, slender, tails, either ending in a tuft, or entirely covered in flowing hair. The pinnae ("ears") of equids are mobile, enabling them to easily localize the origin of sounds. They have two-color, or dichromatic vision. Their eyes are set back far on the head, giving them a wide angle of view, without entirely losing binocular vision. Equids also have a vomeronasal organ, that allows males to use the flehmen, or "lip-curling" response to assess the sexual state of potential mates.

Equids are herbivores, and feed predominantly on tough, fibrous food, such as grasses and sedges. When in need, they will also eat other vegetable matter, such as leaves, fruits, or bark, but are normally grazers, not browsers. Unlike ruminants, with their complex stomachs, equids break down cellulose in the "hindgut" or cecum, a part of the colon. 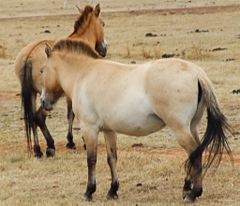 Przewalski's horses. The animal on the left shows the dorsal stripe along its spine, the one on the right shows faint horizontal "zebra" striping on the back of its legs by the knee (click image to enlarge), both classic examples of "primitive" dun markings

Przewalski's horse is stockily built in comparison to domesticated horses, with shorter legs. It has a large head. Typical height is about 13 hands (1.32 meters), length is about 2.1 meters with a 90 centimeter tail. They weigh between 550 and 750 pounds (250 to 340 kilograms). The coat ranges from brown to the dun coloration (sandy yellow to reddish-brown) of domestic horses. It is dark brown around the mane (which stands erect) and yellowish-white on the belly. There is a dark stripe down the middle of the back and the legs are often faintly striped (NZP). In the wild, Przewalski's horses live in social groups consisting of a dominant stallion, a dominant lead mare, other mares, and their offspring. The patterns of their daily lives exhibit horse behavior similar to that of feral horse herds: Each group has a well-defined home range; within the range, the herd travels between three and six miles a day, spending time grazing, drinking, using salt licks, and dozing. At night, the herd clusters and sleeps for about four hours. Ranges of different herds may overlap without conflict, as the stallions are more protective of their mares than their territory.

Stallions practice a form of scent marking and will establish piles of dung at intervals along routes they normally travel to warn other males of their presence. In addition, when a female in the herd urinates, the stallion will frequently urinate in the same place, to signal her membership in the herd to other males. The stallions can frequently be seen sniffing dung piles to confirm scent markings (King and Gurnell 2006).

In the fifteenth century, Johann Schiltberger recorded one of the first European sightings of the horses in the journal of his trip to Mongolia as a prisoner of the Mongol Khan (DAS 1998). The horse is named after Russian General Nikolai Przhevalsky (1839–1888) (the spelling of the horse breed as "Przewalski" derives from the Polish spelling of the name). He was an explorer and naturalist who described the horse in 1881, after having gone on an expedition to find it, based on rumors of its existence. Many of these horses were captured around 1900 by Carl Hagenbeck and placed in zoos. 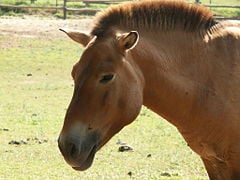 The native population declined in the 20th century due to a combination of factors, with the wild population in Mongolia dying out in the 1960s. The last herd was sighted in 1967 and the last individual horse in 1969. Expeditions after this failed to locate any horses, and the species was designated "extinct in the wild" for over 30 years.

After 1945, only two captive populations in zoos remained: in Munich and in Prague Zoo. The most valuable group in Askania Nova reserve in the Ukraine was shot down by German soldiers during occupation and the group in the United States had died. 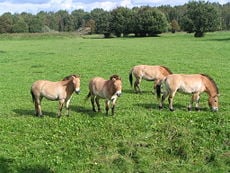 In 1977, the Foundation for the Preservation and Protection of the Przewalski Horse was founded by Jan and Inge Bouman, which started a program of exchange between captive populations in zoos throughout the world to reduce inbreeding, and later starting a breeding program of its own.

In 1992, a cooperative venture between the Zoological Society of London and Mongolian scientists resulted in successful reintroduction of these horses from zoos into their natural habitat in Mongolia. Sixteen horses first were released into the wild in Mongolia, followed by additional animals later on. These reintroduced horses successfully reproduced and the status of the animal was considered to have changed from "extinct in the wild" to "endangered" in 2005 (ZSL 2006). However, they are classified as "extinct in the wild" by the IUCN Red List, as they have not been reassessed since 1996 (ESG 1996). The area to which they were reintroduced became Khustain Nuruu National Park in 1998.

While dozens of zoos worldwide have Przewalski's Horses in small numbers, there are also specialized reserves dedicated primarily to the species.

The world's largest captive breeding program for Przewalski's horses is at the Askania Nova preserve in Ukraine. Several dozen Przewalski's horses were also released in the area evacuated after the Chernobyl accident, which now serves as a deserted de facto natural preserve (Mulvey 2006). An intensely researched population of free-ranging animals was introduced to the Hortobágy puszta in Hungary; data on social structure, behavior, and diseases gathered from these animals is used to improve the Mongolian conservation effort.

Three animals from this program live in a 12 acre (5 hectare) paddock in the Clocaenog Forest in North Wales, UK, on the site of a former Neolithic or Iron Age settlement. They were introduced there in 2004. The Forestry Commission hopes they will help recreate scenes from the Iron Age when horses similar to these roamed Britain freely, with Przewalski's horse believed to have roamed Britain three to 4,000 years ago, as evidenced from cave paintings (FC 2004).

Another herd exists at The Wilds Wildlife Preserve in Cumberland, Ohio, USA. The small herd of about 17 individuals is kept in a large area shared with other Asian animals. A small population is also kept by the Smithsonian Institution at a facility near Front Royal, Virginia and in the Smithsonian National Zoological Park in Washington, DC.

Recent advances in equine reproductive science have potential to further preserve and expand the gene pool. In October, 2007 scientists at the Smithsonian Institution's National Zoo successfully reversed a vasectomy on a Przewalski horse—the first operation of its kind on this species and possibly the first ever on any endangered species. While normally a vasectomy may be performed on an endangered animal under limited circumstances, particularly if an individual has already produced many offspring and its genes are overrepresented in the population, scientists realized the animal in question was one of the most genetically valuable Przewalski horses in the North American breeding program (AP 2008).