The genus Rhinoceros of the family Rhinocerotidae includes the one-horned rhinoceroses, of which there are two extant species: the Indian rhinoceros (R. unicornis) and the Javan rhinoceros (R. sondaicus). These are characterized by one horn (actually thickly matted hair) on the upper snout.

The Javan rhinoceros is one of the rarest and most endangered large mammals in the world with perhaps only 60 individuals surviving, in only two known locations: Java (Indonesia) and Vietnam. The reason for its decline is largely attributed to anthropogenic effects, principally hunting them for their horns, which are valued in traditional Chinese medicine, as well as loss of habitat, including as a result of war. Efforts are now underway to protect the remaining individuals and rebuild the two populations.

The Indian rhino also once had a much larger population and range but in the nineteenth and early twentieth century was hunted relentlessly. However, this species has been a major success of conservation, growing in population from just 100 animals in the early 1900s to about 2,500 animals today. Even so, the species is still endangered and also is illegally poached for its horn and faces the threat of loss of habitat.

The Rhinoceros genus is one of four extant genera of rhinoceroses in the rhinoceros family (Rhinocerotidae), the others being Ceratotherium (white rhinocerosis, C. simum), Diceros (black rhinoceros, Diceros bicornis), and Dicerorhinus (Sumatran rhinoceros, Dicerorhinus sumatrensis). All extant rhinoceroses are large, thick-skinned herbivores, with three functional toes on each foot (they are odd-toed ungulates), and either one or two horns on the upper snout. Members of the Rhinoceros genus are characterized by just one horn on the upper snout, while the other extant genera are represented by species with two horns, although one of the Sumatran rhino's horns typically is a stub. These projections are not true horns, but rather are epidermal derivatives, composed of a solid mass of thickly matted hair that grows from the skull without skeletal support.

The one-horned rhinoceros is a solitary animal; however they tend to congregate in bathing pools and feeding areas. Indian rhinos are highly vocal animals and produce a variety of sounds. The Javan rhino is much less vocal than the Sumatran; very few Javan rhino vocalizations have ever been recorded. It should be noted, however, that the risks of interfering with such a critically endangered species as the Javan rhino has lead to its being primarily studied through indirect means, such as fecal sampling and camera traps, and members of this species are rarely encountered, observed, or measured directly.

The Indian and Javan rhinoceros first appear in the fossil record in Asia around 1.6 million to 3.3 million years ago. Molecular estimates, however, suggest the species may have diverged much earlier, around 11.7 million years ago (Rougard et al. 2001; Xu et al. 1996). Although belonging to the type genus, the Indian and Javan rhinoceros are not believed to be closely related to other rhino species. Different studies have hypothesized that they may be closely related to the extinct Gaindetherium or Punjabitherium. A detailed cladistic analysis of the Rhinocerotidae placed Rhinoceros and the extinct Punjabitherium in a clade with Dicerorhinus, the Sumatran rhino. Other studies have suggested the Sumatran rhinoceros is more closely related to the two African species (Cerdeño 1995). The Sumatran Rhino may have diverged from the other Asian rhinos as far back as 15 million years ago (Lacombat 2005; Dinerstein 2003).

Fossils of Rhinoceros unicornis appear in the Middle Pleistocene. In the Pleistocene (1,808,000 to 11,550 years BP), the Rhinoceros genus ranged throughout Southeast Asia and South Asia, with specimens located on Sri Lanka. Into the Holocene, some rhinoceros lived as far west as Gujarat and Pakistan until as recently as 3,200 years ago (Laurie et al. 1983).

The Indian rhinoceros (Rhinoceros unicornis) is found in Nepal, Bhutan, Pakistan and in Assam, India, in tall grasslands and forests in the foothills of the Himalayas. Also known as the great one-horned rhinoceros and the Asian one-horned rhinoceros, it is very large, almost equal in size to the white rhino. Fully grown males can weigh from 2200 to 3000 kilograms (4,800-6,600 pounds) and females can weigh about 1600 kilograms (3,500 pounds). The Indian rhino ranges from 1.7 to 2 meters tall (5.7-6.7 feet) and can be up to four meters (13 feet) long.

The Indian rhino has thick, silver-brown skin, which becomes pinkish near the large skin folds that cover its body. Males develop thick neck-folds. The upper legs and shoulders are covered in wart-like bumps. It has very little body hair, aside from eyelashes, ear-fringes and tail-brush (Laurie et al. 1983).

The single horn of the great one-horned rhinoceros curves backward from the nose and is present in both males and females, but not on newborn young. The horn, like human fingernails, is pure keratin and starts to show after about six years. In most adults the horn reaches a length of about 25 centimeters (9.8 inches) (Dinerstein 2003), but have been recorded up to 57.2 centimeters (22.5 inches) in length. The horn is naturally black. 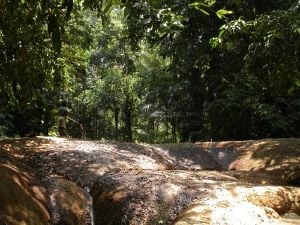 Java's Ujung Kulon National Park is the home of most remaining Javan rhinos.

The Javan rhinoceros (R. sondaicus) is found in the wild only in a national park on the island of Java in Indonesia and in a national park in Vietnam. Also known as the Sunda rhinoceros and the lesser one-horned rhinoceros, it is smaller than the Indian rhinoceros (or greater one-horned rhinoceros) and closer in size to the black rhinoceros. The body length of the Javan rhino (including its head) can be up to 3.1 to 3.2 meters (10–10.5 feet), and it can reach a height of 1.4 to 1.7 meters (4.6–5.8 feet). Adults are variously reported to weigh between 900 and 2,300 kilograms (2,000-5,100 pounds), although because they are endangered, a study to collect accurate measurements of the animals has never been conducted and is not a priority (Dinerstein 2003). There is not a substantial size difference between genders, but females may be slightly bigger. The rhinos in Vietnam appear to be significantly smaller than those in Java, based on studies of photographic evidence and measurements of their footprints (van Strien 2005).

The Javan rhino has hairless, splotchy gray or gray-brown skin, which falls in folds to the shoulder, back and rump. The skin has a natural mosaic pattern, which lends the rhino an armored appearance. The neck folds of the Javan rhinoceros are smaller than those of the Indian rhinoceros, but still form a saddle shape over the shoulder.

Like its Indian cousin, the Javan rhinoceros has a single horn. Its horn is the smallest of all extant rhinos, usually less than 20 centimeters (7.9 inches) with the longest recorded only 27 centimeters (10.5 inches).

Once the most widespread of Asian rhinoceroses, the Javan rhinoceros ranged from the islands of Indonesia, throughout Southeast Asia, and into India and China. The species is now Critically Endangered, with only two known populations in the wild, and none in zoos. It is possibly the rarest large mammal on earth (Dinerstein 2003). A population of at least 40–50 live in Ujung Kulon National Park on the island of Java in Indonesia and a small population, estimated in 2007 to be no more than eight, survives in Cat Tien National Park in Vietnam. The decline of the Javan Rhinoceros is attributed to poaching, primarily for their horns, which are highly-valued in traditional Chinese medicine, fetching as much as $30,000 per kilogram on the black market (Dinerstein 2003). Loss of habitat also is an important factor.