Lusaka is the capital and largest city of Zambia, as well as its chief administrative, financial, and commercial center. Located in the south-central part of the nation, it is a sprawling city located in a productive farming area. The name Lusaka derives from a Lenje village once located on the site, that was named after the village's leader, Chief Lusaka.

The four main highways of Zambia; the Great North Road to Tanzania, Livingstone Road to the south, the Great East Road to Malawi, and the Great West Road, radiate from its center. The Tazara Railway (also known as the Great Uhuru or Tanzam Railway) connects Lusaka and Dar es Salaam, Tanzania, providing landlocked Zambia seaport access to trans-oceanic trade.

Once a village, a railway link constructed in 1905 as part of Cecil Rhodes' Cape to Cairo Railway enabled Lusaka to develop as a collecting point for corn and tobacco from surrounding farmlands. The city's main growth occurred after 1935, when it became the capital of the British colony of Northern Rhodesia. Upon independence in 1964, it became the capital of Zambia. The city and its surrounding area became a province in 1976.

Beginning in the latter half of the twentieth century, Lusaka became a common meeting point for historic regional and international conventions which have resulted in policies or initiatives set to improve life in various respects for citizens of African nations. These significant events have earned the city the moniker of Africa's "City of Peace."

The city is located in the southern part of the central plateau of Zambia, consisting of flat grassland that supports farms, at an elevation of 4198 feet (1280 meters).

Lusaka has a superb climate, with warm sunny summers, interspersed with cooling thunderstorms and mild winters with ample sunshine. The average maximum daytime temperature in January is 79°F (26°C), dropping to an average maximum of around 73°F (23°C) in July. It can get hot between October and March if there’s no rain. Average annual precipitation is 33 inches (836mm).

Originally planned as a garden city, Lusaka has become a sprawling metropolis with many multi-storey buildings, high-walled suburbs and busy shanty towns. Areas originally planned for greenery were built up as the city's need for expansion grew.

Cairo Road is the city's main thoroughfare and the principal business, retail, and services center of the city. It was a section of the Great North Road and was so named because it was a link in Cecil Rhodes' dream of a Cape to Cairo Road through British colonies in Africa. The city center includes several blocks west of Cairo Road, around which lie the New City Market and Kamwala Market, a major shopping area, as well as the Zintu Community Museum. Further east lies the government area, including the State House and the various ministries.

A street in Lusaka. 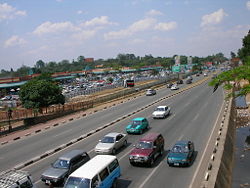 The Great East Road, with Manda Hill Shopping Centre in the background.

The area of modern Zambia was inhabited by Khoisan hunter-gatherers until around 300 C.E., when more technologically-advanced migrating tribes began to displace or absorb them.[3] In the 12th century, waves of Bantu-speaking immigrants arrived. In the early eighteenth century, the Nsokolo people settled in the Mbala district of Northern province. During the nineteenth century, the Ngoni peoples arrived from the south.

The earliest European to visit was Portuguese explorer Francisco de Lacerda (died 1798) in the late eighteenth century, followed by other explorers in the nineteenth century, including Scottish Congregationalist pioneer medical missionary David Livingstone (1813–1873) the first European to see the magnificent waterfalls on the Zambezi River in 1855, naming them Victoria Falls.

Northern Rhodesia was colonized in the 1890s by the British South Africa Company, a business group that received a charter from the government of Britain in 1888, granting the company and its leader, Cecil Rhodes (1853–1902), permission to colonize the areas north of the Limpopo River on behalf of Britain.

At that time, the British South Africa Company took over the area in which Lusaka is situated from the local chiefs.

The area was expanded by European (mainly British) settlers in 1905 with the building of the railway. Control passed to the British Colonial Office in 1924.

In 1935, due to its fairly central location, its situation on the railway and at the crossroads of the Great North Road and Great East Road, it was chosen to replace Livingstone as the capital of the British colony of Northern Rhodesia.

After the federation of Northern and Southern Rhodesia in 1953, it was a center of the independence movement among some of the educated elite that led to the creation of the Republic of Zambia. In 1964, Lusaka became the capital of the newly independent Zambia.

In the 1980s and 1990s, declining copper prices and a prolonged drought hurt the economy.

In the 2001 election, three parties filed a legal petition challenging the election of ruling party candidate Levy Mwanawasa. The new president launched an investigation in 2002 to probe high-level corruption during the previous administration. In 2006-2007, this task force successfully prosecuted four cases, including a landmark civil case in the United Kingdom in which former President Chilubga and numerous others were found liable for US$41-million.

Mwanawasa was re-elected in 2006 in an election that was deemed free and fair. Upon his abrupt death in August 2008, he was succeeded by his vice-president Rupiah Banda, who subsequently won a special presidential election in October 2008. 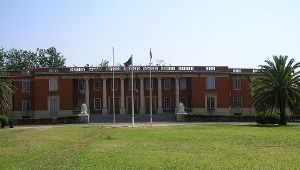 As national capital, Lusaka is the seat of the legislative, executive and judicial branches of government, epitomized by the presence there of the National Assembly (parliament), State House (office of the President), and the High Court.

The city is also capital of Lusaka Province, the smallest and second most populous of the country's nine provinces, and forms an administrative district run by Lusaka City Council.

Lusaka has served as host city to several important regional and international conventions that resulted in policies or initiatives set to improve life in various respects for citizens of African nations. These significant events have earned the city the moniker of Africa's "City of Peace".[4] These events have included:

In addition, in September 1999 Lusaka hosted the 11th International Conference on AIDS and STIs in Africa (ICASA). Prime Ministers, Vice Presidents, and Ministers of Health from Burkina Faso, Lesotho, Malawi, Mozambique, the Republic of Congo, South Africa, Swaziland, Tanzania, Zambia and Zimbabwe, officially recognized HIV/AIDS as national disasters in their nations. The conference resulted in a commitment to put into place institutional frameworks that would curtail the spread of these diseases.[6] 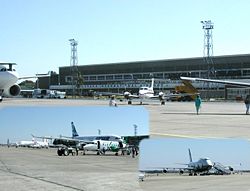 The Zambian economy relies heavily on the country’s mineral wealth, particularly copper and also cobalt and zinc. These account for the bulk of export earnings and provide essential raw materials for Zambia’s manufacturing industry, which accounts for over one-third of national output.

Zambia's economy has shown real GDP growth in 2005-2008 about six percent per year. Privatization of government-owned copper mines in the 1990s relieved the government from covering mammoth losses generated by the industry.

In 2005, Zambia qualified for approximately $6-billion in debt relief.

Per capita GDP was estimated at $1500 in 2008. The unemployment rate was estimated at 50 percent in 2000. Well over 60 percent of Lusaka's million inhabitants are unemployed, but there are few beggars. Although petty theft occurs, most try to make an honest living selling their wares or services.

Lusaka developed as a collecting point for corn and tobacco. Other products of the surrounding area include beef, hides, and dairy products. The city has a mixed economy that includes production of cement, textiles, and shoes, as well as food processing.

Zambia's four main highways radiate from Lusaka. These are the Great North Road (to Tanzania), Livingstone Road, Great East Road (to Malawi), and the Great West Road. The city has railway connections to Livingstone, Ndola, and Tanzania.

The Lusaka International Airport is the hub of Zambian Airways, and is used as a public and military airport. There is also an old airport nearer to the center of the city that is no longer used by civilians. 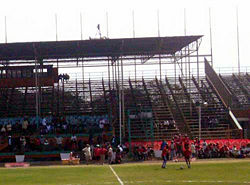 Lusaka had a population of 1,084,703 in 2000 census, and was considered one of the fastest growing (in terms of population) cities in Africa. Its population nearly tripled in the immediate post-independence era.

Most (98.7 percent) of Zambia's population comprises about 72 Bantu-speaking ethnic groups. Almost 90 percent of Zambians belong to the eight main ethnolinguistic groups, which are the Bemba, Nyanja-Chewa, Tonga, Lunda, Luvale, Kaonde, Nkoya, and Lozi. Europeans make up 1.1 percent, and others 0.2 percent. Lusaka is home to a diverse community of foreigners, many of whom work in the aid industry as well as diplomats, representatives of religious organizations and some business people.

English is the official language. The major vernaculars are Bemba, Kaonda, Lozi, Lunda, Luvale, Nyanja, Tonga, and about 70 other indigenous languages.

The country is 85 percent Christian, with Catholicism being in the majority. Anglicans, Methodists, Baptists, and Seventh Day Adventists all have established a presence as well. While Zambia is predominantly a Christian country, few have totally abandoned all aspects of their traditional beliefs. Zambia has a very small Jewish community, composed mostly of white Ashkenazi. Muslim, Hindu and Bahá'í citizens together represent about two percent of the population.

The University of Zambia in Lusaka is the primary institution of higher learning. It was founded in 1966 and has a student population of about 6000. 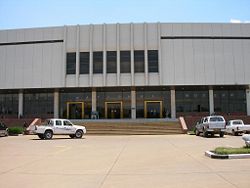 Attractions include Lusaka National Museum, the Political Museum, the Zintu Community Museum, the Freedom Statue, the Zambian National Assembly, the Agricultural Society Showgrounds (known for their annual agricultural show), the Moore Pottery Factory, the Lusaka Playhouse Theatre, a cinema, the Cathedral of the Holy Cross, a cenotaph, a golf club, the Lusaka Central Sports Club, and the zoo and botanical gardens of the Munda Wanga Environmental Park.

Although poverty continues to be a significant problem in Zambia with nearly 80 percent of the population living below the poverty line,[7] its economy has strengthened in the early twenty-first century, featuring single-digit inflation, a relatively stable currency, decreasing interest rates, and increasing levels of trade.[8]

As the capital and largest city, Lusaka's situation reflects that of her nation. There are programs in place (such as the SOS Social Centre) in Lusaka which work to alleviate the short term impact and effects of poverty and disease, as well as to provide empowerment programs meant to provide long-term solutions to these problems.[9]

The city also faces a large environmental challenge resulting from its rapid growth without consideration for water supplies and disposal of human waste. There has been no influx control and the city is bursting at the seams. Grossly inadequate municipal facilities are hard-pressed to cope with the ever-increasing demand.

In an attempt to alleviate the problems associated with its uncontained growth, Lusaka was undergoing a facelift in the opening decade of the twenty-first century. The building of new markets, a multi-million dollar shopping mall, fast food outlets, new double carriageway roads, and the refurbishing of old buildings were taking place, along with transformation of the city's parks.