Gaborone is the capital and largest city of the landlocked nation of Botswana, in Southern Africa. It serves as the administrative capital of Botswana's South-East district. Botswana is considered one of the most economically and politically stable nations on the African continent.

Gaborone lies in a flat valley between Kgale and Oodi Hills, on the Notwane River in southeastern Botswana, about 9 miles (15 kilometers) from the South African border.

Gaborone was founded in 1965, as the capital of Botswana. It is notable that the entire center of the city was constructed within three years. Formerly the British protectorate of Bechuanaland, on September 30, 1966, the country became independent within the Commonwealth of nations. Following its independence, Botswana has maintained one of the world's highest economic growth rates.

Before 1969, the name of the city was Gaberones, following the early practice of referring to African tribal capitals by the name of the chief, in this case Chief Kgosi Gaborone of the BaTlokwa. The old Gaberones became a suburb of the new Gaborone.

Gaborone lies in the flat valley between Kgale and Oodi Hills, on the Notwane River in the southeastern corner of Botswana, and 15 kilometers (9.3 mi) from the South African border, at an elevation of 2,953 feet (900 meters).

Gaborone has a semi-arid climate which is hot and dry for most of the year. There is little distinction between average summer and winter temperatures, although in winter months it can be chilly at night. Summers are hot with high humidity in the mornings. The average maximum daytime temperature in January is 89.6°F (32°C), dropping to an average maximum of around 73.4°F (23°C) in July. Rain is erratic, but falls mostly in summer in heavy localized downpours. Mean annual precipitation is 20.5 inches (523 mm).

Gaborone was planned as a small town, and its rapid development has necessitated construction of a larger dam to provide an adequate water supply.

A railway line divides the city into two. Suburbs in Gaborone include Broadhurst, Gaborone West, The Village, and Naledi. Phakalane, which is located outside the city's boundaries, has five-star hotels, good restaurants, and a buzzing night life.

The modernist downtown area comprising buildings of glass, steel and bricks, is surrounded by a less-planned lower-rise development. The city is surrounded by villages—Ramotswa to the southeast, Mogoditshane to the northwest, Mochudi to the east, and Tlokweng. Numerous people live in these villages and work in Gaborone. 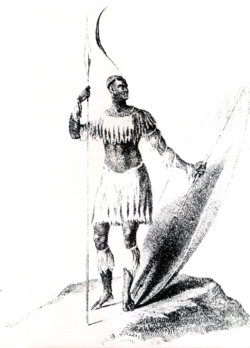 Shaka, king of the Zulu. After a sketch by Lt. James King, a Port Natal merchant.

The original inhabitants of southern Africa were the Bushmen (San) and Khoe peoples, who speak click languages and lived as hunters-gatherers. About 1,000 years ago, large chiefdoms emerged, to be eclipsed by the Great Zimbabwe Empire, which spread into eastern Botswana. Around 1300, peoples in present-day Transvaal began to coalesce into three main linguistic and political groups, including the Batswana, who lived as herders and farmers.

The slave and ivory trades expanded during the 1700s, causing resistance, which resulted in the rise of King Shaka, who formed the Zulu chiefdom in 1816.

In the late nineteenth century, hostilities broke out between the inhabitants of Botswana and tribes migrating into the territory from the Kalahari Desert. Tensions also escalated with the Boer settlers (Dutch) from the Transvaal. After appeals by Batswana leaders for help, the British government put "Bechuanaland" under its protection on March 31, 1885. The northern territory remained under direct administration as the Bechuanaland Protectorate, while the southern territory became part of the Cape Colony.

When the Union of South Africa was formed in 1910, out of the main British colonies in the region, the Bechuanaland Protectorate, Basutoland (now Lesotho), and Swaziland were not included, but provision was made for their later incorporation. Although successive South African governments sought to have the territories transferred, Britain kept delaying, and it never occurred.

The election of the South African National Party government in 1948, which instituted apartheid, and South Africa's withdrawal from the Commonwealth in 1961, ended any prospect of incorporation of the territories into South Africa. Botswana was declared a republic on September 30, 1966.

Mafikeng served as capital of the Bechuanaland Protectorate even though it was outside the protectorate's borders, in what is now the North West Province of South Africa, from 1894 until 1965, when Gaborone was made the capital of what was to become Botswana.

The center of the city was constructed in three years, including assembly buildings, government offices, a power station, a hospital, schools, a radio station, a telephone exchange, police stations, a post office, and more than 1,000 houses.

The basic infrastructure was in place for Independence Day on September 30, 1966, when Bechuanaland was the 11th British dependency in Africa to become independent. The first mayor of Gaborone was Reverend J. D. Jones, whose town council led the planning and development of the town in preparation for Independence day. 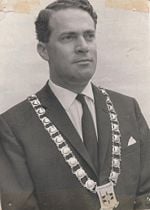 Botswana is a representative democratic republic. The president, who is both the chief of state and head of government, is elected by parliament for a five-year term and is eligible for a second term. The bicameral parliament consists of the House of Chiefs, a largely advisory 15-member body with eight permanent members consisting of the chiefs of the principal tribes, and the National Assembly, comprising 63 members, 57 of whom are directly elected by popular vote.

Local government in Botswana is administered by nine district councils and five town councils. District commissioners have executive authority and are appointed by the central government and assisted by elected and nominated district councilors and district development committees. There has been ongoing debate about the political, social, and economic marginalization of the San (indigenous tribal population).

The Southern African Development Community (SADC) has its headquarters in Gaborone. The organization was formed in 1980 to increase economic cooperation among its members and reduce dependence on South Africa. 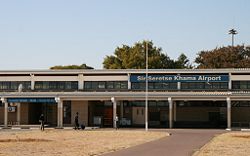 Botswana has maintained one of the world's highest economic growth rates since independence in 1966. Through fiscal discipline and sound management, Botswana has transformed itself from one of the poorest countries in the world to a middle-income country with a per capita gross domestic product of nearly $15,000 in 2007. Two major investment services rank Botswana as the best credit risk in Africa.

Diamond mining has fueled much of the expansion and currently accounts for more than one-third of GDP and for 70-80 percent of export earnings. Tourism, financial services, subsistence farming, and cattle raising are other key sectors. On the downside, the government must deal with high rates of unemployment and poverty. Unemployment officially was 23.8 percent in 2004, but unofficial estimates place it closer to 40 percent.

There is no heavy industry in Gaborone, with motor vehicle assembly plants owned by Hyundai and Volvo closing, citing viability problems.

Gaborone is located on the Cape-Zimbabwe railway. Kombis and taxis ply the routes within the city while buses service surrounding villages and other towns in Botswana. Sir Seretse Khama International Airport lies about six miles (10 km) north of the city and connects with Johannesburg, Cape Town, Harare, Francistown, and Maun.

While English is the official language, only 2.1 percent speak it, according to the 2001 census. Most (78.2 percent) speak Setswana, 7.9 percent speak Kalanga, Sekgalagadi 2.8 percent, other 8.6 percent, while 0.4 percent were unspecified.

Regarding religion; Christians made up 71.6 percent of the population in the 2001 census, Badimo six percent, other 1.4 percent, unspecified 0.4 percent, and those with no religion, 20.6 percent.

The University of Botswana, the nation's largest tertiary education provider, which has its main campus in central Gaborone, is a modern, well-resourced campus with a student population of over ten thousand.

The rate of HIV/AIDS infection in Botswana was 24 percent for adults in 2006.[4] In 2003, the government began a comprehensive program involving free or cheap generic anti-retroviral drugs as well as an information campaign designed to stop the spread of the virus. 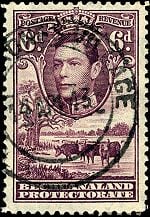 A postage stamp used at Gaborone in 1943, the postmark reading "Gaborone's Village."

Sights of interest in Gaborone include:

Gaborone is a young city that has the unique position of being the capital of one of the most economically and politically stable nations on the African continent. However, Botswana's four decades of uninterrupted civilian leadership, and progressive social policies, is somewhat undermined by the fact that it has one of the world's highest known rates of HIV/AIDS infection. This is somewhat balanced out because it also has one of Africa's most progressive and comprehensive programs for dealing with the diseases.