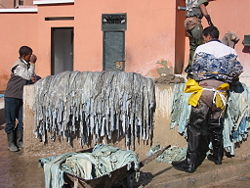 Tanning is the process by which raw animal skins and hides are converted into leather. This process permanently alters the protein structure of the skin, preventing it from decomposing and turning it into a stable material. Tanning may be carried out using animal, plant, or mineral products. The tanning agents used include the plant product known as tannin (from which "tanning" gets its name), fish or animal oil, and salts of chromium.[1] Once tanned, the leather becomes useful for a variety of products, including jackets, gloves, shoes, handbags, wallets, briefcases, and upholstery.

Making rawhide does not require the use of tannin and is made simply by removing the flesh and then the hair. This is done using the following steps:

The two aforementioned solutions for removing the hair also act to clean the fiber network of the skin and therefore allow penetration and action of the tanning agent. In ancient history, tanning was considered a noxious or "odiferous trade" and relegated to the outskirts of the town, amongst the poor. Indeed, tanning by ancient methods is so foul-smelling that tanneries are still isolated from those towns today where the old methods are used. The ancients used leather for waterskins, bags, harnesses, boats, armor, quivers, scabbards, boots and sandals. Tanning was being carried out by the South Asian inhabitants of Mehrgarh between 7000–3300 B.C.E.[2] Around 2500 B.C.E., the Sumerians began using leather, affixed by copper studs, on chariot wheels.

Skins typically arrived at the tannery dried stiff and dirty with soil and gore. First, the ancient tanners would soak the skins in water to clean and soften them. Then they would pound and scour the skin to remove any remaining flesh and fat. Next, the tanner needed to remove the hair fibers from the skin. This was done by either soaking the skin in urine, painting it with an alkaline lime mixture, or simply letting the skin putrefy for several months then dipping it in a salt solution. After the hair fibers were loosened, the tanners scraped them off with a knife.

Once the hair was removed, the tanners would bate the material by pounding dung into the skin or soaking the skin in a solution of animal brains. Among the kinds of dung commonly used were that of dogs or pigeons. Sometimes the dung was mixed with water in a large vat, and the prepared skins were kneaded in the dung water until they became supple, but not too soft. The ancient tanner might use his bare feet to knead the skins in the dung water, and the kneading could last two or three hours.

It was this combination of urine, animal feces and decaying flesh that made ancient tanneries so odiferous.

Children employed as dung gatherers were a common sight in ancient cities. Also common were "piss-pots" located on street corners, where human urine could be collected for use in tanneries or by washerwomen. In some variations of the process, cedar oil, alum or tannin were applied to the skin as a tanning agent. As the skin was stretched, it would lose moisture and absorb the agent.

Leftover leather would be turned into glue. Tanners would place scraps of hides in a vat of water and let them deteriorate for months. The mixture would then be placed over a fire to boil off the water to produce hide glue. Variations of these methods are still used by do-it-yourself outdoorsmen to tan hides. The use of brains and the notion that each animal (except buffalo) has just enough brains for the tanning process have led to the saying "Every animal has just enough brains to preserve its own hide, dead or alive." 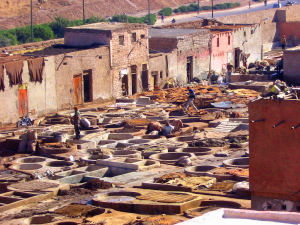 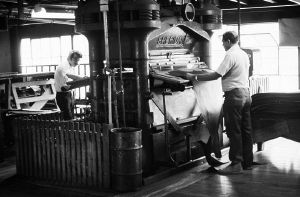 Two men pressing the leather near the end of the tanning process in an American tannery, circa 1976.

The tanning process may be carried out in several stages, as follows:

Preparing hides begins by curing them with salt. Curing is employed to check putrefaction of the protein substance (collagen) because of the chance of bacterial infection due to the time lag that might occur from procuring it to processing it. It removes the excess water from the hides and skins where water flows from inside because of difference in osmotic pressure. Thus the moisture content of hides and skins get greatly reduced. In wet-salting, the hides are heavily salted, then pressed into packs for about 30 days. In brine-curing the hides are agitated in a salt water bath for about 16 hours. Generally speaking, methods employed for curing greatly make the chance of bacterial growth unfavorable. Thus curing is also done by preserving the hides and skins at a very low temperature.

The hides are then soaked in clean water to remove the salt and mainly to bring back the moisture content to a desirable level so that the hide or skin can be treated with chemicals in an aqueous medium. This process is known as "Soaking" and sometimes a hydrating agent is also employed along with water in a very low percentage for hides and skins which have become very dry.

After soaking, the soaked hides and skins are taken for the next operation where these are treated with milk of lime, with or without the addition of sharpening agents like sulfide, cyanides, amines and so forth. The objectives of this operation are mainly to:

The weakening of hair is dependent on the break down of the disulfide link of the amino acid called cystine, which is the characteristic of the keratin class of protein like hair and wools. The hydrogen atoms supplied by the sharpening agent reduce the cystine molecule to cystine and the covalent links are ruptured.

The isoelectric point of the collagen is also shifted to around 4.7, due to liming which is more towards an acidic tannage.

Unhairing Agents used during liming are:

The majority of hair is then removed using a machine, with remaining hair being removed by hand using a dull knife, a process known as scudding. Depending on the end use of the leather, hides may be treated with enzymes to soften them in a process called "bating." But before bating, the pH of the collagen is brought down to a lower level so that enzymes might act on it. This process is known as "deliming." Once bating is complete, the hides and skins are treated with a mixture of common salt and sulfuric acid in case a mineral tanning is to be done. This is done to bring down the pH of collagen to a very low level so as to facilitate the penetration of mineral tanning agent into the substance. This process is known as "pickling." The common salt penetrates the substance twice as fast as the acid and checks the ill effect of sudden drop of pH.

Tanning can be performed with either vegetable or mineral methods. Before tanning, the skins are unhaired, degreased, desalted and soaked in water over a period of six hours to two days. To prevent damage of the skin by bacterial growth during the soaking period, biocides such as pentachlorophenol are used.

Vegetable tanning uses tannin. Tannin occurs naturally in bark. The primary barks used in modern times are chestnut, oak, tanoak, hemlock, quebracho, mangrove, wattle, and myrobalan. Hides are stretched on frames and immersed for several weeks in vats of increasing concentrations of tannin. Vegetable tanned hide is flexible and is used for luggage and furniture.

Mineral tanning usually uses a chromium salt, particularly chromium sulfate. It is employed after pickling. Once the desired level of penetration of chrome into the substance is achieved, the pH of the material is raised again to facilitate the process. This is known as "basification." In the raw state chrome tanned skins are blue and therefore referred to as "wet blue." Chrome tanning is faster than vegetable tanning (less than a day for this part of the process) and produces a stretchable leather which is excellent for use in handbags and garments.[3]

Depending on the finish desired, the hide may be waxed, rolled, lubricated, injected with oil, split, shaved and, of course, dyed. Materials such as suedes and nubucks are finished by raising the nap of the leather by rolling with a rough surface.

The term tanning is also used metaphorically for physical punishment, such as a severe spanking, which leaves clear marks (reddening, stripes, or even scars) on the beaten skin.