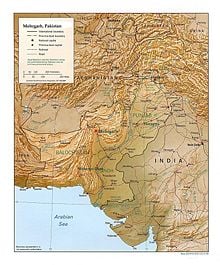 Mehrgarh (Urdu: م‍ﮩ‍رگڑھ , also spelled as Mehrgahr, Merhgarh, or Merhgahr) is one of the most important Neolithic (7000 B.C.E. to 3200 B.C.E.) sites in South Asia. Archaeological digs have unearthed some of the earliest evidence of farming and husbandry in that region. Located near the Bolan Pass, to the west of the Indus River valley and between the present-day Pakistani cities of Quetta, Kalat, and Sibi, Mehrgarh was discovered in 1974 by an the archaeological team directed by French archaeologist Jean-François Jarrige. The site was excavated continuously between 1974 and 1986. After a ten year hiatus, the team resumed excavations in 1996. The earliest settlement at Mehrgarh, located in the northeast corner of the 495-acre (2.00 km²) site, had been a small farming village dated between 7000 B.C.E.–5500 B.C.E.

Evidence gleaned from the dig at Mehrgarh provides a rare insight to life before and during the first stages of the Indus Valley civilization, one of the earliest sites of human civilization. Archaeologists have been piecing together a picture of life in the pre-Indus Valley civilization from pottery, mud-brick ruins, tools, as well as human and animal bones. No evidence of written language exists. Little is known about the religious beliefs and practices of the Mehrgarh civilization, although extensive burial plots have been unearthed. The Department of Archaeology and Museums in Pakistan submitted the Archaeological Site of Mehrgarh to UNESCO for consideration as a World Heritage Site in 2004.

Early Mehrgarh residents lived in mud brick houses, stored their grain in granaries, fashioned tools with local copper ore, and lined their large basket containers with bitumen. They cultivated six-row barley, einkorn and emmer wheat, jujubes and dates, and herded sheep, goats and cattle. Residents of the later period (5500 B.C.E. to 2600 B.C.E.) put much effort into crafts, including flint knapping, tanning, bead production, and metal working. The site had been occupied continuously until about 2600 B.C.E.[1]

In April 2006, the scientific journal Nature announced that the oldest (and first early Neolithic) evidence in human history for the drilling of teeth in vivo (that is, in a living person) had been found in Mehrgarh.[2]

Mehrgarh had been a precursor to the Indus Valley Civilization. "Discoveries at Mehrgarh changed the entire concept of the Indus civilization," according to Ahmad Hasan Dani, professor emeritus of archaeology at Quaid-e-Azam University, Islamabad. "There we have the whole sequence, right from the beginning of settled village life."[3] According to Catherine Jarrige of the Center for Archaeological Research Indus Balochistan, Musée Guimet, Paris:

The Kachi plain and in the Bolan basin (are) situated at the Bolan peak pass, one of the main routes connecting southern Afghanistan, eastern Iran, the Balochistan hills and the Indus valley. This area of rolling hills is thus located on the western edge of the Indus valley, where, around 2500 B.C.E., a large urban civilization emerged at the same time as those of Mesopotamia and the ancient Egyptian empire. For the first time in the Indian subcontinent, a continuous sequence of dwelling-sites has been established from 7000 B.C.E. to 500 B.C.E., (as a result of the) explorations in Pirak from 1968 to 1974; in Mehrgarh from 1975 to 1985; and of Nausharo from 1985 to 1996.[4]

The chalcolithic people of Mehrgarh also had contacts with contemporaneous cultures in northern Afghanistan, northeastern Iran and southern central Asia.[5]

Archaeologists divide the occupation at the site into several periods. Mehrgarh Period I (7000 B.C.E.–5500 B.C.E.) was Neolithic and aceramic (that is, without the use of pottery). Semi-nomadic people using plants such as wheat and barley and animals such as sheep, goats and cattle developed the earliest farming in the area. The settlement had been constructed with simple mud buildings with four internal subdivisions. Numerous burials have been found, many with elaborate goods such as baskets, stone and bone tools, beads, bangles, pendants and occasionally animal sacrifices, with more goods left with burials of males. Ornaments of sea shell, limestone, turquoise, lapis lazuli, sandstone, and polished copper have been found, along with simple figurines of women and animals. Sea shells from far sea shore and lapis lazuli found far in Badakshan, Afghanistan shows good contact with those areas. A single ground stone axe had been discovered in a burial, and several more found on the surface. Those ground stone axes represent the earliest to come from a stratified context in the South Asia.

In 2001, archaeologists studying the remains of two men from Mehrgarh made the discovery that the people of the Indus Valley Civilization, from the early Harappan periods, had knowledge of proto-dentistry. Later, in April 2006, the scientific journal Nature announced that the oldest (and first early Neolithic) evidence for the drilling of human teeth in vivo (that is, in a living person) had been found in Mehrgarh. According to the authors, their discoveries point to a tradition of proto-dentistry in the early farming cultures of that region. "Here we describe eleven drilled molar crowns from nine adults discovered in a Neolithic graveyard in Pakistan that dates from 7,500 to 9,000 years ago. These findings provide evidence for a long tradition of a type of proto-dentistry in an early farming culture."[6]

Mehrgarh Period II (5500 B.C.E.–4800 B.C.E.) and Merhgarh Period III (4800 B.C.E.–3500 B.C.E.) were ceramic Neolithic (that is, pottery was now in use) and later chalcolithic. Much evidence of manufacturing activity has been found and more advanced techniques were used. Glazed faience beads were produced and terracotta figurines became more detailed. Figurines of females were decorated with paint and had diverse hairstyles and ornaments. Two flexed burials were found in period II with a covering of red ochre on the body. The amount of burial goods decreased over time, becoming limited to ornaments and with more goods left with burials of females. The first button seals were produced from terracotta and bone and had geometric designs. Technologies included stone and copper drills, updraft kilns, large pit kilns and copper melting crucibles. There is further evidence of long-distance trade in period II: Important as an indication of this is the discovery of several beads of lapis lazuli—originally from Badakshan.

Somewhere between 2600 B.C.E. and 2000 B.C.E., at the time the Indus Valley Civilization had been in its middle stages of development, the city seems to have been largely abandoned. It has been surmised that the inhabitants of Mehrgarh migrated to the fertile Indus valley as the Balochistan became more arid with climatic changes.