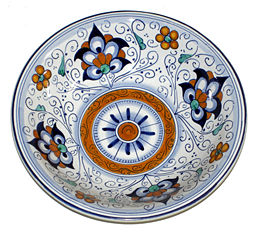 Fine tin-glazed earthenware (maiolica) in traditional pattern, made in Faenza.

Faience or faïence is the conventional name in English for fine tin-glazed earthenware on a delicate pale buff body. The invention of a pottery glaze suitable for painted decoration, by the addition of an oxide of tin to the slip[1] of a lead glaze, was a major advance in the history of pottery. A kiln capable of producing temperatures exceeding 1000° C or 1832 ° F was required to achieve this result (see pottery), which was the result of millennia of refined pottery-making traditions.

The invention of the mature form of the technique seems to have been made in Iran or the Middle East before the ninth century C.E., although archaeologists now include the faience-like pottery found in ancient Egypt. Today, faience is usually made in France, Germany, Spain, and Scandinavia, and Italy, where it is called maiolica. Similarly, Delftware is tin-glazed earthenware made first in early seventeenth century at Delft, Holland. Dutch potters later brought this art of tin glazing to England. The name delftware now applies to wares manufactured in The Netherlands and England.

Technically, lead-glazed earthenware, such as the French sixteenth-century Saint-Porchaire ware, does not properly qualify as faience, but the distinction is not usually maintained. 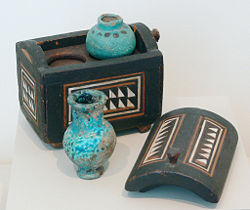 The earliest "faience" pieces, though not conforming entirely to the modern definition, were finely glazed ceramic beads found in Egypt as early as 4000 B.C.E. and at sites in the Indus Valley Civilization. In the Early Dynastic Period (3000-2000 B.C.E.) the technique was used for the making of small animal and human figures, the most striking were the blue-glazed hippopotamus figures of the Middle Kingdom. Faience tiles, chiefly for wall decoration, were found in the subterranean chambers of the Step Pyramid and other buildings.

Highly developed amulets and divine figurines in faience were made in the Late Dynastic Period.

In this period in particular, the faience glaze process was highly developed, and many figures reveal a high standard of modeling and perfection of glazing. The vast quantities of funerary ushabti figurines were often examples of faience.

In the New Kingdom (1539–1075 B.C.E.), during the reigns of Amenhotep III and his successors, tiles with floral designs were used in houses and palaces. During the nineteenth and twentieth dynasties, the royal palaces at Per Ramessu (modern Qantir), Tell al-Yahudiyah, and Madinat Habu were decorated with vibrant polychrome tiles, some bearing figures of captive foreigners. Other figures were made to resemble the tomb owner in the form of a mummy bearing the owner's name.

Faience in the Middle Ages 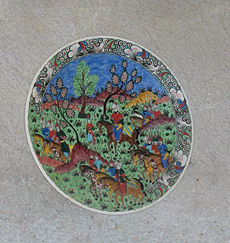 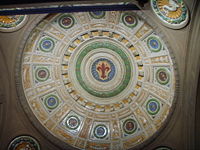 Artists in Iran or the Middle East in the early ninth century C.E. first crafted faience pieces which follow the modern definition of tin-glazed earthenware on a delicate pale buff body. The necessary kiln temperature was always a factor in production of such ware.

In the later ninth century, the Moors brought the technique of tin-glazed earthenware to Al-Andalus in today's Spain, where the art of metallic glazes was perfected. There, tin-glazed ware was produced from the twelfth to the sixteenth centuries and was called Hispano-Moresque ware. From Andalusia it was exported, either directly or via the Balearic Islands to Italy. There, locally produced tin-glazed earthenwares replaced the Spanish ware, beginning in the fourteenth century. Production reached a peak in the late fifteenth and early sixteenth centuries, represented by the Italian faience called Majolica.[2] This type of Spanish pottery owed much to its Moorish inheritance.

The name faience is simply the French name for the town of Faenza, in the Romagna near Ravenna, Italy, where a painted majolica ware on a clean, opaque pure-white ground, was produced for export as early as the fifteenth century. The first northerners to imitate the tin-glazed earthenwares being imported from Italy and/or Spain were the Dutch. Delftware is a kind of faience, made at potteries around Delft in Holland, characteristically decorated in blue on white, in imitation of the blue-and-white porcelain that was imported from China in the early sixteenth century, but it quickly developed its own recognizable Dutch décor.

The 30 Years War drove many potters out of Holland to Germany as the majority of them were Protestants. Dutch potters in northern (and Protestant) Germany established German centers of faience: the first manufacturer's in Germany were opened at Hanau (1661) and Heusenstamm (1662), and soon moved to nearby Frankfurt-am-Main. 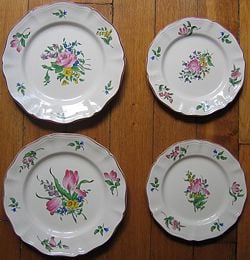 In France, centers of faience manufacturing developed from just prior to the eighteenth century and was led in 1690 by Quimper in Brittany, which today possesses an interesting museum devoted to faience, and followed by Rouen, Strasbourg and Lunéville.

The products of faience factories, rarely marked, are identified by the usual methods of ceramic quality: the character of the body, the character and palette of the glaze, and the style of decoration, faïence blanche' being left in its undecorated fired white slip. Faïence parlante bears mottoes often on decorative labels or banners. Wares for apothecary use bear the names of their intended contents, generally in Latin and often so abbreviated to be unrecognizable to the untutored eye. Mottoes of fellowships and associations became popular in the eighteenth century, leading to the Faïence patriotique that was a specialty of the years of the French Revolution.

In the course of the later eighteenth century, cheap porcelain and creamware (white English lead-glazed earthenware) took over the market for refined faience and even beer steins. In the early nineteenth century, kiln development allowed fine stoneware—to be fired so hot that the unglazed body vitrifies—into a much harder ware.[3] This became all the rage thus causing the last of the traditional makers' ateliers to close. At the low end of the market, local factories continued to supply regional markets with coarse and simple wares. 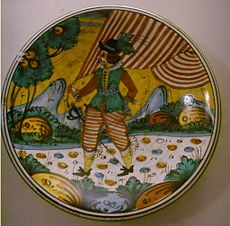 In the 1870s, the Aesthetic movement, notably in Britain, rediscovered the robust charm of faience, and the large porcelain factories marketed revived faience, such as the "Majolica ware" of Minton and of Wedgwood.

Many centers of traditional manufacture are recognized, even the work of some individual ateliers (an artist, artisan, or designer with their own workshop). 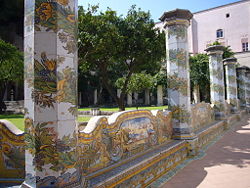 Pillars and benches in faience glaze in Napoli, Italy.

Retrieved from https://www.newworldencyclopedia.org/p/index.php?title=Faience&oldid=1071495
Categories:
This page was last edited on 27 June 2022, at 03:59.
Content is available under Creative Commons Attribution/Share-Alike License; additional terms may apply. See Terms of Use for details.