Thessalonians, Second Epistle to the

The Second Epistle to the Thessalonians, also known as Paul's Second Letter to the Thessalonians or simply 2 Thessalonians, is a short book of the New Testament in the Christian Bible. Written to the Christian church at Thessalonika (modern Thessaloniki or Salonica, Greece), the letter purports to be from Paul, Silas, and Timothy. It is apparently a follow-up epistle to the longer 1 Thessalonians, which had been misinterpreted by certain members of the Thessalonian church to teach that the Second Coming was to occur immediately. The letter corrects this misunderstanding and includes a famous passage explaining that Christ will not return until the "lawless one" has come—a powerful but satanic miracle-worker who will set himself up in the Temple of Jerusalem and proclaim himself to be divine. This prediction came to be instrumental in the development of the concept of the Antichrist. The letter also urges Christians not to abandon their professions in expectation of the imminent Second Coming, saying: "If a man will not work, he shall not eat." (3:10)

Since the turn of the twentieth century, scholars have questioned Paul's authorship of 2 Thessalonians, many believing it to have been written in Paul's name after his death in order to quell apocalyptic disruptions within the church. If the letter is authentic, then it is one of the first writings of the New Testament, coming shortly after 1 Thessalonians, which is usually thought to be either the first or second of Paul's existing letters. If it is not truly Pauline, then it may have been written any time from the later 50s C.E. to the early second century. 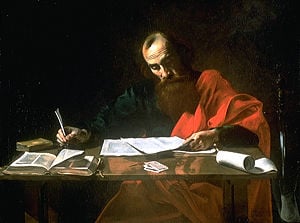 "I, Paul, write this greeting in my own hand," Paul writes in 2 Thessalonians; but today his authoriship of the espistle is increasingly questioned. 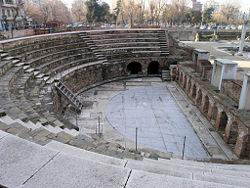 The Roman Forum of Thessalonika

The epistle opens with a salutation from Paul, Silas, and Timothy, the latter two being Paul's companions on his missionary journey. The authors begin with praise for the Thessalonian church and "the persecutions and trials you are enduring." As with 1 Thessalonians, the hope of the Second Coming is still strong, as the writers promise that the church's persecutors will be repaid in full when "Jesus is revealed from heaven in blazing fire with his powerful angels." (Chapter 1)

At the same time, the writers warn that the church should place no stock in prophecies or letters "supposed to have come from us," reporting that the time of the Second Coming now. Before Jesus will come, the "lawless one" (or "lawlessness") must be revealed. The writers speak of a "man doomed to destruction"—sometimes translated as "the man of perdition"—who will "set himself up in God's temple, proclaiming himself to be God." Many will be led astray by this satanic prophet, for he will be able to perform "counterfeit miracles, signs, and wonders." However, all of this is allowed by God Himself, who "sends a powerful delusion" in order to condemn those who do not believe in the truth of the Gospel. Ultimately, however, "the Lord Jesus will overthrow him with the breath of his mouth and destroy him by the splendor of his coming." (Chapter 2)

The authors conclude with an admonition to "keep away from every brother who is idle and does not live according to the teaching you received from us." The readers are reminded that Paul himself labored for his food while he was among them. Paul's own rule is reiterated: "If a man will not work, he shall not eat." (3:10) Those who do not heed the present letter are to be noted and shunned in order than they may be ashamed of themselves. "Yet do not regard him as an enemy," the writers admonish, "but warn him as a brother." The apostle Paul "himself" writes the final sentences in his own hand as a sign of the authenticity of the epistle, which closes with a typical Pauline blessing: "The grace of our Lord Jesus Christ be with you all." (3:18)

The traditional view is that the 2 Thessalonians was probably written from Corinth not many months after 1 Thessalonians. Apparently the first letter was misunderstood, especially regarding the Second Coming of Christ. The Thessalonians had embraced the idea that Paul had taught that "the day of Christ was at hand." The apostle corrects this misinterpretation and announces what first must take place before the end times.

The opposing view of authorship holds that the letter was written after Paul's death in order to combat the growing apocalypticism and extremism, as evidenced by such writings as the Book of Revelation, as well as the Apocalypse of Peter, the Apocalypse of Paul, and other New Testament Apocrypha. Such visions of the impending Last Days led to urgent prophecies of coming disasters and consequent disruptions in church order, including the abandonment of professions by members of the church. Indeed 1 Thessalonians itself emphasized that the Second Coming would occur suddenly, without warning: "you know very well that the day of the Lord will come like a thief in the night." (1 Thess. 5:2) Cooler heads needed to prevail, and thus pseudepigraphal literature—written in an apostles name by another writer—such as 2 Thessalonians, Ephesians, 1 and 2 Timothy, and other pious forgeries were created. 2 Thessalonians itself indicates that such forgeries existed, referring (2:2) to a "letter supposed to have come from us." Pseudepigraphal writings were common in the ancient world. They were often not penned in the spirit of dishonesty, but in the sincere belief that the spirit of the "author" guided the hand of the scribe.

Since the turn of the twentieth century, major studies by scholars such as William Wrede in 1903[1] and Alfred Loisy in 1933[2] challenged the traditional view of the authorship of 2 Thessalonians. There is still widespread dispute over the matter. According to Leon Moris in 1986, the majority of current scholars at that time still held to Paul's authorship.[3] However the majority opinion today appears to be that the letter was not written by Paul but by an associate or disciple after his death, representing what they believed was his message.[4]

One skeptical writer, Norman Perrin, observes: "The best understanding of 2 Thessalonians is to see it as a deliberate imitation of 1 Thessalonians, updating the apostle's thought."[5]

Those who believe Paul was the author of Second Thessalonians often note how he apparently wrote the final salutation at the end in his own hand rather than through a scribe.[6] Of this Bruce Metzger writes, "Paul calls attention to his signature, which was added by his own hand as a token of genuineness to every letter of his (3:17)."[7] Moreover, the emphasis on eschatological themes (meaning a concern for such issues as the Last Days and the Second Coming) is often mentioned as evidence of an early date for the letter, in opposition to the proposition that it was written after Paul's death. The epistle was considered canonical by the second century teacher Marcion and is listed in the Muratorian fragment, the earliest orthodox list of canonical scriptures. It was mentioned by the bishop Irenaeus of Lyon, and quoted by Bishop Ignatius of Antioch, as well as Justin Martyr, and Polycarp of Smyrna.[8] Indeed, no source in the early church doubted its authenticity. 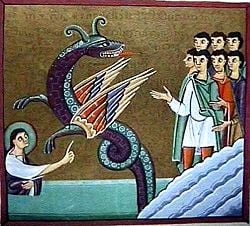 Medieval depiction of the Antichrist

Regardless of its authorship, 2 Thessalonians was and remains an influential writing, especially considering its short length. It provided the impetus for two important Christian doctrines, the Antichrist and the Christian work ethic. The prediction of the "lawless one" later combined with similar prophecies in the Book of Revelation and references to heretical teachers called "antichrists" in 1 and 2 John to produce a horrifying vision of a satanic leader who would arise before the Second Coming of Jesus and lead the masses of people astray. Those who succumbed to his seductive teaching and satanically-inspired miracles would be doomed to Hell at the Final Judgment. Throughout Christian history, these predictions have inspired countless works of art and literature, including many popular works of fiction today, such as Tim LaHaye's best-selling "Left Behind" series.

In its concerns that Christians not be swept up in extreme apocalyptic attitudes, 2 Thessalonians also insisted that "he who does not work, shall not eat." The intent of the writers was to influence a responsible work ethic among Christians who believed in the Second Coming. In 1 Thessalonians, Paul had expressed that many of his readers would still be alive at the time of the Christ's advent, when both the living and the dead would be "caught up into the clouds to meet the Lord in the air." (1 Thess. 4:17) Under such circumstances, some reasoned, working at a profession was pointless and even spiritually misguided. If the Day of the Lord were truly at hand, one must make urgent preparations to meet him, purify oneself, and strive with all one's effort to bring others into the fold. 2 Thessalonians strove to counteract this attitude by stressing the need for a more financially responsible lifestyle, since the exact time of the Second Coming is not actually known. From this saying, came the Christian principle that, while charity is a blessing to the giver, no true Christian should depend on the largess of others if he or she has the means to work.

Retrieved from https://www.newworldencyclopedia.org/p/index.php?title=Thessalonians,_Second_Epistle_to_the&oldid=1084945
Categories:
Hidden category:
This page was last edited on 31 October 2022, at 20:10.
Content is available under Creative Commons Attribution/Share-Alike License; additional terms may apply. See Terms of Use for details.