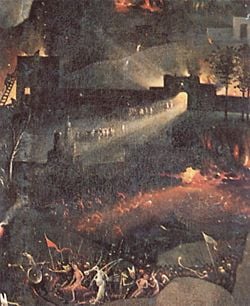 The dark realms of hell portrayed by Hieronymus Bosch bear some resemblance to the scenes described in the Apocalypse of Peter.

The Apocalypse of Peter or Revelation of Peter is an example of popular early Christian apocalyptic literature. Once a serious candidate for inclusion in the New Testament, it was considered scripture by several ancient Christian authorities, but was lost to history for more the 1500 hundred years until its rediscovery near the turn of the twentieth century.

Written by a Christian author in Peter's name during the first half of the second century C.E., the rediscovered text exists in two versions, one Koine Greek, another Ethiopic. The two versions diverge considerably, the Greek version also being shorter. Before its rediscovery, the work had been known only through references to it in other early Christian writings.

Peter's apocalypse describes in detail the tortures which sinners will experience in hell, contrasting these with the glorious life of saints in heaven. The longer Ethiopic version also contains a description of Christ's second coming and the last judgment, as well as a prayer of Jesus indicating that even the souls in hell will eventually be saved by the mercy of God. Although the work was never declared heretical, this doctrine of universal salvation may be a reason why it was rejected from the scriptural canon.

This apocalypse should not be confused with another work by a similar name, known as the Gnostic Apocalypse of Peter.

The Apocalypse of Peter was apparently widely read in the Christian churches of the second century and was considered holy scripture by several authorities. Others, however, questioned whether it was truly written by Peter, pseudepigraphal works in the name of the apostles being common. The Book of Revelation, another apocalyptic work whose status as scripture was disputed, was ultimately accepted, but barely. Several other apocalypses were also rejected, the most popular, together with Peter's apocalypse, being the Shepherd of Hermas. 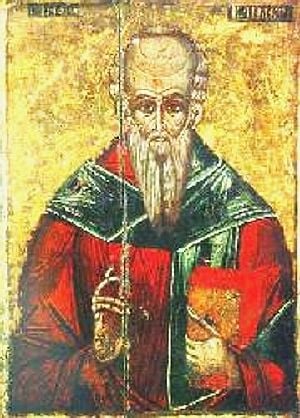 Saint Clement of Alexandria quoted several passages from the Apocalypse of Peter.

The late second century church father Clement of Alexandria considered the Apocalypse of Peter to be holy scripture and is known to have quoted from it. The Muratorian Fragment, a list of canonical scripture composed in the Roman church in the last quarter of the second century, also includes Peter's apocalypse, although with a disclaimer. It reads: "The Apocalypses of John and Peter only do we receive, which some among us would not have read in church." Thus, the work was already well known in the late second century. The earliest date it could have been written is revealed by its use of 4 Esther, which was written about 100 C.E. This puts the probable writing of the Apocalypse of Peter somewhere in the first half of the second century C.E.

The Catalogue Claromontanus, an eastern list of sacred Christian writings from the third century, also names the Revelation of Peter as scripture. Eusebius (c. 339 C.E.), in his Ecclesiastical History (iii., 25), mentions the Revelation of Peter along with the Acts of Paul and the Shepherd of Hermas as disputed books, while admitting elsewhere that Clement of Alexandria had quoted from it as scripture. Although the tide began to turn against it through the work of Athanasius (mid-fourth century) and others, Macarius Magnes (early fifth century) still cites the Apocalypse of Peter as scripture (Apocritica, iv., 6).

By the mid-fifth century, however, it was clear that the work would not be accepted into the Christian canon. Though not condemned as heretical, it began to be included in lists of the New Testament apocrypha, where it remains today. The disappearance of every single manuscript of the work until recently is probably not coincidental, as there seems to have been an effort to destroy some manuscripts considered controversial, as well as those deemed heretical.

The work was thus lost to history except in references from other sources until it was rediscovered in a desert necropolis at Akhmim in Upper Egypt, during excavations directed by Sylvain Grébaut during the 1886-87 season. The fragmentary text consisted of parchment leaves that had been carefully deposited in the grave of a Christian monk of the eighth or ninth century. This manuscript is in the Egyptian Museum in Cairo. The longer Ethiopic version was discovered in 1910. Although more complete, it suffers from a large number of later additions.

The Apocalypse of Peter (Greek version) is framed as a vision granted to Peter by Jesus, first of heaven, and then of hell. It provides graphic descriptions of both, especially of hell, where the punishment of various types of sinners is spelled out in sometimes excruciating detail.

The longer Ethiopic text opens on the Mount of Olives, where Jesus' disciples come to him and join him in prayer, and then ask him to tell the signs of "your coming and the end of the world." Jesus answers them in terms reminiscent of the Gospel of Matthew, adding that, "I come in my majesty, shining sevenfold more than the sun... And my Father shall set a crown upon mine head, that I may judge the quick and the dead and recompense every man according to his works."

Jesus goes on to interpret the parable of the fig tree for Peter and warns the disciples of the coming of "false Christs." In the last days, the resurrection of the dead will occur, as God will command the wild beasts and the birds of prey "to restore all the flesh that they have devoured." Both the dead and the living will thus face God's judgment in their physical bodies.

There will then come a terrible "unquenchable fire that floweth, flaming with fire, and... there shall be a great gnashing of teeth among the children of men." After this, Christ will be enthroned in glory, and the nations of the earth will repent. The elect, who have done good, will be spared, but sinners and the hypocrites "shall stand in the depths of darkness that shall not pass away, and their chastisement is the fire." The Archangel Uriel will supervise the process, seeing that sinners get their just rewards.

The better known part of the Apocalypse of Peter is the older but fragmentary Akhmim text, named for the place of its discovery in Egypt. The longer Ethoipic version also contains these passages, though the texts are not in complete agreement.

In the Akhmim text, the revelation begins with a warning from Jesus about false prophets who will come to "my faithful ones" in order to lead them astray. Jesus invites the disciples to come a mountain with him to pray. The Twelve ask Jesus to show them the appearance of one of "our brethren" who have passed into the next world. He shows them a magnificent vision of two men facing east, toward God. Their radiance is so magnificent that the author admits he is lost for words. Specifically described are:

(In the Ethiopic version the above section is given after the torments in hell, rather than before them.)

The apocalypse goes into elaborate detail about the punishment in hell for every imaginable type of sinner. Here "punishing angels" in dark clothing do their unpleasant work. Some of the listed crimes and penalties include: 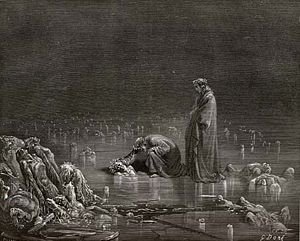 Some of the descriptions in Dante's Inferno resemble those of the Apocalypse of Peter.

The Ethiopic version continues with additional descriptions of various torments and describes the glories of heaven only after completing its description of hell. The Ethiopic text also contains a unique section which explains that, in the end, God will save all sinners from their plight in Hell:

Thus, sinners will finally be saved by the prayers of those in heaven. Peter orders his spiritual son Clement not to speak of this revelation, since God had told Peter to keep it secret: "Thou must not tell that which thou hearest unto the sinners lest they transgress the more, and sin."

Several quotations from the Apocalypse of Peter are quoted in other early Christian writers but do not appear in either of the rediscovered texts. These include:

Clement of Alexdria relates (Eclog. 48) that children who die while their mothers are pregnant are "delivered over to a care-taking angel that they may attain a share of knowledge and gain the better abode." Mothers who have sinned shall have "milk... running down from their breasts and congealing, (which) shall engender small flesh eating beasts: and these run up upon them and devour them." (Eclog. 49)

Macarius Magnes (Apocritica iv., 6 cf. 16) says that the earth "shall present all men before God at the day of judgment, being itself also to be judged, with the heaven also which encompasses it."

Relation to other texts

The Apocalypse of Peter shows a definite relationship to the Second Epistle of Peter, which similarly deals with the themes of rewards in heaven and punishments in hell. In addition, apocryphal works of a later era seem to have drawn from it. Some scholars see parallels to the Sibylline Oracles[1] the Acts of Perpetua, the Acts of Thomas, and the Vision of Paul. Directly or indirectly, the Apocalypse of Peter seems to have inspired many medieval descriptions of the afterlife, both in art and literature.[2]

The reason for the rejection of the Apocalypse of Peter from the canonical scriptures is not clear. It does not appear to be overtly heretical, and is noticeably tamer in many respects from the Book of Revelation, which was ultimately accepted, though not without difficulty. If the work's original form—as distinct from the Ethiopic version of the text—included the prayer of Jesus implying a doctrine of universal salvation, this could be a reason for its being treated with suspicion. Another theory is that it might have been associated with the Gospel of Peter—the Akhmim discovery found these texts together—and this text was overtly heterodox. Other possibilities include that its apostolic origin could not be adequately attested and that apocalypses were generally looked upon with suspicion by church leaders, although certainly not by Christian readers and hearers generally.