Nachman of Breslov (Hebrew: נחמן מברסלב), also known as Nachman of Bratslav, Nahman of Breslov, Naḥman ben Simḥah, or simply as Rebbe Nachman (April 4, 1772 – October 16, 1810), was the founder of the Breslov movement of Hasidic Judaism.

The great-grandson of Hasidism's founder, the Baal Shem Tov, Rebbe Nachman attracted thousands of followers during his lifetime by combining the esoteric secrets of the Kabbalah) with in-depth Torah and Talmud scholarship. Like other Hasidic sages, he illustrated his teachings with memorable folk tales and parables that emphasized Judaism as a joyous, personal relationship with God.

Nachman taught that in every generation, a special, saintly person is born among the Jews who could potentially become the Messiah. His movement was opposed both by more conservative Jews and by other Hasidic leaders who considered his teachings overly-messianic and, therefore, dangerous. Some accused him of thinking that he himself was the Messiah and feared that he, like the seventeenth century messianic pretender, Sabbatai Zevi, could lead many Jews astray.

After his death, his followers continued to regard him as their Rebbe, as he did not appoint any dynastic successor. Rebbe Nachman's teachings were published by his disciple Nathan of Breslov. The Breslover Hasidic movement, like other Hasidic groups, was harshly persecuted by the Communist regimes of Russia and Eastern Europe, as well as by the Nazis during World War II. It managed to survive these challenges, however, and Rebbe Nachman's teachings continue to attract and inspire Jews the world over today.

Nachman was born in the town of Medzhybizh in the Ukraine from a lineage strongly rooted in Hasidic Judaism. His mother, Feiga, was the daughter of Adil (also spelled Udel), who in turn was the daughter of the Baal Shem Tov. Nachman's father, Simchah, was the son of Rabbi Nachman of Horodenka (Gorodenka), one of the Baal Shem Tov's disciples, after whom Rebbe Nachman was named. He had two brothers and a sister; it is not known if he or another brother was the oldest.

As a small child, he eschewed the pleasures of this world and set his sights on spirituality. His days were filled with Torah study, prayer, fasting, meditation, and other spiritual devotions. From the age of six, he would go out at night to pray at the grave of the Baal Shem Tov. He also reportedly paid his teacher three extra coins for every page of Talmud that he taught him, beyond the fee that his father was paying, to encourage the teacher to cover more material.

As was the custom in those times, he married at the age of 13, to Sashia, the daughter of Rabbi Ephraim, and moved to his father-in-law's house in Ossatin (Staraya Osota today). He reportedly acquired his first disciple on his wedding day, a young man named Shimon who was several years older than he.

Over the next few years, Nachman continued to teach and attract new followers in the Medvedevka region of the Urkraine, developing a wide reputation for his piety and erudition. In 1798-1799, Nachman traveled to the Land of Israel, where he was received well by the Hasidim living in Haifa, Tiberias, and Safed. In Tiberias, his influence brought about a reconciliation between the Lithuanian and Volhynian Hasidim.

In 1800, Rebbe Nachman decided to move to the town of Zlatopol, where the townspeople received him with great honor. However, according to Hasidic legend, the man chosen to lead the final prayer service of Yom Kippur did not meet with the Rebbe's approval and was consequently struck dumb. The man later denounced Rebbe Nachman to Rabbi Aryeh Leib in nearby Shpola causing the venerable "Shpoler Zeide (grandfather)" to turn against Rebbe Nachman.

In 1802, Rebbe Nachman moved to the town of Bratslav, Ukraine, known in the Jewish world as "Breslov." Here he declared, "Today we have planted the name of the Breslover Hasidim. This name will never disappear, because my followers will always be called after the town of Breslov."

His move brought him into contact with Nathan of Breslov, a 22-year-old Torah scholar with whom he would be intimately associated for the next eight years. Nathan became the Rebbe's scribe, recording his formal lessons as well as Nachman's magnum opus, Likutey Moharan. After Nachman's death, Nathan also recorded many informal conversations he and other disciples had had with Rebbe Nachman and later published Nachman's works as well as his own commentaries on them.

Rebbe Nachman and his wife Sashia had six daughters and two sons. Two daughters died in infancy and the two sons (Ya'akov and Shlomo Efraim) both died within two years of their births. The surviving daughters were Adil, Sarah, Miriam, and Chayah.

Sashia died of tuberculosis in 1807. Rebbe Nachman soon became engaged to his second wife (name unknown), but he too soon contracted tuberculosis, the sickness that would soon take his life. In May 1810, a fire broke out in Bratslav, destroying the Rebbe's home. He then moved to Uman, Ukraine, where he died of tuberculosis October 16, at the age of 38.

In his short life, Rebbe Nachman achieved much acclaim as a teacher and spiritual leader, as well as provoking great controversy. He is considered a seminal figure in the history of Hasidism. His contributions to Hasidic Judaism include the following:

Another prominent feature of Rebbe Nachman's teachings is his Tikkun HaKlali ("General Restoration" or "General Remedy") for spiritual correction. This general restoration, when taught, could override the spiritual harm caused by many sins, or by one sin whose ramifications are many. It consisted of Rebbe Nachman reciting ten specific Psalms, in the following order: Psalms 16, 32, 41, 42, 59, 77, 90, 105, 137, and 150.

In April 1810, Rebbe Nachman called two of his closest disciples, Rabbi Aharon of Breslov and Rabbi Naftali of Nemirov, to act as witnesses for an unprecedented vow:

If someone comes to my grave, gives a coin to charity, and says these ten Psalms [the Tikkun Ha-Klali], I will pull him out from the depths of Gehinnom (hell)! (Rabbi Nachman's Wisdom #141). It makes no difference what he did until that day, but from that day on, he must take upon himself not to return to his foolish ways (Tzaddik #229).

This vow spurred many followers to undertake the trip to Rebbe Nachman's grave. Some even did so during the days of serious Communist persecution against Hasidism after the Bolshevik Revolution.

Nachman lived at a time of bitter controversy between Hasidim and more traditional Orthodox Jews, known as misnagdim for their opposition to Hasidism. It was also a time of friction between the Hasidim and proponents of Jewish Enlightenment (Haskalah).

However, he also encountered serious opposition from within the Hasidic movement itself, from people who questioned his new approach. One of these was Rabbi Aryeh Leib of Shpola, known as the "Shpoler Zeide" (1725–1812), who began to oppose Rebbe Nachman after Nachman moved to Zlatipola, near Shpola, in 1802. The Shpoler Zeide saw Rebbe Nachman's teachings as deviating from classical Judaism and from the teachings of the Baal Shem Tov as well, leading his fellow Jews down the dangerous path of messianism.

Some academics, as well as his contemporary critics, have postulated that Rebbe Nachman was influenced by the teachings of Sabbatai Zevi, the popular messianic claimant of the seventeenth century. As evidence, they note that Rebbe Nachman's thinking on tikkun olam, the kabbalistic healing of the universe, bears similarities to the teachings of Sabbatai Zevi. Nachman's defenders counter that this teaching was widely held both before and after the advent of Sabbatai, and Rebbe Nachman himself is on record as denouncing Sabbatai as a false Messiah, declaring "may his name be obliterated." Nevertheless the Encyclopedia Britannica notes that Nachman apparently declared himself the “true zaddik” of his generation shortly after returning from Palestine. Given his teaching on the messianic potential of the Tzaddik ha-Dor, it is easy to understand how such a claim would cause alarm among those who feared a new outbreak of Jewish messianism.

Nachman's Torah lessons and stories were published and disseminated mainly after his death by his disciple, Nathan of Breslov. They are as follows:

The Breslov Hasidic movement founded by Rebbe Nachman weathered strong opposition from virtually all other Hasidic movements in the Ukraine throughout the nineteenth century, yet at the same time experienced tremendous growth in numbers of followers from Ukraine, White Russia, Lithuania and Poland. By World War I, thousands of Breslov Hasidim were located in those places. 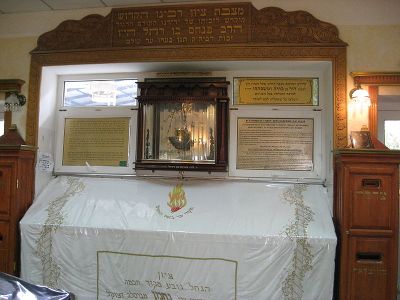 The restored grave of Rebbe Nachman is now visited again by thousands of Hasidim each year.

After the Bolshevik Revolution, Communist oppression forced the movement underground in Russia. Thousands of Hasidim were imprisoned or murdered during the Stalinist purges of the 1930s, and many more were killed by the Nazis who invaded Ukraine in 1941. The movement regenerated itself in England, America, and Israel by those who managed to escape Russia.

On the last Rosh Hashana of his life, Rebbe Nachman stressed to his followers the importance of being with him for that holiday in particular. After the Rebbe's death, Nathan of Breslov instituted an annual pilgrimage to the Rebbe's grave site on Rosh Hashana.

This annual pilgrimage, called the Rosh Hashana kibbutz, drew thousands of Hasidim from all over Ukraine, White Russia, Lithuania, and Poland until 1917, when the Bolshevik Revolution forced it to continue clandestinely. During this time, only a few Hasidim risked making the annual pilgrimage during the Communist era, as the authorities regularly raided the gathering and often arrested and imprisoned worshipers.

Beginning in the mid-1960s, Hasidim who lived outside Russia began to sneak into Uman to pray at Rebbe Nachman's grave during the year. After the fall of Communism in 1989, the gates were reopened entirely. Today, more than 20,000 people from all over the world participate in this annual pilgrimage.

Retrieved from https://www.newworldencyclopedia.org/p/index.php?title=Nachman_of_Breslov&oldid=1086856
Categories:
Hidden category:
This page was last edited on 10 November 2022, at 23:00.
Content is available under Creative Commons Attribution/Share-Alike License; additional terms may apply. See Terms of Use for details.