Mezuzah (Heb. מזוזה, literally "doorpost"; pl. mezuzot) refers to a small kosher parchment inscribed with two sections from the Torah's Book of Deuteronomy (6:4-9 and 11:13-21) affixed to each doorpost and gate in a Jewish home (and business). Attaching Mezuzah to Jewish residences is one of the 613 commandments in Judaism.

Jewish law (Halakha) prescribes in detail the affixing of mezuzot on doorposts. The mezuzah must be handwritten in Hebrew on a special parchment, which is then usually placed in a small case or box to protect it. Although the parchment can be affixed directly to the door, it is usually placed in a case for safekeeping.[1] The wording on the mezuzah's parchment consists of the two Biblical paragraphs that mention the mezuzah. These two paragraphs are also part of the Shema Yisrael ("Hear O Israel") prayer, and appear on the parchments inside Tefillin (phylacteries). Since almost every Jewish home has a mezuzah on its front doorpost, it has historically been a way of recognizing a Jewish home.

A mezuzah case or box

According to Halakha, the mezuzah should be placed on the right side of the door (from the point of view of one entering the building or room), on the lower part of the upper third of the doorpost (or, for high doorways, around shoulder height), within approximately 3 inches of the doorway opening. A minority opinion is that the mezuzah should be affixed on the side opposite of the hinge. In either case, Halakha requires that mezuzot be affixed within 30 days of the Jewish resident or residents moving into the home if its rented and in the Diaspora (i.e. outside Israel). If the home, however, is purchased in the Diaspora or is located in Israel (regardless of it is owned or rented) the mezuzah must be affixed immediately upon moving in. The case should be permanently affixed with nails, screws, glue, or strong double-sided tape. Great caution should be exerted not to puncture, rip, or crack the parchment or the wording on it, since this would invalidate the mezuzah entirely.

Where the doorway is wide enough, Ashkenazi Jews and Spanish and Portuguese Jews tilt the case so that the top slants toward the room the door opens into. This is done to accommodate the variant opinions of Rashi and Rabbeinu Tam as to whether it should be placed horizontally or vertically and also to imply that God and the Torah are coming into the room. Conversely, Sephardic Jews and other non-Ashkenazi Jewish groups have traditionally affixed the Mezuzah case vertically.

The placement of the mezuzah on the door requires the recitation of a particular blessing as follows:

בָּרוּךְ אַתָּה יי אֱלֹהֵינוּ מֶלֶךְ הָעוֹלָם, אֲשֶׁר קִדְּשַׁנוּ בְּמִצְוֹתָיו וְצִוָנוּ לִקְבּוֹעַ מְזוּזָה
(Translation: Blessed are You, Lord our God, King of the Universe, Who sanctified us with His mitzvot, and commanded us to affix a mezuzah.)

Any Jew is permitted to perform this blessing, regardless of whether or not he or she is of the age of majority, so long as he or she is old enough to understand the significance of this mitzvah. After the blessing is made, the mezuzah is attached.

When affixing several mezuzot, the blessing is made only before affixing the first mezuzah, while having in mind that that first blessing applies to the affixing of all the other mezuzot.

Did you know?
The commandment to affix a mezuzah to the doorpost of the home is followed by observant Jews

Observant Jews affix mezuzot on all the doors of their homes, with the exception of bathrooms, very small rooms (e.g. closets) and temporary structures. The garage door is not exempt from having a mezuzah. Gates for outdoor fences also require a mezuzah if there is an overhead lintel. If there is no overhead lintel, a mezuzah is not required. A synagogue does not require a mezuzah unless it is also used for general gatherings or as a place of study.

The gates of the Old City of Jerusalem have huge mezuzot that were affixed after the area came under Israeli control during the Six-Day War in 1967.

Preparing and writing the scroll

There are a total of 4,649 separate instructions that govern the preparation and inscription of a proper mezuzah scroll. When prepared correctly, it is believed that the true mezuzah serves to "guard your going out and your coming in" (Psalms 121:8).

The rendering of the Hebrew text on the scroll is a matter requiring great care. Each letter must be written precisely, preferably by a certified sofer ("scribe"), as one letter written incorrectly would render the scroll invalid (pasul). The text of the mezuzah should be written in one sitting, without any interruptions or distractions (except for the practically necessary dipping of the quill or looking up of the next word) to comply with the command of ukhtavtam ( you shall inscribe them ) wherein tam also indicates a complete, one-iteration writing.

The text is written in a single column on 22 scored lines, corresponding to the 22 letters of the Hebrew alphabet, and is divided into two paragraphs; the second paragraph is indented somewhat to correspond to the way it would be written in a Torah scroll. In all, the Mezuzah's 22 lines of calligraphic script must contain 713 letters.

On the reverse of the scroll, opposite the space used for this indentation, is written Shaddai, one of the names of God in Judaism. This is also an acronym for the words Shomer Daltot Yisrael ("Guardian of the Doorways of Israel"). Most klafim also have, on the reverse, three Kabbalistic names of God, which are produced from the names in the first verse of the Shema by a Caesar cipher with a shift of one.

The parchment is then rolled into a scroll from left to right (evoking the image of a Torah scroll), such that the first words, "Shema" ("Hear O Israel..."), will be read first upon unrolling.

Text of the scroll

The Hebrew wording of the mezuzah's parchment consists of the two Biblical paragraphs which mention the Mezuzah (Deut. 6:4-9; Deut. 11: 13-21). Each Mezuzah parchment must be hand-written by a qualified scribe. A typical Hebrew Mezuzah looks as follows: 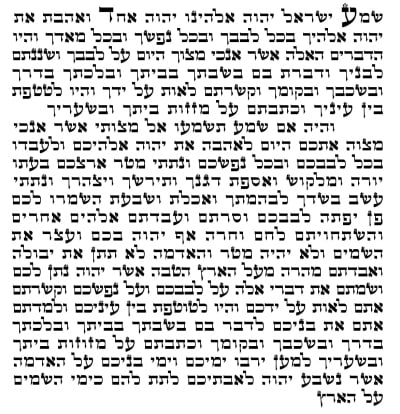 The English translation of the above Torah verses found in the Mezuzah state:

13. And it will be, if you hearken to My commandments that I command you this day to love the Lord, your God, and to serve Him with all your heart and with all your soul, 14. I will give the rain of your land at its time, the early rain and the latter rain, and you will gather in your grain, your wine, and your oil. 15. And I will give grass in your field for your livestock, and you will eat and be sated. 16. Beware, lest your heart be misled, and you turn away and worship strange gods and prostrate yourselves before them. 17. And the wrath of the Lord will be kindled against you, and He will close off the heavens, and there will be no rain, and the ground will not give its produce, and you will perish quickly from upon the good land that the Lord gives you. 18. And you shall set these words of Mine upon your heart and upon your soul, and bind them for a sign upon your hand and they shall be a reminder between your eyes. 19. And you shall teach them to your sons to speak with them, when you sit in your house and when you walk on the way and when you lie down and when you rise. 20. And you shall inscribe them upon the doorposts of your house and upon your gates, 21. in order that your days may increase and the days of your children, on the land which the Lord swore to your forefathers to give them, as the days of heaven above the earth (Deuteronomy 11:13-21).[3]

Because the scroll is tightly wound, it is easy for letters to become cracked or flake off entirely. As a scroll with a cracked or missing letter is no longer considered valid, Halakha mandates that every scroll must be checked by a qualified sofer (scribe) twice every seven years, to ensure that it has not been damaged.

When passing through a doorway with a mezuzah, some Jews touch the mezuzah and kiss their fingers, as an expression of devotion to Torah. This custom originated as a result of a story brought down in the Talmud (Tractate Avodah Zarah 11a):

A Roman Caesar sent guards to arrest Onkelos (a convert to Judaism who wrote the Biblical commentary Targum Onkelos) the son of Kalonymus, to put him to death. When the guards seized Onkelos, he explained to them the basis for faith in the Jewish God, and enticed them with the benefits a life of Judaism has to offer. They could not resist their urge to convert, and they released him.

When the Caesar realized what had happened, he sent another set of guards, but this time with explicit instructions not to listen to the man at all. When they arrived to capture him, Onkelos tried to convince them to release him, but to no avail, because they were under orders not to listen to him. As they pulled him from his house, he touched the mezuzah on the doorpost. When one of the guards asked him what it was that he touched, he replied as follows: "A king of flesh and blood sits in the palace while his servants guard from outside. Yet our Lord allows his servants to sit inside while he guards from outside." When they heard this, these guards, too, could not resist their urge, and converted to Judaism.

The Mezuzah case often features the Hebrew letter shin (ש) inscribed on its upper exterior. Artistic mezuzah cases are often given as gifts for weddings and other special occasions.

When Jewish residents move out of a home, Jewish law forbids the removal of the mezuzah unless the next inhabitants of the residence are known not to be Jewish.[4]

Retrieved from https://www.newworldencyclopedia.org/p/index.php?title=Mezuzah&oldid=1086485
Categories:
Hidden category:
This page was last edited on 9 November 2022, at 16:32.
Content is available under Creative Commons Attribution/Share-Alike License; additional terms may apply. See Terms of Use for details.