Not to be confused with Menahem Mendel Krochmal.

Nachman Kohen Krochmal (näkh'män krôkh'mäl) also called (by acronym) Ranak (born in Brody, Galicia, on February 17, 1785; died at Tarnopol on July 31, 1840), was an Austrian philosopher, theologian, and historian, and a pioneer of modern Jewish scholarship. Krochmal believed that Judaism could only be understood in conjunction with other historical religions and cultures. Influenced by Hegel, he maintained that the history of any people or culture, including that of the Jews, was characterized by a cycle of youth, maturity, and decline. He perceived several such cycles in Jewish history, and proposed that the presence of what he termed the “Absolute Spirit,” the religious genius or national individuality of the Jews enabled Judaism to begin a new cycle after each decline.

Krochmal was leading figure of the Haskalah Jewish enlightenment and Judische Wissenschaft Science of Judaism movements. His major work, Moreh nevukhe ha-zeman (“Guide for the Perplexed of Our Time”), was published posthumously in 1851 by his friend Leopold Zunz. Krochmal introduced ideas which later became predominant among Jewish scholars. His emphasis on the historical realities of the Jewish people influenced later Zionist thought. The concept that the Jewish mission was to spread knowledge of the Absolute Spirit, through the activities of the Jewish people during an ongoing historical process, became a central theme of later Jewish reformists. 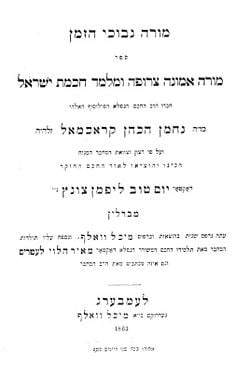 Title page from Nachman Krochmal's Guide for the Perplexed of the Time.

Nachman Kohen Krochmal was born in Brody, Galicia, on February 17, 1785. He began the study of the Talmud at an early age. At the age of fourteen he was married, according to the custom of the time, to the daughter of the wealthy merchant Habermann. He then went to live with his father-in-law at Zolkiev, near Lemberg, where he devoted himself entirely to his studies for the next ten years. Krochmal was completely self-educated and often regretted that he never had the opportunity to study at a university. He read and examined the works of such authors as Moses Maimonides, whose Moreh nevukhim (The Guide for the Perplexed), later became the basis for Krochmal's own Guide, and other Hebrew literature and Hebrew philosophical writings. Krochmal then proceeded to study German and German philosophers, especially Immanuel Kant; to read Latin and French classics and Arabic and Syriac books.

After suffering a breakdown from overwork in 1808, he went to Lemberg for medical treatment, and formed a friendship there with Samuel Judah Löb Rapoport (whose teacher he became) which was very fruitful for Jewish science. On his return to Zolkiev, after having partially recovered, he again took up philosophy, reading Kant, Johann Gottlieb Fichte, and Friedrich Wilhelm Joseph von Schelling, and subsequently Georg Wilhelm Friedrich Hegel, whose system attracted him and exerted a great influence on his views. Aside from Rapoport, who often visited him in Zolkiev, he gathered around him a group of young students.

In 1814, after the death of his wife's parents, he was compelled to earn a livelihood, and became a merchant. Twelve years later he lost his wife, and his health became very poor. In spite of business failures, difficult economic circumstances, and loneliness, he refused an invitation to the rabbinate of Berlin, and instead obtained a position as bookkeeper in Zolkiev, which he held from 1836 to 1838. A serious illness then compelled him to retire to his daughter's house in Tarnopol, where he died two years later.

Krochmal was a brilliant conversationalist and an exceedingly careful student. For a long time he could not be persuaded to publish any of the results of his studies, in consequence of aspersions cast upon him because of his friendly correspondence with the hakham (Torah scholars) of the neighboring Karaite community of Kokusow. Krochmal defended himself in a circular letter against these accusations.

He was not a prolific writer. Besides some Hebrew essays in periodicals (Sulamith, 1818; Ha-Zefirah, Zolkiev, 1824; and Kerem Ḥemed, vols. iv., v.), he wrote only one Hebrew book, Moreh Nebuke ha-Zeman (Lemberg, 1851), edited, according to the author's last will, by his friend Leopold Zunz. Other editions appeared at Lemberg in 1863 and Warsaw in 1898.

Krochmal, like Maimonides, wished to reconcile traditional Judaism with modern secular knowledge. In order to do this, he attempted to trace the manifestations of the Jewish spirit in history, literature, and religious philosophy. Moreh Nebuke ha-Zeman presented Judaism, not as an abstract religion, but as a process visible in the activities of a Jewish people.

Krochmal believed that Judaism could only be understood in conjunction with other historical religions and cultures. He maintained that the history of any people or culture, including that of the Jews, was characterized by a cycle of youth, maturity and decline. He perceived several such cycles in Jewish history, and proposed that the presence of what he termed the “Absolute Spirit,” the religious genius or national individuality of the Jews enabled Judaism to begin a new cycle after each decline. The mission of Israel was to propagate knowledge of this Absolute Spirit, with which it had been especially entrusted.

Moreh Nebuke ha-Zeman (Guide for the Perplexed of the Time) is divided into seventeen chapters, of which the first six deal with religion in general.

Chapter seven describes Israel's spiritual gift as the desire for and faculty of seeking God. The next three chapters contain a philosophical analysis of Jewish history, which is divided into three epochs corresponding to Israel's religious development, or degree of attachment to the Lord. These epochs terminate respectively: (1) with the death of Gedaliah after the destruction of the Temple of Jerusalem; (2) with the death of Bar Kokba (ca. 135 C.E.); and (3) with the expulsion of the Jews from Spain (1492). The author does not characterize the modern period in which he himself lived.

Chapters eleven through fifteen deal with the post-exilic Biblical and the Apocryphal literature and with the various religious movements. The author discusses also the necessity of tradition and gives a critical résumé of the development of the Halakah and Haggadah.

Chapter sixteen gives a brief sketch of the future development of Jewish religious philosophy based on the principles of Hegel. The work finishes with an exposition of Ibn Ezra's philosophy. The historical digressions in the book touch the profoundest problems of Jewish science; and paved the way for critical studies in Jewish history. The work really became, as intended by the author, a "guide" to students of Jewish science in the nineteenth century.

Krochmal applied the Hegelian concept of thesis, antithesis, and synthesis to cultural history. Each culture was based on a particular idea; for example, the pursuit of beauty by the ancient Greeks, that became its guiding principle. There would be a period of growth, and then the idea would spread to become the common property of all mankind. Once this had occurred, the particular culture which had originated the idea would lose its purpose and suffer a decline. According to Krochmal, the Jewish people had also experienced periods of regeneration, growth, and decline. Since they worshipped the Absolute God, however, which embraces all ideas and principles, the Jewish people never lost the purpose for their existence and always re-emerged as an eternal people.

Krochmal’s theories were a reflection of contemporary thought, but they also introduced novel ideas which later became predominant among Jewish scholars. Like J. G. Fichte and Montesquieu, he regarded religion as a reflection of the soul of a people. His emphasis on the historical realities of the Jewish people later influenced Zionist thought. The concept that the Jewish mission was to spread knowledge of the Absolute Spirit, through the activities of the Jewish people during an ongoing historical process, became a central theme of later Jewish reformists.

Moreh Nevukhey Ha-Zeman was inspired by Maimonides’ Guide for the Perplexed, which had been written during the twelfth century. The title, “Guide for the Perplexed of the Time,” was actually given by Leopold Zunz, when he published the work in 1851 after Krochmal’s death. Maimonides had responded to the problem of reconciling Judaism with the Aristotelian philosophy that was predominant during the Middle Ages, and of providing a rational explanation for the Jewish faith. Krochmal was responding to the problem of understanding the mission and historical position of Judaism at a time when secular scholarship had demonstrated that all religions and cultures had a historical background. The traditional Jewish view, that Judaism had been transmitted, intact, from generation to generation, was proving to be less and less tenable.

Krochmal was a strictly observant Jew, but the Orthodox rabbis of his day, suspicious that the concept of historical Judaism amounted to relativism, rejected his ideas. Krochmal himself believed that a modern Jew could acknowledge the developing nature of his religion without surrendering his loyalty to tradition. Though Krochmal never explicitly said so, some scholars of his work believe that he regarded the emergence of the Jews into Western society as the beginning of a new cycle of growth for Judaism.

Retrieved from https://www.newworldencyclopedia.org/p/index.php?title=Nachman_Krochmal&oldid=1086855
Categories:
Hidden category:
This page was last edited on 10 November 2022, at 22:59.
Content is available under Creative Commons Attribution/Share-Alike License; additional terms may apply. See Terms of Use for details.