Yosef ben Ephraim Karo, also known as Joseph Caro (1488 (Portugal) - March 24, 1575 (Safed, Ottoman Empire)) was one of the most significant writers in rabbinic Judaism, being the author of the Shulchan Aruch, an authoritative work on Halakhah (Jewish law). He was also a key leader of the Jewish community of Palestine (Israel) during his time.

Born to a Spanish Jewish family, Karo and his parents were forced to move first to Portugal and then to what is today Bulgaria. After losing two wives who died young, Karo married for a third time and, perhaps spurred by mystical visions, moved to Safed in Palestine. There, he eventually became the growing Jewish city's leading rabbi and devoted himself to Jewish legal studies.

Karo's personal spirituality is a matter of controversy due the fact that his mystical diary, Maggid Mesharim, is thought by some to be attributed to him by a kabbalistic writer intent on harnessing Karo's reputation as a legal scholar. By his own reckoning, Karo's most significant work was his Bet Yosef, a voluminous commentary to the vast literature of the Talmud and later Jewish legal writings. However, it would be his Shulchan Aruch, a shorter compendium intended for his students, that would win his worldwide fame. Initially criticized for its simplicity and its reliance on the tradition of Sephardic rather than Ashkenazi Jewish traditions, Shulchan Aruch would eventually become the authoritative guide for religious observance in Orthodox Judaism. Yosef Karo thus became one of the most influential Jewish authors in history.

Born in Spain, Karo went with his parents to Portugal after the expulsion of the Jews in 1492. When the Jews were forced to leave Portugal, Karo's family went to Nicopolis, today Nikopol, Bulgaria, where he received his first instruction from his father, who was himself an eminent talmudic scholar. After being widowed twice, he married the daughter of Zechariah Sechsel, who, like the fathers of both of his other wives, was a learned and wealthy talmudist.

Between 1520 and 1522 Caro settled at Adrianople, where he is believed to have met the messianic teacher Solomon Molcho, who stimulated his mystical tendencies. Molcho's messianism later offended conservative Jews who complained to Christian authorities, resulting in Molcho's being burned at the stake in 1532. At this time Karo himself was filled with a longing to sanctify the name of God by a martyr's death: to be "consumed on the altar as a holy burnt offering." Like Molkho, he had fantastic dreams and visions, which he believed to be revelations. He strove to become nothing less than the personification of Mishnah, the seminal text of Jewish law, to which he had utterly devoted himself.[1] 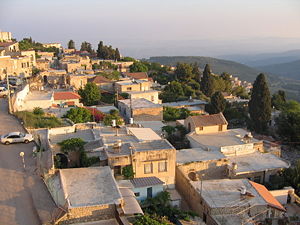 It may have been these mystical tendencies that induced Karo to emigrate to Palestine. Having spent several years at Salonica and Constantinople, he arrived in the Holy Land about 1535 and settled in the growing Jewish community of Safed.

At Safed he met Rabbi Jacob Berab, who exerted a great influence on him. Karo became an enthusiastic supporter of Berab's plans for the restoration of the institution of rabbinic ordination. In 1538, 25 rabbis met in assembly at Safed and officially ordained Berab, giving him the right to ordain any number of others, who would then form a Sanhedrin or central rabbinical court. After Berab's death, Karo tried to carry out these plans. He ordained his pupil Moses Alshech but found that the opposition to establishing a new authority for rabbinical ordination was too great, and finally gave up the endeavor.

In the meantime, though still perhaps internally motivated by a mystical impulse, Karo concentrated on Jewish legal studies and devoted himself to writing. During his lifetime, he published:

After his death there appeared:

Karo also wrote a commentary upon the Mishnah, as well as supercommentaries to Rashi's and Nahmanides' works on the Torah, which have not been preserved.

Karo created the Shulchan Aruch—which translates as the "Prepared Table"—in his old age, for the benefit of those who did not possess the education necessary to understand the longer and more complex Bet Yosef. In Bet Yosef, Karo systematized not only the intimidatingly large body of legal material found in the Talmud, but also much of the vast post-talmudic rabbinical literature. It took the form of a commentary on the earlier codification known as Arbaʿa ṭurim by Jacob ben Asher (1475).

Shulchan Aruch represented a condensation of Bet Yosef. It became, and still is considered, the authoritative code of Jewish law throughout much of rabbinical Judaism. Ironically, Karo himself did not hold a very high opinion of the work, remarking that he had written it chiefly for "young students." However, it would eventually make him the most influential Jewish religious writer since Maimonides.

Shulchan Aruch achieved its reputation and popularity primarily through the very scholars who attacked it, including some of great Polish talmudists of the day. In the last third of the fifteenth century, the East had become nearly completely absorbed in the new kabbalistic school of Isaac Luria, Karo's contemporary and a fellow resident of Safed. The neglect of talmudic studies in the East meant that Karo's work drew contemporary critical attention only in Europe. 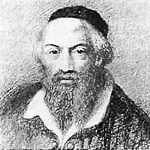 Moses Isserles was one of Karo's major critics, but his attacks also served to popularize Karo's work.

The Polish rabbis Moses Isserles and Solomon Luria were Karo's first important adversaries. Their opposition to his work is often seen as representing a protest of the Ashkenazi Jews against the intellectual supremacy of the Sephardim, including Karo. The authorities Karo followed, especially Maimonides and Isaac Alfasi, were chiefly Sephardim, whose opinions, when differing from their northern European counterparts, did not prevail among the Ashkenazim. These critics also denigrated Shulchan Aruch as overly simple: a book for "children and ignoramuses."

Isserles' criticism attacked Karo's reliance on Sephardic minhagim (customs) without adequate recognition of the Ashkenazic tradition. Solomon Luria went beyond this to argue that only the more ancient commentators could be considered authoritative. The Polish-German writer Ḥayyim ben Bezalel attacked Isserles' criticism of Karo, as well as the Shulchan Aruch itself, on the grounds that both of them ignored German authorities and customs. None of these these critics succeeded in damaging Karo's intellectual reputation, however. Indeed, the controversy only served to make the Shulchan Aruch, with its simple and well-organized approach to understanding the vast talmudic literature, more popular.

Toward the end of the sixteenth century, after Karo's death, the Shulchan Aruch faced serious competition from Rabbi Mordecai Yoffe and his Lebushim, a well written and superbly arranged code that found a middle ground between the voluminous Bet Yosef and the terseness of Shulchan Aruch. Only the severe criticism to which it was subjected by Yoffe's younger contemporary Joshua Falk saved Karo's work from being surpassed in popularity and authority by Yoffe's.

Karo's character remains a matter of controversy, largely based on the question whether the book Maggid Mesharim is really a work by Karo, or is merely ascribed to him. This book is a kind of diary covering 50 years of his supposed discussions with his heavenly mentor, the personified Mishnah. Special stress is laid on asceticism, and Karo is often rebuked for taking more than one glass of wine, or for eating meat. Various kabbalistic interpretations of the Pentateuch are also given.

Karo's mysticism as expressed in Maggid Mesharim was not speculative but experiential in nature; and he devoted very little time to the Kabbalah. Indeed, his heavenly mentor often exhorted him not to neglect the study of it. Karo saw in the recent persecutions of the Jews, signs of Messianic travail. Those who knew him confirmed that, throughout his life, he held to the view that the Messiah would come when Jewish suffering was at its height.

If Karo is not the author, a likely candidate may be Karo's pupil, Moses ben Jacob Cordovero, whose theories are thought to resemble those of the Maggid Mesharim. Arguing in favor of Karo's authorship of the book are the fact that it shows an intimate knowledge of Karo's public and private life and that it promises things to him that were never fulfilled, notably a martyr's death.

Karo eventually became Safed's chief rabbi, and during the last 30 years of his life his reputation was perhaps greater than that any other rabbi since Maimonides, reaching far beyond Safed and the Middle East to the Jews of Europe. So great was his authority that even his opponents were humbled by it. The Italian Azariah dei Rossi, though his views differed widely from Karo's, collected money among the rich Italian Jews to have a work of Karo's printed, and Karo's critic Moses Isserles supported the recognition of one of Karo's decisions at Kraków. When certain members of the Jewish community of Carpentras in France believed themselves to have been unjustly treated by the majority in a matter relating to taxes, they appealed to Karo, whose letter was sufficient to restore to them their rights.

In the East, Karo's authority was even greater. His name heads the decree of excommunication directed against an agent of the Ottoman court Jew Joseph Nasi, and it was Karo who condemned Dei Rossi's Me'or 'Enayim, which used critical methods to test the veracity of the Talmud, to be burned.

Karo's death caused general mourning, and several orations delivered at his funeral have been preserved.

The battle raging around the Shulchan Aruch lasted for nearly a hundred years, but by the middle of the seventeenth century, its authority was firmly established. Today, Karo's literary works are considered among the masterpieces of rabbinic literature.

The Shulchan Aruch is the nearly universally accepted guide for religious observance in Orthodox Judaism today, making Karo one of the most influential Jewish authors in history. Although Shulchan Aruch was a condensation of the much larger Bet Yosef, in the nineteenth century a further abbreviation called Qitzur Shulḥan ʿarukh, written by Solomon Ganzfried, especially for Jewish laypersons, became widely popular in several languages. The Shulchan Aruch HaRav, an updated codification of Karo's work by Hasidic sage Shneur Zalman of Liadi incorporating new commentaries and subsequent responsa, is today used by many Hasidic Jews as their basis for daily practice.

This article incorporates text from the Jewish Encyclopedia, a work now in the public domain.