The immune system is the system of specialized cells and organs that protects an organism from outside biological influences (though in a broad sense, almost every organ has a protective function—for example, the tight seal of the skin or the acidic environment of the stomach).

Nicolaus Copernicus (February 19, 1473 – May 24, 1543) was one of the great polymaths of his age. He was a mathematician, astronomer, jurist, physician, classical scholar, governor, administrator, diplomat, economist, and soldier.

Sojourner Truth (circa. 1797–1883) was a slave who became famous for being an American abolitionist. She was a self-proclaimed Evangelist, who changed her name based on a revelation she received in 1843.

Buddhist art refers to the rich and diverse representations of religious images, sculpture, dance, visual mythology, and symbols deriving from the various Buddhist communities found around the world. 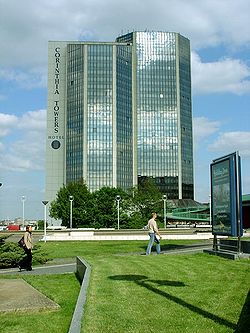 Prague Corinthia Hotel skyscraper
Prague (Czech: Praha), is the capital and largest city of the Czech Republic. Situated on the Vltava River in central Bohemia, it is home to approximately 1.2 million people. Since 1992, its historic center has been included in the UNESCO list of World Heritage Sites. According to Guinness World Records, Prague Castle is the largest ancient castle in the world. The four independent boroughs that had formerly constituted Prague—Hradčany, Malá Strana, Staré Město and Nové Město—were proclaimed a single city in 1784. Further expansion occurred with the annexation of city quarters Josefov in 1850 and Vyšehrad in 1883, and in early 1922, an additional 37 municipalities were incorporated, raising its population to 676,000. In 1938, the population reached one million.

Since the fall of the Iron Curtain, Prague has become one of Europe's and the world's most popular tourist destinations. It is the sixth-most visited European city after London, Paris, Rome, Madrid and Berlin.

Prague suffered considerably less damage during World War II than other major cities in the region, allowing most of its historic architecture to stay true to form. It boasts one of the world's most pristine and varied collections of Gothic, Renaissance, Baroque, neoclassicism, Art Nouveau, cubism, and ultra-modern architecture. Unique in the world is cubism, elsewhere limited to paintings but here materialized in architecture as well. Prague’s cubists even set up a housing establishment inspired by this style. Arts under communism were limited to “socialist realism,” with its unsightly high-rise apartment buildings built of prefabricated panels.

Vincent van Gogh is one of the world's best known and most beloved artists. He is perhaps as widely known for being a madman and cutting off his own earlobe as he is for being a great painter.

Ahimsa is a Sanskrit term meaning "nonviolence" or "non-injury" (literally: the avoidance of himsa: violence).

Dred Scott (1795 – September 17, 1858) was born in Virginia as a slave to the Peter Blow family. He was not taught to read or write but his determination to win his freedom was fierce.

Mongolia (Mongolian: Монгол Улс) is a landlocked country located in East Asia with a population of nearly three million. Mongolia is also sometimes classified as being a part of Central Asia, as well as being termed part of "inner Asia."

Othniel Charles Marsh (October 29, 1831 - March 18, 1899) was one of the pre-eminent paleontologists of the nineteenth century, who discovered, described, and named many fossils found in the American West.

The phoenix, or phœnix as it is sometimes spelled, has been an enduring mythological symbol for millennia and across vastly different cultures.

Psychological warfare is a tactic involving the use of propaganda or similar methods to demoralize the enemy in an attempt to ensure victory, possibly without even having to use physical violence.

Matthew Calbraith Perry (April 10, 1794 – March 4, 1858) was an American naval officer and diplomat who is most famous for his mission to Japan, which opened that country to trade with the West.

Carbon (chemical symbol C; atomic number 6) is a remarkable chemical element that plays a vital role in the structures and processes of the living and nonliving worlds.

The Pantanal is considered by many to be the world’s largest, freshwater, wetland system.

Zambia, officially the Republic of Zambia, is a landlocked country in the central part of southern Africa.

The unicorn, a legendary creature usually depicted with the body of a horse, but with a single—usually spiral—horn growing out of its forehead, is one of the most revered mythical beasts of all time.

New Zealand is a nation made up of two large islands and a number of smaller islands in the southwestern Pacific Ocean.

The Delaware Crossing was declared to be the moment of George Washington’s brightest laurels by Charles Cornwallis.

The Republic of Liberia is a country on the west coast of Africa, bordered by Sierra Leone, Guinea, and Ivory Coast.

Photojournalism is a particular form of journalism (the collecting, editing, and presenting of news material for publication or broadcast) that creates images in order to tell a news story.

Watercolor painting is a painting method. A watercolor is either the medium or the resulting artwork.

Johannes Vermeer or Jan Vermeer (baptized October 31, 1632, died December 15, 1675) was a Dutch painter who specialized in scenes of ordinary people going about their everyday life.

Atonement means that two parties, estranged form each other because one of them offends the other, eventually reconcile to each other.

Resurrection is most commonly associated with the reuniting of the spirit and body of a person in that person's afterlife, or simply with the raising of a person from death back to life.

Albrecht Dürer (May 21, 1471 – April 6, 1528) was a German painter and mathematician who is considered one of the greatest creators of old master prints.

Virginia Woolf (née Stephen) (January 25, 1882 – March 28, 1941) was a British author who is considered to be one of the foremost figures of both Modernism and feminism in the twentieth century.

The State of New Mexico is in the southwestern region of the United States of America.

The Neolithic (or "New" Stone Age) was a period in the development of human technology that is traditionally the last part of the Stone Age.

"Hittites" is the conventional English-language term for an ancient people who spoke an Indo-European language and established a kingdom centered in Hattusa (the modern village of Boğazköy in north-central Turkey), through most of the second millennium B.C.E.

The horse or domestic horse (Equus caballus) is a sizable ungulate ("hoofed") mammal of the family Equidae and the genus Equus.

Poison dart frog (also poison arrow frog, dart frog, or poison frog) is the common name for any of the very small, diurnal frogs of the Dendrobatidae family.

The Potawatomi (also spelled Pottawatomie or Pottawatomi) are a Native American people originally of the Great Lakes region. 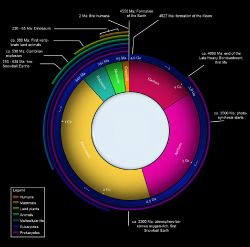 The geologic time scale is used by geologists and other scientists to map the timing and relationships between events that have occurred during the history of the Earth. Based on radiometric dating techniques, the Earth is estimated to be about 4,570 million years (4570 "Ma") old. The geological time scale is a means of mapping the history of the earth. It combines estimates of the age of geological formations as provided by radiometric dating techniques with the direct evidence of sequences and events in the rock record as assembled by geologists. In this way the geologic or deep time of Earth's past can be organized into various units according to events that took place in each period. Different spans of time on the time scale are usually delimited by major geologic or paleontologic events, such as mass extinctions. For example, the boundary between the Cretaceous period and the Palaeogene period is defined by the extinction event that marked the demise of the dinosaurs and of many marine species.

A nucleotide is a chemical compound with three components: a nitrogen-containing base, a pentose (five-carbon) sugar (relatively simple carbohydrates), and one or more phosphate groups.

Nicolaus Copernicus (February 19, 1473 – May 24, 1543) was one of the great polymaths of his age. He was a mathematician, astronomer, jurist, physician, classical scholar, governor, administrator, diplomat, economist, and soldier.

Sir Isaac Newton (January 4, 1643 – March 31, 1727) was an English physicist, mathematician, astronomer, alchemist, inventor, and natural philosopher, who is generally regarded as one of the most accomplished and influential scientists in history.

The term plastic is applied to a wide range of synthetic and semi-synthetic products, and a few naturally occurring materials as well.

Paleoclimatology literally means the study of (-ology) past (paleo-) climates. The study of past climates ranges on time scales from the order of decades to billions of years.

Capital punishment, or the death penalty, is the execution of a convicted criminal by the state as punishment for the most serious crimes—known as capital crimes.

Earth is the third planet in the solar system in terms of distance from the Sun, and the fifth in order of size.

Ayn Rand (February 2, 1905 to March 6, 1982) was born Alissa Zinovievna Rosenbaum, in Russia and emigrated to the United States to become an outspoken champion of capitalism.

A family is a domestic group of people, or a number of domestic groups, typically affiliated by birth or marriage, or by comparable legal relationships including adoption.

Anthropomorphism is the attribution of human characteristics and qualities to non-human beings, objects, natural, or supernatural phenomena.

The United States of America—also referred to as the United States, the USA, the U.S., America, the States, or (archaically) Columbia—is a federal republic of 50 states and the District of Columbia located primarily in central North America.

Retrieved from https://www.newworldencyclopedia.org/p/index.php?title=Info:Featured_articles&oldid=742088
This page was last edited on 24 June 2008, at 12:40.
Content is available under Creative Commons Attribution/Share-Alike License; additional terms may apply. See Terms of Use for details.