Wrangel Island (Russian: о́стров Вра́нгеля, ostrov Vrangelya) is an island in the Arctic Ocean, between the Chukchi Sea and East Siberian Sea. It lies astride the 180° meridian, displacing the International Date Line eastwards at this latitude to avoid the island as well as the Chukchi Peninsula on the Russian mainland. The closest land to Wrangel Island is tiny and rocky Herald Island located 60 km to the east. Wrangle Island has the highest density of polar bear dens as well as Pacific walrus population in the world. Gray whales migrating from Mexico use Wrangel Island as a major feeding ground. Over 100 species of birds, many of them endangered, migrate to the island during the summer time. Over 400 plants have been identified, more than any other Arctic island.

Humans lived as early as 1700 B.C.E. in the region, at the end of the mammoth period. the Chukchi people of Siberia may have migrated from the south, following reindeer migration routes. British, Canadians, Americans and Russians have sent expeditions to the remote arctic region, the first expedition launched by the Russians in 1820. Wrangel Island belongs administratively to the Chukotka Autonomous Okrug of the Russian Federation. This rocky island has a weather station and two permanent Chukchi fishing settlements on the southern side of the island (Ushakovskoye and Starry). UNESCO designated Natural System of Wrangel Island Reserve a World Heritage Site in 2004.

Wrangel Island consists of folded, faulted, and metamorphosed volcanic, intrusive, and sedimentary rocks ranging in age from Upper Precambrian to Lower Mesozoic. The Precambrian rocks, about two kilometers (1.2 miles) thick, consist of Upper Proterozoic sericite and chlorite slate and schist that contain minor amounts of metavolcanic rocks, metaconglomerates, and quartzite. Metamorphosed gabbro, diabase, and felsic dikes and sills and granite intrude those rocks. Overlying the Precambrian strata are up to 2.25 kilometers (1.4 miles) of Upper Silurian to Lower Carboniferous consisting of interbedded sandstone, siltstone, slate, argillite, some conglomerate and rare limestone and dolomite. Those strata are overlain by up to 2.15 kilometers (1.34 miles) of Carboniferous to Permian limestone, often composed largely of crinoid plates, interbedded with slate, argillite and locally minor amounts of thick breccia, sandstone, and chert. The uppermost stratum consists of 0.7 to 1.5 kilometers (0.4 to 0.9 miles) of Triassic clayey quartzose turbidites interbedded with black slate and siltstone.[1]

A thin veneer of Cenozoic gravel, sand, clay and mud underlie the coastal plains of Wrangel Island. Late Neogene clay and gravel, only a few tens of meters thick, rest upon the eroded surface of the folded and faulted strata that comprise Wrangel Island. Indurated Pliocene mud and gravel, only a few meters thick, overlie the Late Neogene sediments. Sandy Pleistocene sediments occur as fluvial sediments along rivers and streams and as a very thin and patchy surficial layer of either colluvium or eluvium.[1]

Wrangel Island is a breeding ground for polar bears (having the highest density of dens in the world), seals, and lemmings. Over 100 species of birds migrate to the island during the summer, many of them endangered. Some of the birds that reside on the island include Snow geese and Brent geese, Snowy owls, Eider ducks, Long-tailed and Pomarine skuas (jaeggers), Black, Common and Thick-billed guillemots, Glaucous gulls and kittiwakes, Sabine’s gulls, Lapland longspurs, Snow buntings, White wagtails, Peregrine falcons and Gyrfalcons.[2]

Mammoths survived there until 1700 B.C.E., the most recent survival of all known mammoth populations. Due to limited food supply, they were much smaller in size than typical mammoths.[3] The flora includes 417 species of plants, double any other arctic tundra territory of comparable size and more than any other Arctic island.

Wrangel Island has a severe polar climate. The region is blanketed by masses of dry and cold Arctic air for most of the year. Warmer and more humid air can reach the island from the south-east during summer. Dry and heated air from Siberia comes to the island periodically. Winters are prolonged, characterized by steady frosty weather and high northerly winds. During that period the temperatures usually stay well below freezing for months. Snow-storms with wind speeds of 140 km/h (87 mph) or higher occur frequently in February and March.

The short summers are cool but comparatively mild as the polar day generally keeps temperatures above 0 °C (32 °F). Some frosts and snowfalls occur, and fog is common. The center of the island experiences warmer and drier weather because the interior's topography encourages foehn winds. Average relative humidity is about 82 percent. 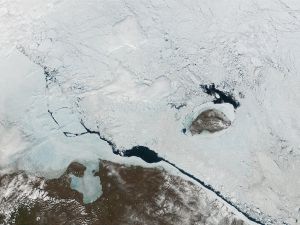 Evidence for prehistoric human occupation was uncovered in 1975 at the Chertov Ovrag site.[4] Various stone and ivory tools were found, including a toggling harpoon. Radiocarbon dating shows the human inhabitation roughly coeval with the last mammoths on the island circa 1,700 B.C.E., though no direct evidence of mammoth hunting has been found.

A legend prevalent among the Chukchi people of Siberia tells of a chief Krachai or Krahay, who fled with his people (the Krachaians or Krahays) across the ice to settle in a northern land.[5] Though the story is mythical, the existence of an island or continent to the north was lent credence by the annual migration of reindeer across the ice, as well as the appearance of slate spear-points washed up on Arctic shores, made in a fashion unknown to the Chukchi.

In 1764, the Cossack Sergeant Andrejew claims to have sighted the island, called "Tikegen Land," and found evidence of its inhabitants, the Krahay. The island is named after Baron Ferdinand von Wrangel (1797–1870), who, after reading Andrejew's report and hearing Chukchi stories of land at the island's coordinates, set off on an expedition (1820–1824) to discover the island, with no success.[6]

In 1849, Henry Kellett, captain of HMS Herald, landed on and named Herald Island, and thought he saw another island to the west, thereafter indicated on British Admiralty charts as "Kellett Land."[1]

In August 1867, Thomas Long, an American whaling captain, "approached it as near as fifteen miles. I have named this northern land Wrangell [sic] Land … as an appropriate tribute to the memory of a man who spent three consecutive years north of latitude 68°, and demonstrated the problem of this open polar sea forty-five years ago, although others of much later date have endeavored to claim the merit of this discovery."[7]

George W. DeLong, commanding USS Jeanette, led an expedition in 1879 attempting to reach the North Pole, expecting to go by the "east side of Kellett land," which he thought extended far into the Arctic.[8] His ship became locked in the polar ice pack and drifted eastward within sight of Wrangel before being crushed and sunk. The first known landing on Wrangel Island took place on August 12, 1881, by a party from the USRC Corwin, who claimed the island for the United States.[9] The expedition, under the command of Calvin L. Hooper, was seeking the Jeannette and two missing whalers in addition to conducting general exploration. It included naturalist John Muir, who published the first description of Wrangel Island.

In 1911, the Russian Arctic Ocean Hydrographic Expedition on icebreakers Vaygach and Taymyr under Boris Vilkitsky, landed on the island.[10]

In 1914, the survivors of the ill-equipped Canadian Arctic Expedition, organized by Vilhjalmur Stefansson, were marooned there for nine months after their ship, the Karluk, was crushed in the ice pack.[11] The survivors were rescued by the American motorized fishing schooner King & Winge[12] after Captain Robert Bartlett walked across the Chukchi Sea to Siberia to summon help.

In 1921, Wrangel Island would become the stage for one of history's tragedies when Stefansson sent five settlers (one Canadian, three Americans, and one Inuit) in a speculative attempt to claim the island for Canada.[13] The explorers were handpicked by Stefansson based upon their previous experience and academic credentials. Steffanson considered those with advanced knowledge in the fields of geography and science for this expedition. The initial group consisted of Allan Crawford of Canada, and Fred Maurer, Lorne Knight and Milton Galle of the U.S.. In 1923, the sole survivor of the expedition, the Inuk Ada Blackjack, was rescued by a ship that left another party of thirteen (American Charles Wells and 12 Inuit). In 1924, the Soviet Union removed the members of that settlement and established the settlement that survived as of 2008 on the island.

In 1926, a team of Soviet explorers, equipped with three years of supplies, landed on Wrangel Island. Clear waters that facilitated the 1926 landing were followed by years of continuous heavy ice blocking the island. Attempts to reach the island by sea failed and it was feared that the team would not survive their fourth winter.

In 1929, Icebreaker Fyodor Litke was chosen for a rescue operation. It sailed from Sebastopol led by captain Konstantin Dublitsky. On July 4, it reached Vladivostok where local staff replaced all Black Sea sailors. Ten days later Litke sailed north; it passed Bering Strait, and tried to pass De Long Strait and approach the island from south. On August 8 scout plane reported impassable ice in the strait, and Litke turned north, heading to Herald Island. It failed to escape mounting ice; August 12, the captain shut down the engines to save coal and had to wait two weeks until the ice pressure eased up. Making a few hundred meters a day, Litke reached the settlement August 28. On September 5, Litke turned back, taking all the "islanders" to safety. This operation earned Litke the order of the Red Banner of Labour (January 20, 1930), as well as memorial badges for the crew.

In the 1930s, Wrangel Island became the scene of a bizarre criminal story when it fell under the increasingly arbitrary rule of its appointed governor Konstantin Semenchuk, who controlled the local populace and his own staff through open extortion and murder. He forbade the local Eskimos to hunt walruses, which put them in danger of starvation, while collecting food for himself. He was then implicated in the mysterious deaths of some of his opponents, including the local doctor. The subsequent Moscow trial in June 1936 sentenced Semenchuk to death for "banditry" and violation of Soviet law.[14]

During and after World War II, many German Schutzstaffel (SS) prisoners of war and the remnants of Andrey Vlasov's Russian Liberation Army were imprisoned and died on Wrangel Island. A prisoner who later emigrated to Israel, Efim Moshinsky, claims to have seen Raoul Wallenberg there in 1962.[15]

According to some U.S. individuals, including the group State Department Watch,[16] eight Arctic islands currently controlled by Russia, including Wrangel Island, are claimed by the United States. According to the United States Department of State[17] no such claim exists. The USSR/USA Maritime Boundary Treaty,[18] which has yet to be approved by the Russian Duma, does not address the status of these islands.

In 2004 Wrangel Island and neighboring Herald Island, along with their surrounding waters, were added to UNESCO's World Heritage List.[19]

Retrieved from https://www.newworldencyclopedia.org/p/index.php?title=Wrangel_Island&oldid=1089371
Categories:
Hidden category:
This page was last edited on 25 November 2022, at 22:53.
Content is available under Creative Commons Attribution/Share-Alike License; additional terms may apply. See Terms of Use for details.