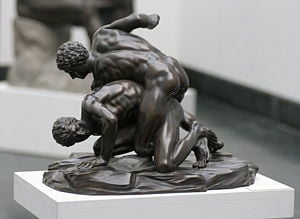 Wrestling is the act of physical engagement between two unarmed persons, in which each wrestler strives to get an advantage over his opponent.

Physical techniques which embody the style of wrestling are clinching, holding, locking, and leverage. Avoiding potentially lethal techniques, wrestling has aspects of ritual fighting, but its basic principles are closely related to those of military hand-to-hand combat or self-defense systems. Many styles of wrestling are known all over the world and have long histories, and sport wrestling (particularly amateur wrestling) has become an Olympic sport.

Wrestling made a name for itself while history was still young in Ancient Egypt, Ancient Greece, and several smaller countries. The concept of wrestling dates as far back as 3400 B.C.E. In fact, origins of the sport can be traced back 15,000 years to cave drawings in France. Early Egyptian and Babylonian reliefs depict wrestlers using most of the holds known to the present-day sport. In ancient Greece, wrestling occupied a prominent place in legend and literature; wrestling competition, brutal in many aspects, was the supreme contest of the Olympic Games. The ancient Romans borrowed heavily from Greek wrestling, but eliminated much of its brutality. During the Middle Ages, wrestling remained popular and enjoyed the patronage of many royal houses, including those of France, Japan, and England. 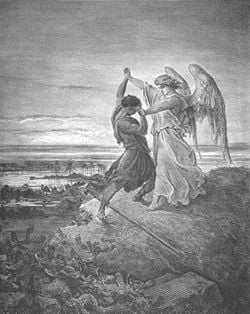 Jacob Wrestling with the Angel; illustration by Gustave Doré (1855)

The Epic of Gilgamesh in Sumerian literature features its hero Gilgamesh establishing his credibility as a leader after wrestling Enkidu. Other sculptures and literature from ancient Mesopotamia show that wrestling was held in popularity.[1] One other early (probably c. 1500 B.C.E.) description of wrestling appears in the Old Testament book of Genesis 32:22-32. The passage depicts the patriarch Jacob wrestling with the Angel, for which Jacob was subsequently renamed Israel. (Israel translates to "wrestles (or strives) with God.")[1]

The Mahabharata, one of the major Sanskrit epics of ancient India, describes the encounter between the accomplished wrestlers of Bhima and Jarasandha; "grasping each other in various ways by means of their arms, and kicking each other with such violence as to affect the innermost nerves, they struck at each other's breasts with clenched fists. With bare arms as their only weapons roaring like clouds they grasped and struck each other like two mad elephants encountering each other with their trunks."[2] The popular folk wrestling style of India performed on a mud surface called the akhara follows the Indian tradition.

Shuai Jiao, a wrestling style originating in China, is arguably the most ancient of all Chinese martial arts, with a reported history of over 4,000 years. (The date may be legendary, but wrestling was reportedly used by the Yellow Emperor during his fight against the rebel Chih Yiu and his army in 2697 B.C.E.) During these matches, the combatants reportedly wore horned helmets that they used to gore their opponents while using a primitive form of grappling. This early style of combat was first called Jiao Ti (butting with horns). Throughout the centuries, the hands and arms replaced the horns while the techniques increased and improved. The name Jiao Ti also changed over time, both through common usage and government decree.[3]

The first documented evidence of wrestling in Egypt appeared circa 2300 B.C.E., on the tomb of the Old Kingdom philosopher Ptahhotep. During the period of the New Kingdom (2000-1085 B.C.E.), additional Egyptian artwork (often on friezes), depicted Egyptian and Nubian wrestlers competing. Carroll notes striking similarities between these ancient depictions and those of the modern Nuba wrestlers.[4] On the 406 wrestling pairs found in the Middle Kingdom tombs at Beni Hasan in the Nile valley, nearly all of the techniques seen in modern freestyle wrestling could be found.[1]

During the period of Ancient Greece (about 1100 to 146 B.C.E.), Greek wrestling was a popular form of martial art in which points were awarded for pinning a competitor by stretching the opponent prone to the ground or touching his back to the ground, forcing a competitor to submit or by forcing a competitor out of bounds (arena).[5] Three falls determined the winner. It was at least featured as a sport since the eighteenth Olympiad in 704 B.C.E. Wrestling is described in the earliest celebrated works of Greek literature, the Iliad and the Odyssey.[1] Wrestlers were also depicted in action on many vases, sculptures, and coins, as well as in other literature. Other cultures featured wrestling at royal or religious celebrations, but the ancient Greeks structured their style of wrestling as part of a tournament where a single winner emerged from a pool of competitors.[1] Greek mythology celebrates the rise of Zeus as ruler of the earth after a wrestling match with his father, Kronos. Both Herakles and Theseus were famous for their wrestling against man and beast. Late Greek tradition also stated that Plato was known for wrestling in the Isthmian games.[1]

This continued into the Hellenistic period. Ptolemy II and Ptolemy III of Egypt were both depicted in art as victorious wrestlers. After the Roman conquest of the Greeks, Greek wrestling was absorbed by the Roman culture and became Roman wrestling during the period of the Roman Empire (510 B.C.E. to AD 500). Arabic literature depicted Muhammad as a skilled wrestler, defeating a skeptic in a match at one point. By the eighth century, the Byzantine emperor Basil I, according to court historians, won in wrestling against a boastful wrestler from Bulgaria.[1]

In 1520, at the Field of the Cloth of Gold pageant, Francis I of France threw Henry VIII of England in a wrestling match.[1] In Henry VIII's kingdom, folk wrestling in many places was widely popular and had a long history. In particular, the Lancashire style may have formed the basis for Catch wrestling also known as "catch as catch can." The Scots later formed a variant of this style, and the Irish developed the "collar-and-elbow" style which later found its way into the United States.[1] The French developed the modern Greco-Roman style which was finalized by the nineteenth century and by then, wrestling was featured in many fairs and festivals.[6]

The term wrestling is an Old English word that originated some time before 1100 C.E. It is perhaps the oldest word still in use in the English language to describe hand-to-hand combat.[7] The Merriam-Webster online dictionary defines wrestling as "a sport or contest in which two unarmed individuals struggle hand-to-hand with each attempting to subdue or unbalance the other."[8]

Roget's New Millennium Thesaurus does not support the usage of "wrestling" (noun) and "grappling" (noun) as synonymous. [9]

A Greco-Roman wrestling match in the United States

Greco-Roman is an international discipline and an Olympic sport. "In Greco-Roman style, it is forbidden to hold the opponent below the belt and to actively use the legs in the execution of any action." Recent rule changes have increased the opportunities for "high amplitude" throws. One of the most well known Greco-Roman wrestlers from the United States is Rulon Gardner.[11]

Freestyle wrestling is an international discipline and an Olympic sport. "In free style, it is allowed to hold the legs of the opponent, to make trips and to use actively legs on the execution of any action."[12] It is thought to have originated from English catch wrestling, and is currently the international style in which women participate in competition.

Sambo is a martial art that originated in the Soviet Union (particular Russia) in the twentieth century. It is an acronym for "self-defence without weapons" in Russian and had its origins in the Soviet armed forces. Its influences are varied, with techniques borrowed from sports ranging from the two international styles of Greco-Roman and freestyle to boxing, judo, jujitsu, European styles of folk wrestling, and even fencing. The rules for sport sambo are similar to those allowed in competitive judo, with a variety of leglocks and with over 5,000 defense holds from the various national wrestling styles in the Soviet Union, while not allowing chokeholds.[13]

"Grappling, also called submission wrestling, refers to the gripping, handling, and controlling of an opponent without the use of striking, typically through the application of various grappling holds and counters to various hold attempts. Grappling can be used in both a standing position, where it is known as stand-up grappling, and on the ground, where it is known as ground grappling. Grappling is an essential part of both clinch fighting and ground fighting."[14] Grappling is also used to describe the skills used in mixed martial arts competitions, differing from the FILA definition. 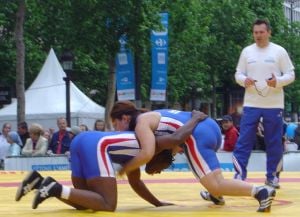 Apparently in a bid to give wrestling greater appeal to television audiences, FILA adopted beach wrestling as an official discipline during 2004-2005. Beach wrestling is standing wrestling done by wrestlers, male or female, inside a sand-filled circle measuring 6 meters in diameter. There are only two weight categories, heavy and light. The objective is to throw your opponent or take your opponent to his or her back. The wrestlers wear swimsuits rather than special wrestling uniforms. Wrestlers may also wear spandex or athletic shorts.[15][16] 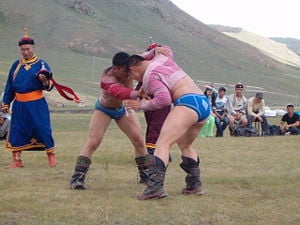 Burumbators on the traditional Nadam festival in Mongolia, near Ulanbataar 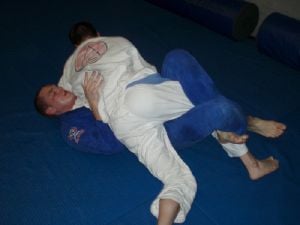 Brazilian Jiu-Jitsu practitioners working in a half guard 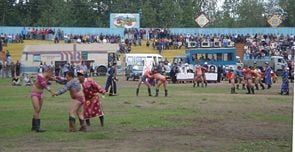 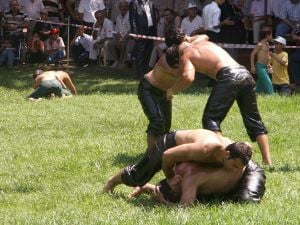 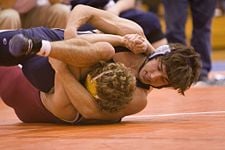 Collegiate wrestling (sometimes known as scholastic wrestling or folkstyle wrestling) is the commonly used name of wrestling practiced at the university level in the United States. A very similar style is practiced at the high school and middle school levels. The term is used to distinguish the styles of wrestling used in other parts of the world, and for those of the Olympic Games: Greco-Roman wrestling and Freestyle wrestling. There are currently several organizations which oversee collegiate wrestling competition: Divisions I, II, and III, of the NCAA, NJCAA, NAIA, and the NCWA. Division I of the NCAA is considered the most prestigious and challenging level of competition. A school chooses which organization to join, although it may compete against teams from other levels and organizations during regular-season competition. The collegiate season starts in November and culminates with the NCAA tournament held in March.

Wrestling as a martial art

Many other prominent and successful fighters began their training in various forms of wrestling, and fighters from non-wrestling backgrounds often pursue wrestling training to complement their other skills.

-You are about to be reversed, therefore let him go and give up only 1 point. -You are about to be called for stalling because you can't break your opponent down. This action will save a penalty point, which you may be able to make up by scoring a takedown. If you don't let him go you'll be penalized, then if he escaped he has scored 2 points instead of the one you gave up when you "cut him loose."

Retrieved from https://www.newworldencyclopedia.org/p/index.php?title=Wrestling&oldid=1000943
Categories:
Hidden category:
This page was last edited on 22 October 2016, at 15:09.
Content is available under Creative Commons Attribution/Share-Alike License; additional terms may apply. See Terms of Use for details.