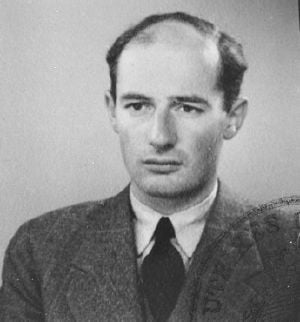 Raoul Gustav Wallenberg (born August 4, 1912, exact date of death is disputed) was a Swedish diplomat and a member of the influential Wallenberg family. In the later stages of World War II, he worked tirelessly and at great personal risk to save many thousands of Hungarian Jews from the Holocaust. He was later arrested by the Soviets, who suspected him of being a spy; the circumstances of his death while in their custody are still a matter of great controversy. Raoul's actions stand as a tribute to having the courage of one's convictions under the most trying of circumstances, and to the difference that one righteous person can make even in the face of unspeakable evil.

He was born in Kappsta, Sweden, to Raoul Oscar Wallenberg (1888-1912), a Swedish naval officer, and Maria "Maj" Sofia Wising (1891-1979), who had some Jewish ancestors. Raoul Wallenberg, Sr., died of cancer three months before his son was born. His paternal grandfather was also a Swedish diplomat. In 1918, his mother married Fredrik von Dardel. Raoul Wallenberg also had a maternal half-sister, Nina, whose daughter Nane is married to Kofi Annan.

In 1931, Wallenberg went to study in the United States, earning a bachelor's degree in architecture from the University of Michigan, in 1935. He also learned Russian. He returned to Sweden, and his grandfather arranged a job for him in Cape Town, South Africa, where he worked for a Swedish company that sold construction material. In the same year, he went to work at a branch office of a Dutch bank in Haifa, where he befriended a Hungarian Jew. He returned to Sweden in 1936, and took a job at The Central European Trading Company. The firm was owned by a Jewish man, Lauer, who was barred from visiting certain areas of Europe, so Wallenberg went instead. There, he learned how the Nazis thought and how best to speak with them.

During the Holocaust, Wallenberg was deeply disturbed by the Nazis' campaign. He was assigned as first secretary to the Swedish legation in Budapest, Hungary, on July 9, 1944. He used his diplomatic status to save many Hungarian Jews by issuing them Swedish "protective passports" (German: Schutz-Pass), which identified the bearers as Swedish subjects awaiting repatriation. Although not legally valid, these documents looked impressively official and were generally accepted by the German and Hungarian authorities, occasionally aided by outright bribery. He also rented houses for Jewish refugees with embassy funds and put up fake signs such as "The Swedish Library" and "The Swedish Research Institute" on their doors. He housed other refugees in the Swedish legation in Budapest. He skillfully negotiated with Nazi officials such as Adolf Eichmann, and the commander of the German Army in Hungary, General Gerhard Schmidthuber, and got them to cancel deportations to German concentration camps by having his fascist ally, Pál Szalay, deliver a note in which Wallenberg threatened to have them prosecuted for war crimes. This was just two days before the Russians arrived.

According to the Israeli organization Yad Vashem, Wallenberg is credited with personally saving the lives of many thousands of Hungarian Jews. One story credits him with either threatening or persuading a German general to ignore orders from Adolf Hitler to destroy the ghettos and kill the remaining inhabitants in the last desperate days before Budapest's liberation. This may be merely apocryphal, but if true, the number of people saved by Wallenberg's actions would rise to about 100,000. When the Russians finally took over, they found 97,000 Jews living in Budapest's two ghettos. In total, roughly 204,000, of the pre-war population of about 800,000, Hungarian Jews survived.

Wallenberg was arrested by the Soviet Red Army on January 17, 1945, as they entered Budapest, probably on suspicion of espionage for the United States. He was taken to Lubyanka in Moscow, with his driver Langfelder. Wallenberg was then transferred to Lefortovo prison in another part of Moscow for a further two years.

On February 6, 1957, under international pressure, the Soviets released a document they claimed to have found in their archives stating that "the prisoner Wallenberg, who is known to you, died last night in his cell." The document was dated July 17, 1947, and was signed by Smoltsov, then head of the Lubyanka prison infirmary, the notorious KGB prison. The note was addressed to Viktor Abakumov, the Soviet minister of state security. However, the Soviets did not explain why they had not released this information earlier. In 1989, the Soviets returned his personal belongings to his family. His passport, money, daybook, and clothing were returned; his personal papers, however, were not.

There were many reports of sightings long after the official date of his death. Prisoners released from the Gulag claimed to have seen a foreign inmate answering to Wallenberg's description as late as 1990. A number of testimonies have placed him in Siberian or Russian prisons as late as 1981.

All over the world, many people think Wallenberg is still alive and demand that he be released from his Russian captivity. In Sweden and other countries—mainly the U.S.—Raoul Wallenberg associations work endlessly to find answers to what happened Raoul Wallenberg.[1]

Josyp Terelya, the Ukrainian activist who was imprisoned by the Soviets for refusing to abandon his nationalism and Catholic faith, wrote in his autobiography that he believes he was jailed with Wallenberg. He drew pictures and devoted a significant portion of his autobiography to this man and his influence on Terelya.