The Proterozoic eon is an interval of geologic time of nearly 2 billion years extending from about 2500 million years ago (mya) to about 542 mya. The Proterozoic eon is framed at its earliest boundary by the end of the Archean eon and at its more recent boundary by the start of the Phanerozoic eon, which begins with the appearance of abundant macroscopic hard-shelled animals in the fossil record and extends to the present time.

During the Proterozoic eon, eukaryotes (cells with a distinct nucleus) first appear in the fossil record about 1.7 billion years ago. Over the next billion years the eukaryotes greatly diversified until by the later Proterozoic there were abundant soft-bodied, multicellular organisms—although, being soft-bodied, they were only rarely preserved by fossilization. Another process occurring primarily during the Proterozoic eon was a transition to an oxygenated atmosphere, which made it possible for the more complex multicellular organisms to meet their energy needs. The Proterozoic eon thus provided the foundation for the explosion of life forms, including most phyla of animals, (the so-called Cambrian explosion) that marks the beginning of the Phanerozoic eon. 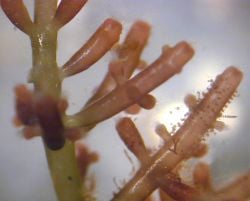 This red algae's ancestors, dating from 1200 million years ago in the Proterozoic eon, are thought to have been the first multicellular organisms.

The Paleoproterozoic era is an interval of 900 million years during which the continents first stabilized, eukaryotic (nucleated) cells developed, oxygen-producing photosynthetic bacteria developed, and oxygen from the bacteria combined with iron in the oceans to form most of Earth's banded iron formations.

The Mesoproterozoic era is an interval of 600 million years whose signature events are the formation and break up of supercontinents and the development of sexual reproduction in organisms.

The Neoproterozoic era is an interval of 458 million years during which Earth was hit by the most severe glaciations known—to the extent that ice sheets reached the equator. In the later parts of the era, the earliest evidence of multicelled life is found, including the earliest animals.

The first known glaciations occurred during the Proterozoic eon; one began shortly after the eon opened and there were at least four during its closing era, the Neoproterozoic. These episodes climaxed with the "Snowball Earth" of the Varangian (or Ediacaran) glaciation (Stanley 1999).

The build-up of oxygen

Did you know?
One of the most important events of the Proterozoic was the build up of oxygen in Earth's atmosphere

One of the most important events of the Proterozoic was the build up of oxygen in Earth's atmosphere. Until roughly 2.3 billion years ago, oxygen was probably only one to two percent of its current level (Stanley 1999).Though oxygen was undoubtedly released by photosynthesis well back in Archean times, it could not build up to any significant degree until the primary chemical "sinks"—unoxidized sulfur and iron—had been filled, that is until much of the sulfur and iron had reacted with oxygen to form oxides. Banded iron formations (BIFs) are the result of the operation of the unoxidized iron sink in which, through an irregular periodic process not yet well understood, many alternating layers of mixed iron oxides covered over with lighter weight sediments were deposited on the ocean bottoms. The BIFs provide most of the world's iron ore; most accumulation of BIFs ceased after 1.9 billion years ago, through a process that also is not well understood, but is thought to be due to either an increase in oxygen or a more thorough mixing of the oceanic water column (Stanley 1999).

Red beds, which are colored by hematite (a particular type of iron oxide), indicate an increase in atmospheric oxygen less than two billion years ago; they are not found in older rocks (Stanley 1999). The oxygen build-up was probably due to two factors: A filling of the chemical sinks, and an increase in carbon burial, which sequestered organic compounds that would have otherwise been oxidized by the atmosphere (Stanley 1999).

One of the major developments in life is the transition from prokaryotes (non-nucleated cells) to eukaryotes (nucleated cells). Mayr (2001) states that the origin of eukaryotes is "perhaps the most important and dramatic event in the history of life." Prokaryotes originated in the Archean eon, with fossils known from about 3.5 billion years ago (3500 mya). The first fossils of eukaryote organisms are known from the subsequent Proterozoic eon, tracing to about 1.7 billion years ago (Mayr 2001). Eukaryotes, however, may have actually originated during the Archean eon and simply not left any fossils (Stanley 1999).

Mayr (2001) speculates that eukaryotes may have originated one billion years prior to the first findings of eukaryote fossils. He notes that lipids, by-products of eukaryotic metabolism, have been found in rocks that are 2700 million years old, dating from the Archean eon. There is a possibility, however, that these molecules percolated down from more recent strata into these older strata, although most geologists deny this possibility (Mayr 2001).

During the Proterozic eon, eukaryotes greatly diversified, and by the late Proterozoic there were abundant soft-bodied, multicellular organisms.

The oldest shelled fossils are those of the Ediacaran period, which ranges from approximately 635 to 542 million years before the present and is the youngest or closing period of the Proterozoic eon. The Ediacaran biota is occasionally referred to as the Vendian biota. This usage echoes the former name Vendian, by which the Ediacaran period was known in Russia and some other parts of the world before the official naming of the period in 2004. The Ediacaran fossils are the oldest definite multicellular fossils. According to Mayr (2001), Ediacaran fossils from the late Proterozoic contain "many strange types as well as others clearly related to the Cambrian types." (The Cambrian period follows immediately after the Ediacaran period.)

The first advanced single-celled and multi-cellular life roughly coincides with the oxygen accumulation; this may have been due to an increase in the oxidized nitrates that eukaryotes use, as opposed to cyanobacteria (Stanley 1999). It was also during the Proterozoic that the first symbiotic relationship between mitochondria (for animals and protists) and chloroplasts (for plants) and their hosts evolved (Stanley 1999).

The blossoming of eukaryotes, such as acritarchs, did not preclude the expansion of cyanobacteria; in fact, stromatolites (structures thought to have been formed by microorganisms, particularly cyanobacteria) reached their greatest abundance and diversity during the Proterozoic, peaking roughly 1.2 billion years ago (Stanley 1999).

Classically, the boundary between the Proterozoic eon and the Paleozoic era (within the Phanerozoic eon) was set at the base of the Cambrian period, when the first fossils of animals known as trilobites and archeocyathids appeared. In the second half of the twentieth century, a number of fossil forms have been found in Proterozoic rocks (the Ediacaran fossils), but the upper boundary of the Proterozoic has remained fixed at the base of the Cambrian, which is currently placed at 542 mya. Most animal phyla appeared in the late Proterozoic and early Cambrian, about 565-530 mya in what has been popularly called the Cambrian explosion because the appearance was so geologically sudden and simultaneous. Mayr (2001) notes that the Cambrian fossils appeared "seemingly full-fledged" and that "no fossils intermediate between them have been found and no living intermediates are in existence."