The Neoproterozoic is the terminal era of the Proterozoic eon (or informally, the Precambrian) extending from about 1,000 million years ago (mya) at the end of the Mesoproterozoic to 542 mya at the beginning of the Cambrian of the Paleozoic era. It is one of three major divisions (eras) of the Proterozoic in the geologic time scale.

The Neoproterozoic covers one of the more interesting times in the geological record, during which the Earth was hit by the most severe glaciations known (during which ice sheets reached the equator); and in the later parts of the era, the Ediacaran period, the earliest evidence of multi-celled life is found, including the earliest animals. At the end of the period, at the cusp of the Cambrian, the characteristic community of fossils disappear, leaving only fragments of this once-thriving ecosystem, and a mystery as to their relationship to the distinct Cambrian biota that would appear. Nonetheless, this period provided a foundation for the modern world that would arise.

The Neoproterozic extended from 1,000 to 542 +/- 0.3 million years ago (Gradstein et al. 2005). It is further subdivided into the Tonian, Cryogenian, and Ediacaran periods. The most severe glaciation known in the geologic record occurred during the Cryogenian, when ice sheets reached the equator and formed a possible "Snowball Earth." The earliest fossils of multicellular life are found in the Ediacaran, including the earliest animals. It is believed that there were abundant soft-bodied, multicellular organisms during the Neoproterozoic, but being soft-bodied, fossilization was rare.

At the onset of the Neoproterozoic, the supercontinent Rodinia, which had assembled during the late Mesoproterozoic, straddled the equator. During the Tonian, rifting commenced, which broke Rodinia into a number of individual land masses. Possibly as a consequence of the low-latitude position of most continents, several large-scale glacial events occurred during the era including the Sturtian and Marinoan glaciations.

Did you know?
The greatest ice ages occurred during the Neoproterozoic

The Sturtian and Marinoan glaciations, of the Cryogenian period, were the greatest ice ages known to have occurred on Earth. They are believed to have been so severe that there were ice sheets at the equator—a state described as the "Snowball Earth." The Snowball Earth hypothesis as it was originally proposed (Kirschvink 1992) suggests that the Earth was entirely covered by ice during parts of the Cryogenian period, from 790 to 630 mya. This hypothesis was developed to explain sedimentary deposits generally regarded as of glacial origin at seemingly tropical latitudes, and other enigmatic features of the Cryogenian geological record. The existence of a Snowball Earth remains controversial. The main debate involves whether these glaciations are truly global events or whether they are localized glaciations and not a worldwide event. In particular, the hypothesis is contested by various scientists who dispute the geophysical feasibility of a completely frozen ocean, or the geological evidence on which the hypothesis is based.

The nomenclature for the terminal period of the Neoproterozoic has been unstable. Russian geologists referred to the last period of the Neoproterozoic as the Vendian, and the Chinese called it the Sinian, and most Australians and North Americans used the name Ediacaran. However, in 2004, the International Union of Geological Sciences ratified the Ediacaran age to be a geological age of the Neoproterozoic, ranging from 630 +5/-30 to 542 +/- 0.3 million years ago (Gradstein et al. 2005). The Ediacaran boundaries are the only Precambrian boundaries defined by biologic Global Boundary Stratotype Section and Points, rather than the absolute Global Standard Stratigraphic Ages.

Although the Ediacaran Period does contain soft bodied fossils, it is unusual in comparison to later periods because its beginning is not defined by a change in the fossil record. Rather, the beginning is defined at the base of a chemically distinctive carbonate layer, referred to as a "cap carbonate," because it caps glacial deposits and indicates a sudden climatic change at the end of an ice age. This bed is characterized by an unusual depletion of 13C, and is considered by many scientists to be of global extent, although this is controversial. 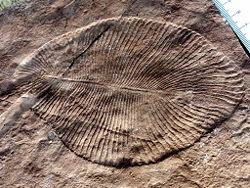 Dickinsonia costata, an Ediacaran organism of unknown affinity, with a quilted appearance.

The idea of the Neoproterozoic era came on the scene relatively recently—after about 1960. Nineteenth century paleontologists set the start of multicelled life at the first appearance of hard-shelled animals called trilobites and archeocyathids. This set the beginning of the Cambrian period. In the early twentieth century, paleontologists started finding fossils of multicellular animals that predated the Cambrian boundary. A complex fauna was found in South West Africa in the 1920s, but was mis-dated. Another was found in South Australia in the 1940s. but was not thoroughly examined until the late 1950s. Other possible early fossils were found in Russia, England, Canada, and elsewhere. Some were determined to be pseudofossils, but others were revealed to be members of rather complex biotas that are still poorly understood. At least 25 regions worldwide yielded metazoan fossils prior to the classical Cambrian boundary (Knoll et al. 2006).

"Ediacara biota" is the name for the ancient lifeforms of the Ediacaran Period, which represent the earliest known complex multicellular organisms. They appeared soon after the Earth thawed from the Cryogenian period's extensive glaciers, and largely disappeared soon before the rapid appearance of biodiversity known as the Cambrian explosion. It was the Cambrian period that saw the first appearance in the fossil record of the basic patterns and body-plans that would go on to form the basis of modern animals. Little of the diversity of the Ediacara biota would seem to be incorporated in this new scheme, with a distinct Cambrian biota arising and usurping the organisms that dominated the Ediacaran fossil record.

The organisms of the Ediacaran period first appeared around 580 mya and flourished until the cusp of the Cambrian 542 mya, when the characteristic communities of fossils vanished. While rare fossils that may represent survivors have been found as late as the Middle Cambrian (510 to 500 million years ago), the earlier fossil communities disappear from the record at the end of the Ediacaran, leaving only controversial fragments of once-thriving ecosystems, if anything (Conway Morris 1993). Multiple hypotheses exist to explain this disappearance, including preservation bias, a changing environment, the advent of predators, and competition from other lifeforms.

A few of the early animals in the Ediacara biota appear possibly to be ancestors of modern animals. Most fall into ambiguous groups of frond-like animals; discoids that might be holdfasts for stalked animals ("medusoids"); mattress-like forms; small calcaerous tubes; and armored animals of unknown provenance. These were most commonly known as Vendian biota until the formal naming of the period, and are currently known as Ediacaran biota. Most were soft bodied. The relationships, if any, to modern forms are obscure. Some paleontologists relate many or most of these forms to modern animals. Others acknowledge a few possible or even likely relationships but feel that most of the Ediacaran forms are representatives of (an) unknown animal type(s).

Classification is difficult, and the assignment of some species even at the level of kingdom—animal, fungus, protist or something else—is uncertain: One paleontologist has even gained support for a separate kingdom Vendozoa (now renamed Vendobionta) (Seilacher 1992). Their strange form and apparent disconnectedness from later organisms have led some to consider them a "failed experiment" in multicellular life, with later multicellular life independently re-evolving from unrelated single-celled organisms (Narbonne 2006).

In addition to Ediacaran biota, later two other types of biota were discovered in China (the so-called Doushantuo formation and Hainan formation).

Retrieved from https://www.newworldencyclopedia.org/p/index.php?title=Neoproterozoic&oldid=1000457
Categories:
Hidden category:
This page was last edited on 12 October 2016, at 16:56.
Content is available under Creative Commons Attribution/Share-Alike License; additional terms may apply. See Terms of Use for details.