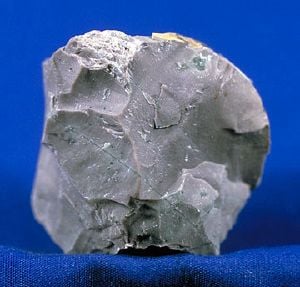 A sample of chert.

Chert is a fine-grained, silica-rich, microcrystalline, cryptocrystalline or microfibrous sedimentary rock that may contain small fossils. It varies greatly in color (from white to black), but most often manifests as gray, brown, grayish brown and light green to rusty red; its color is an expression of trace elements present in the rock, and both red and green are most often related to traces of iron (in its oxidized and reduced forms, respectively).

Chert occurs as oval to irregular nodules in greensand, limestone, chalk, and dolostone formations as a replacement mineral, where it is formed as a result of some type of diagenesis. Where it occurs in chalk, it is usually called flint. It also occurs in thin beds, when it is a primary deposit (such as with many jaspers and radiolarites). Thick beds of chert occur in deep geosynclinal deposits. These thickly bedded cherts include the novaculite of the Ouachita Mountains of Arkansas, Oklahoma, and similar occurrences in Texas in the United States. The banded iron formations of Precambrian age are composed of alternating layers of chert and iron oxides.

There is much confusion concerning the exact meanings and differences among the terms "chert," "chalcedony" and "flint" (as well as their numerous varieties). In petrology the term "chert" is used to generally refer to all rocks composed primarily of microcrystalline, cryptocrystalline and microfibrous quartz. The term does not include quartzite. Chalcedony is a microfibrous (microcrystaline with a fibrous structure) variety of quartz. Strictly speaking, the term "flint" is reserved for varieties of chert which occur in chalk and marly limestone formations.[1][2] Among non-geologists (in particular among archaeologists), the distinction between "flint" and "chert" is often one of quality—chert being lower quality than flint. This usage of the terminology is prevalent in America and is likely caused by early immigrants who imported the terms from England where most true flint (that found in chalk formations) was indeed of better quality than "common chert" (from limestone formations). Among petrologists, chalcedony is sometimes considered separately from chert due to its fibrous structure. Since many cherts contain both microcrystaline and microfibrous quartz, it is sometimes difficult to classify a rock as completely chalcedony, thus its general inclusion as a variety of chert.

The cryptocrystalline nature of chert, combined with its above average ability to resist weathering, recrystallisation and metamorphism has made it an ideal rock for preservation of early life forms.[3]

In prehistoric times, chert was often used as a raw material for the construction of stone tools. Like obsidian, as well as some rhyolites, felsites, quartzites, and other tool stones used in lithic reduction, chert fractures in a Hertzian cone when struck with sufficient force. This results in conchoidal fractures, a characteristic of all minerals with no cleavage planes. In this kind of fracture, a cone of force propagates through the material from the point of impact, eventually removing a full or partial cone; this result is familiar to anyone who has seen what happens to a plate-glass window when struck by a small object, such as an airgun projectile. The partial Hertzian cones produced during lithic reduction are called flakes, and exhibit features characteristic of this sort of breakage, including striking platforms, bulbs of force, and occasionally eraillures, which are small secondary flakes detached from the flake's bulb of force.

When a chert stone is struck against steel, sparks result. This makes it an excellent tool for starting fires, and both flint and common chert were used in various types of fire-starting tools, such as tinderboxes, throughout history. A primary historic use of common chert and flint was for flintlock firearms, in which the chert striking a metal plate produces a spark that ignites a small reservoir containing black powder, discharging the firearm.

In some areas, chert is ubiquitous as stream gravel and fieldstone and is currently used as construction material and road surfacing. Part of chert's popularity in road surfacing or driveway construction is that rain tends to firm and compact chert while other fill often gets muddy when wet. However, where cherty gravel ends up as fill in concrete, the slick surface can cause localized failure. Hauled prices for chert of less than $10 to $15 per ton are not uncommon in many parts of the U.S.

Chert has been used in late nineteenth-century and early twentieth-century headstones or grave markers in Tennessee and other regions.

There are numerous varieties of chert, classified based on their visible, microscopic and physical characteristics.[8][9] Some of the more common varieties are:

Other lesser used terms for chert (most of them archaic) include, firestone, silex, silica stone and flintstone.

Retrieved from https://www.newworldencyclopedia.org/p/index.php?title=Chert&oldid=1003201
Categories:
Hidden category:
This page was last edited on 9 February 2017, at 19:35.
Content is available under Creative Commons Attribution/Share-Alike License; additional terms may apply. See Terms of Use for details.