Opal is a mineraloid[1] that can form or replace fossils. The resulting fossils, though not of any extra scientific interest, appeal to collectors because of the stones' myriad combinations of beautiful hues. Coloration can range the full spectrum from white to black and almost everything in between. Occurring in most varieties of rock, the vast majority of opals are mined in Australia, with other opal digs occurring in the United States, Mexico, Peru, and Brazil.

Opals range in quality from gemstone, composed of tightly arranged silica spheres producing a unique depth of color, to common opals that have a blander range of coloration due to their gradual formation in wood. Other varieties of opal, ranging from translucent to semi-opaque, round out this remarkably attractive mineraloid.

Opal is a mineraloid gel that is deposited at relatively low temperature and may occur in the fissures of almost any kind of rock, being most commonly found with limonite, sandstone, rhyolite, and basalt.

Opals were relatively rare until the early 1800s, when several rich sources were discovered and the gem quickly grew in popularity.

Australia produces around 97 percent of the world’s opal. Of that, about 90 percent is called light opal or white and crystal opal. White makes up 60 percent, and all the opal fields produce white opal; crystal opal or pure hydrated silica makes up 30 percent; 8 percent is black, and only two percent is boulder opal. The town of Coober Pedy in South Australia (see below) is a major source of opal. Another Australian town, Lightning Ridge in New South Wales, is the main source of black opal—opal containing a predominantly dark background (dark-gray to blue-black, displaying a play of color).

Fire opal is found mostly in Mexico and Mesoamerica. In Honduras, good quality black opal has been mined from volcanic ash deposits. This opal is known for its stability. There is also opal in South America. The Brazilian city of Pedro II has produced opal that was discovered in 1930.

The Virgin Valley Opal Fields in northern Nevada produce black, crystal, white, and fire opal. Most precious opals are wood replacements. Discovered in 1904, the mines are still producing gem materials in large amounts to hundreds of seasonal visitors. Three mines provide the public an opportunity to mine the gems themselves, for a fee. The largest black opal in the Smithsonian Museum comes from these mines.

Another source of white base opal in the United States is Spencer, Idaho. A high percentage of the opal found there occurs in thin layers. As a result, most of the production goes into the making of doublets and triplets.

The mineraloid opal is amorphous, hydrated silicon dioxide (SiO2•nH2O). Its water content is sometimes as high as 20 percent but is usually between three and ten percent. Opal ranges from colorless through white, milky blue, gray, red, yellow, green, brown, and black. Common opal is truly amorphous, but precious opal does have a structural element. The word opal comes from the Sanskrit upala, the Greek opallios, and the Latin opalus, meaning "precious stone." 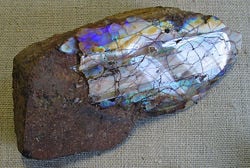 Precious opal shows a variable interplay of internal colors and has an internal structure. At the microscale, precious opal is composed of hexagonal or cubic closely packed silica spheres some 150 to 300 nanometers in diameter. These ordered silica spheres produce the internal colors by causing the interference and diffraction of light passing through the microstructure of opal (Klein and Hurlbut, 444). In addition, microfractures may be filled with secondary silica and form thin lamellae inside the opal during solidification. The term opalescence is commonly and erroneously used to describe this unique and beautiful phenomenon, which is correctly termed play of color. Contrarily, opalescence is correctly applied to the milky, turbid appearance of common or potch opal. Potch does not show a play of color.

The veins of opal displaying the play of color are often quite thin, and this has given rise to unusual methods of preparing the stone as a gem. An opal doublet is a thin layer of colorful material, backed by a black mineral, such as ironstone, basalt, or obsidian. The darker backing emphasizes the play of color and results in a more attractive display than a lighter potch. Given the texture of opals, they can be quite difficult to polish to a reasonable luster. The triplet cuts back the colored material with a dark backing, and then has a cap of clear quartz (rock crystal) on top, which takes a high polish and acts as a protective layer for the comparatively delicate opal.

Besides the gemstone varieties that show a play of color, there are other kinds of common opal. They include the milk opal, milky bluish to greenish; resin opal, honey-yellow with a resinous luster; wood opal, caused by the replacement of the organic material in wood with opal; menilite brown or grey; hyalite, a colorless glass-clear opal sometimes called Muller's Glass; geyserite, (siliceous sinter) deposited around hot springs or geysers; and diatomite or diatomaceous earth, the accumulations of diatom shells or tests. 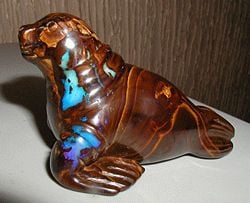 Boulder opal carving of a walrus

Boulder opal consists of concretions and fracture fillings in a dark siliceous ironstone matrix. It is found sporadically in western Queensland, Australia, from Kynuna in the north to Yowah and Koroit opal field in the south.

Fire opal is a translucent to semi-opaque stone that is generally yellow to bright orange and sometimes nearly red. When viewed at certain angles, it displays pleochroism (the property of exhibiting different colors when viewed from different directions under transmitted light).

Peruvian opal (also called blue opal) is a semi-opaque to opaque, blue-green stone found in Peru. It is often cut to include the matrix in the more opaque stones. It does not display pleochroism.

As well as occurring naturally, opals of all varieties have been synthesized experimentally and commercially. The discovery of the ordered sphere structure of precious opal led to its synthesis by Pierre Gilson in 1974 (Klein and Hurlbut, 528). The resulting material is distinguishable from natural opal by its regularity; under magnification, the patches of color are seen to be arranged in a "lizard skin" or "chicken wire" pattern. Synthetics are further distinguished from naturals by the former's lack of fluorescence under ultraviolet light. Synthetics are also generally lower in density and are often highly porous; some may even stick to the tongue.

Two notable producers of synthetic opal are the Kyocera and Inamori companies of Japan. Most so-called synthetics, however, are more correctly termed imitations, as they contain substances (such as plastic stabilizers) not found in natural opal. The imitation opals seen in vintage jewelry are often "Slocum Stone" consisting of laminated glass with bits of foil interspersed.

The town of Coober Pedy

The "Opal Capital of the World" is found deep in the outback of South Australia. The town of Coober Pedy began in 1915 when a teenager overturned a "Surface Opal Nobbie" while gold prospecting with his father. Today, nearly half of the town has burrowed underground to escape the surface heat which can hit 135 °F. This population lives in affordable, underground homes called "dugouts," which remain a cool 72 °F year round. Many opal producing fields are located within a 24-mile radius of the town. Tourists enjoy strolling the area which has been compared to a "lunar landscape," and occasionally they kick up an opal, just the way the town's founding son did (Coober Pedy is an aboriginal term meaning "White man's burrow")

Retrieved from https://www.newworldencyclopedia.org/p/index.php?title=Opal&oldid=1087933
Categories:
Hidden category:
This page was last edited on 18 November 2022, at 00:45.
Content is available under Creative Commons Attribution/Share-Alike License; additional terms may apply. See Terms of Use for details.