Seven Wonders of the World 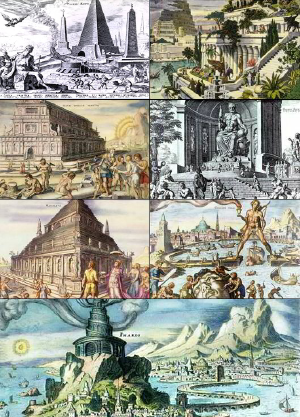 The Seven Wonders of the Ancient World (from left to right, top to bottom): Great Pyramid of Giza, Hanging Gardens of Babylon, Temple of Artemis, Statue of Zeus at Olympia, Mausoleum of Maussollos, Colossus of Rhodes, and the Lighthouse of Alexandria as depicted by sixteenth-century Dutch artist Maarten van Heemskerck.

The Seven Wonders of the World (or the Seven Wonders of the Ancient World) is a widely known list of seven remarkable constructions of antiquity. It was based on guide-books popular among Hellenic sightseers and includes only works located around the Mediterranean rim. Later lists include those for the medieval world and the modern world.

The original Seven Wonders of the World consists of: The Great Pyramid of Giza (the most ancient as well as the only surviving structure), the Hanging Gardens of Babylon, the Temple of Artemis at Ephesus, the Statue of Zeus at Olympia, the Mausoleum of Maussollos at Halicarnassus, the Colossus of Rhodes, and the Lighthouse of Alexandria.

The notion of "Seven Wonders" can be traced to a Hellenistic recognition of trans-cultural human achievement that found expression throughout the Hellenistic world. For thousands of years, the Seven Wonders of the World have inspired humankind as representative works symbolic of the great civilizations of antiquity. In terms of innovative design, elaborate construction, technological mastery, and symbolic meaning, the Seven Wonders have not only showcased the high points of diverse civilizations, but tied humankind together in the common pursuit of intellectual excellence and self-expression.

Seven Wonders of the Ancient World

The historian Herodotus and the scholar Callimachus of Cyrene (c. 305 – 240 B.C.E.) made early lists of "seven wonders," but these writings have not survived, except as references. The earliest extant version of a list of seven wonders was compiled by Antipater of Sidon, who described the structures in a poem around 140 B.C.E.:

I have set eyes on the wall of lofty Babylon on which is a road for chariots, and the statue of Zeus by the Alpheus, and the hanging gardens, and the Colossus of the Sun, and the huge labor of the high pyramids, and the vast tomb of Mausolus; but when I saw the house of Artemis that mounted to the clouds, those other marvels lost their brilliancy, and I said, "Lo, apart from Olympus, the Sun never looked on aught so grand"[1]

A later list, under various titles such as De septem orbis spactaculis and traditionally, though incorrectly, attributed to the engineer Philo of Byzantium, may date as late as the fifth century C.E., although the author writes as if the Colossus of Rhodes, destroyed by an earthquake in 224 B.C.E., were still standing.

The basic characteristics of each of the Seven Wonders are given in the table below:

Did you know?
Instead of the Seven "Wonders" the ancient Greeks spoke of "theamata" or "sights," "things worth seeing"

The Greek category to describe what people call "wonders" today was "theamata," which translates as "something worth seeing" or "must-sees." Since the list came mostly from ancient Greek writings, only sites that would have been known and visited by the ancient Greeks were included. Sites from eastern Asia, the Americas, Africa, and northern Europe were thus omitted. Five of the seven entries are a celebration of Greek accomplishments in the arts and architecture (the exceptions being the Pyramids of Giza and the Hanging Gardens of Babylon). Antipater's earlier list replaced the Lighthouse of Alexandria with the Babylon's famous Ishtar Gate.

It was not until the sixth century C.E. that the list above was used. Of these wonders, the only one that has survived to the present day is the Great Pyramid of Giza. One of wonders, the Temple of Artemis, was destroyed intentionally, first by arson and finally by a mob allegedly led by the Christian bishop St. John Chrysostom. The Statue of Zeus was destroyed by fire. Four of the wonders were destroyed by earthquakes—the Hanging Gardens, the Lighthouse of Alexandria, the Colossus of Rhodes, and the Mausoleum of Maussollos. (The existence of the Hanging Gardens, however, has not been definitively proven.) There are sculptures from the Mausoleum of Maussollos and the Temple of Artemis in the British Museum in London. 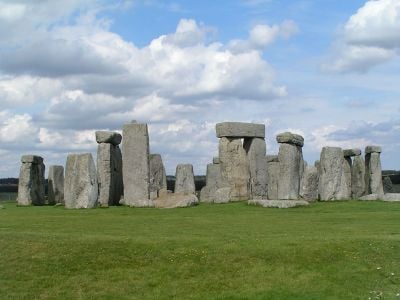 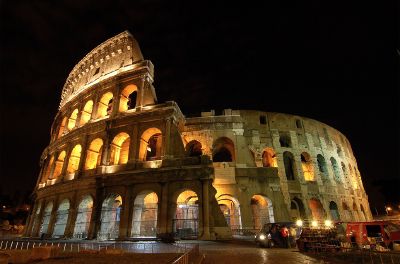 The following is a typical representative of such lists:

Other sites that have been mentioned include:

Many lists have been made of the greatest structures built during modern times or of the greatest wonders existing today. Some of the most notable lists are presented below.

The American Society of Civil Engineers compiled a list of wonders of the modern world:[3] 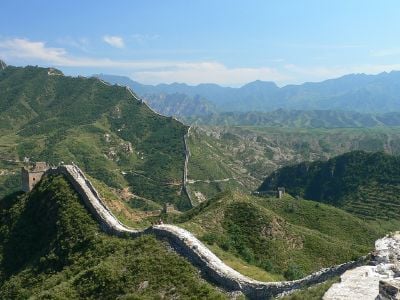 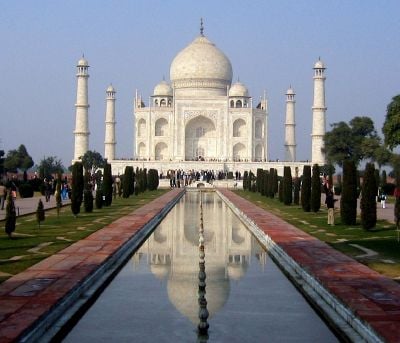 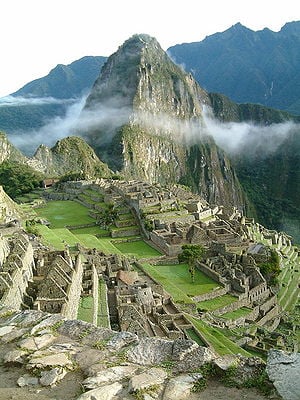 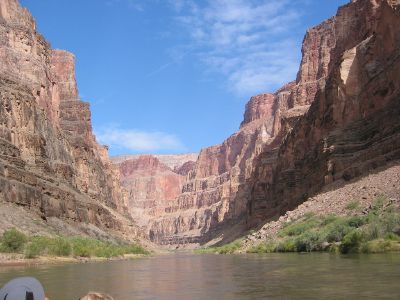 In 2001, an initiative was started by the Swiss corporation New7Wonders Foundation to choose the New Seven Wonders of the World from a selection of 200 existing monuments for profit.[4] Twenty-one finalists were announced on January 1, 2006.[5] Egypt was not happy with the fact that the only original wonder would have to compete with the likes of the Statue of Liberty, the Sydney Opera House, and other landmarks; and called the project absurd. To solve this, Giza was named an honorary Candidate. The results were announced on July 7, 2007 in Benfica's stadium in a big ceremony in Lisbon, Portugal:[6]

Seven Natural Wonders of the World

Similar to the other lists of wonders, there is no consensus on a list of seven natural wonders of the world, as there has been debate over how large the list should be. One of the many lists was compiled by CNN:[8]

Seven wonders of the underwater world 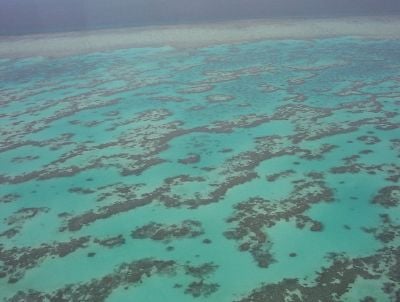 An aerial photograph of the Great Barrier Reef

The Seven Underwater Wonders of the World was a list drawn up by CEDAM International, an American-based non-profit group for divers, dedicated to ocean preservation and research. In 1989, CEDAM brought together a panel of marine scientists, including Dr. Eugenie Clark, to pick underwater areas which they considered to be worthy of protection. The results were announced at The National Aquarium in Washington DC by actor Lloyd Bridges, who played in a TV show titled Sea Hunt:[9]

Seven Wonders of the Industrial World 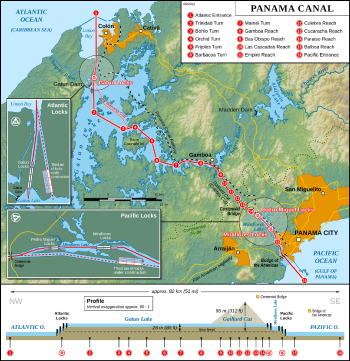 Schematic of the Panama Canal, illustrating the sequence of locks and passages

British author Deborah Cadbury wrote Seven Wonders of the Industrial World, a book telling the stories of seven great feats of engineering of the nineteenth and early twentieth centuries. In 2003 the BBC made a seven-part documentary series on the book, with each episode dramatising the construction one of the wonders. The seven industrial wonders are:

Travel wonders of the world

Travel writer Howard Hillman is one of many such writers who has compiled lists of the top man-made[10] and natural[11] tourist travel wonders of the world. 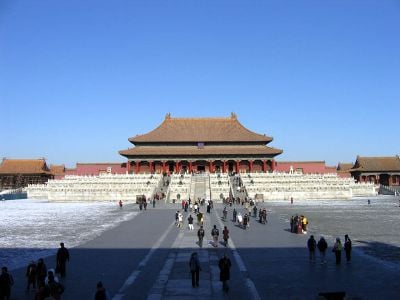 Forbidden City located in the center of Beijing, China 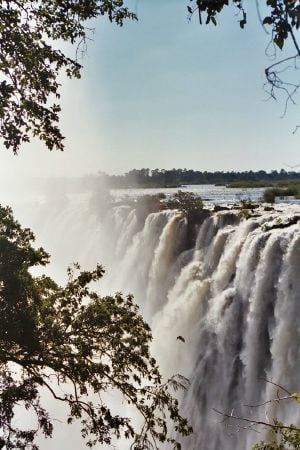 Victoria Falls, seen from the Zambian side.