In 1761 Macpherson announced the discovery of an epic on the subject of Fingal (related to the Irish mythological character Fionn mac Cumhaill/Finn McCool) written by Ossian (or Oisín), son of Fionn mac Cumhail and of Sadb (daughter of Bodb Dearg), who was regarded in legend as the greatest poet of Ireland, and a warrior of the fianna in the Ossianic or Fenian Cycle of Irish mythology.[1] He is the narrator of much of the cycle.

Almost immediately, his story was questioned and he is now generally regarded as the author of the Ossian cycle. Macpherson's work would influence the rise of Romanticism, an artistic and intellectual movement that ran from the late eighteenth century through the nineteenth century. It stressed strong emotion as a source of aesthetic experience. It also elevated folk art, language and custom, as well as arguing for an epistemology based on usage and custom. The Ossian cycle would influence Romantic music as well as literature.

Macpherson was born at Ruthven in the parish of Kingussie, Badenoch, Inverness-shire, Highland. In 1753, he was sent to King's College, Aberdeen, moving two years later to Marischal College (the two institutions later became the University of Aberdeen). He then went to Edinburgh for just over a year, but it is unknown whether he studied at the university. He is said to have written over 4,000 lines of verse while a student; some of this was later published, notably The Highlander (1758), which he is said to have tried to suppress afterwards.

On leaving college, he returned to Ruthven to teach in the school there. At Moffat he met John Home, the author of Douglas, for whom he recited some Gaelic verses from memory. He also showed him manuscripts of Gaelic poetry, supposed to have been picked up in the highlands and islands, and, encouraged by Home and others, he produced a number of pieces translated from the Scottish Gaelic, which he was induced to publish at Edinburgh in 1760 as Fragments of Ancient Poetry collected in the Highlands of Scotland. Dr Hugh Blair, who was a firm believer in the authenticity of the poems, raised a subscription to allow Macpherson to pursue his Gaelic researches.

In the autumn he set out to visit western Inverness-shire, the islands of Skye, North Uist, South Uist and Benbecula. He obtained manuscripts which he translated with the assistance of Captain Morrison and the Rev. A Gallie. Later in the year he made an expedition to Mull, Argyll, when he obtained other manuscripts. 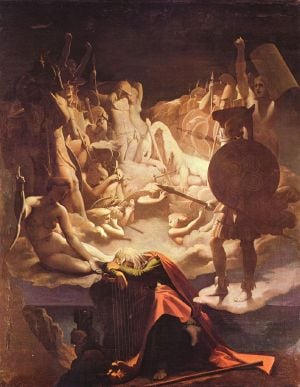 In December 1761, Macpherson published Fingal, an Ancient Epic Poem in Six Books, together with Several Other Poems composed by Ossian, the Son of Fingal, translated from the Gaelic Language, written in the musical measured prose of which he had made use in his earlier volume. Temora followed in 1763, and a collected edition, The Works of Ossian, in 1765. The name Fingal or Fionnghall means "white stranger";[2] it is suggested that the name was rendered as Fingal through a derivation of the name which in old Gaelic would appear as Finn.[3]

There were immediate disputes about Macpherson's claims, for literary and political reasons. Macpherson promoted a Scottish origin for the material, and was hotly opposed by Irish historians, who felt that their heritage was being appropriated. They noted its technical errors in chronology, its technical errors in the forming of Gaelic names, and commented on the implausibility of many of MacPherson's claims, none of which MacPherson was able to refute. However, both Scotland and Ireland shared a common Gaelic culture during the period in which the poems are set and some Fenian literature common in both countries was composed in Scotland.

A great detractor of the Ossian poems was Samuel Johnson, who asserted (in A Journey to the Western Islands of Scotland, 1775) that MacPherson had found fragments of poems and stories, and then woven them into a romance of his own composition. He asserted that they were not only not authentic, but were, moreover, not even good poetry. Upon being asked, "But Doctor Johnson, do you really believe that any man today could write such poetry?" he famously replied, "Yes. Many men. Many women. And many children."

The controversy raged on into the early years of the nineteenth century, with disputes as to whether the poems were based on Irish sources, on sources in English, on Gaelic fragments woven into his own composition as Samuel Johnson concluded,[4] or largely on Scots Gaelic oral traditions and manuscripts as Macpherson claimed. Scottish author Hugh Blair's 1763 A Critical Dissertation on the Poems of Ossian upheld the work's authenticity against Johnson's scathing criticism and from 1765 was included in every edition of Ossian to lend the work credibility.

Derick Thomson found that Macpherson had collected Scottish Gaelic ballads, employing scribes to record those that were preserved orally and collating manuscripts, but had adapted them by altering the original characters and ideas, and had introduced a great deal of his own.[5] 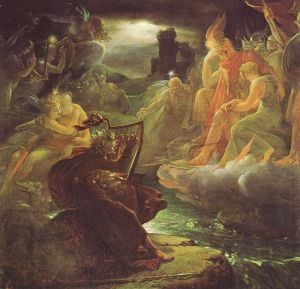 In 1764 he was made secretary to the colonial governor George Johnstone at Pensacola, Florida, and when he returned, two years later, to Great Britain, after a quarrel with Johnstone, he was allowed to retain his salary as a pension. He went on to write several historical works, the most important of which was Original Papers, containing the Secret History of Great Britain from the Restoration to the Accession of the House of Hanover, to which are prefixed Extracts from the Life of James II, as written by himself (1775). He enjoyed a salary for defending the policy of Lord North's government, and held the lucrative post of London agent to nabob of Arcot. He entered parliament in 1780, as Member of Parliament for Camelford and continued to sit until his death. In his later years he bought an estate, to which he gave the name of Belville, in his native county of Inverness, where he died.

After Macpherson's death, Malcolm Laing, in an appendix to his History of Scotland (1800), propounded the extreme view that the so-called Ossianic poems were altogether modern in origin, and that Macpherson's authorities were practically non-existent. Much of Macpherson's matter is clearly his own, and he confounds the stories belonging to different cycles. Apart from the doubtful morality of his transactions he must still be regarded as one of the great Scottish writers. The varied sources of his work and its worthlessness as a transcript of actual Celtic poems do not alter the fact that he produced a work of art which by its deep appreciation of natural beauty and the melancholy tenderness of its treatment of the ancient legend did more than any single work to bring about the romantic movement in European, and especially in German, literature. It was speedily translated into many European languages; Melchiore Cesarotti's Italian translation was one of Napoleon's favorite books.

The poems achieved international succes and were proclaimed as a Celtic equivalent of the Classical writers such as Homer. Many writers were influenced by the works, including the young Walter Scott and the German writer J.W. von Goethe, whose own German translation of a portion of Macpherson's work figures prominently in a climactic scene of The Sorrows of Young Werther.[6] Goethe's associate Johann Gottfried Herder wrote an essay titled Extract from a correspondence about Ossian and the Songs of Ancient Peoples in the early days of the Sturm und Drang movement. The poem was as much admired in Hungary as in France and Germany; Hungarian János Arany wrote "Homer and Ossian" in response, and several other Hungarian writers—Baróti Szabó, Csokonai, Sándor Kisfaludy, Kazinczy, Kölcsey, Ferenc Toldy, and Ágost Greguss—were also influenced by it.[7] The poems also exerted an influence on the burgeoning of Romantic music, and Franz Schubert in particular composed Lieder setting many of Ossian's poems.

His legacy indirectly includes the naming of Fingal's Cave on the island of Staffa. The original gaelic name is An Uamh Bhin, "the melodious cave," but it was renamed by Sir Joseph Banks in 1772 at the height of Macpherson's popularity.[8][9]

Retrieved from https://www.newworldencyclopedia.org/p/index.php?title=James_Macpherson&oldid=1009888
Categories:
Hidden category:
This page was last edited on 18 March 2018, at 20:52.
Content is available under Creative Commons Attribution/Share-Alike License; additional terms may apply. See Terms of Use for details.